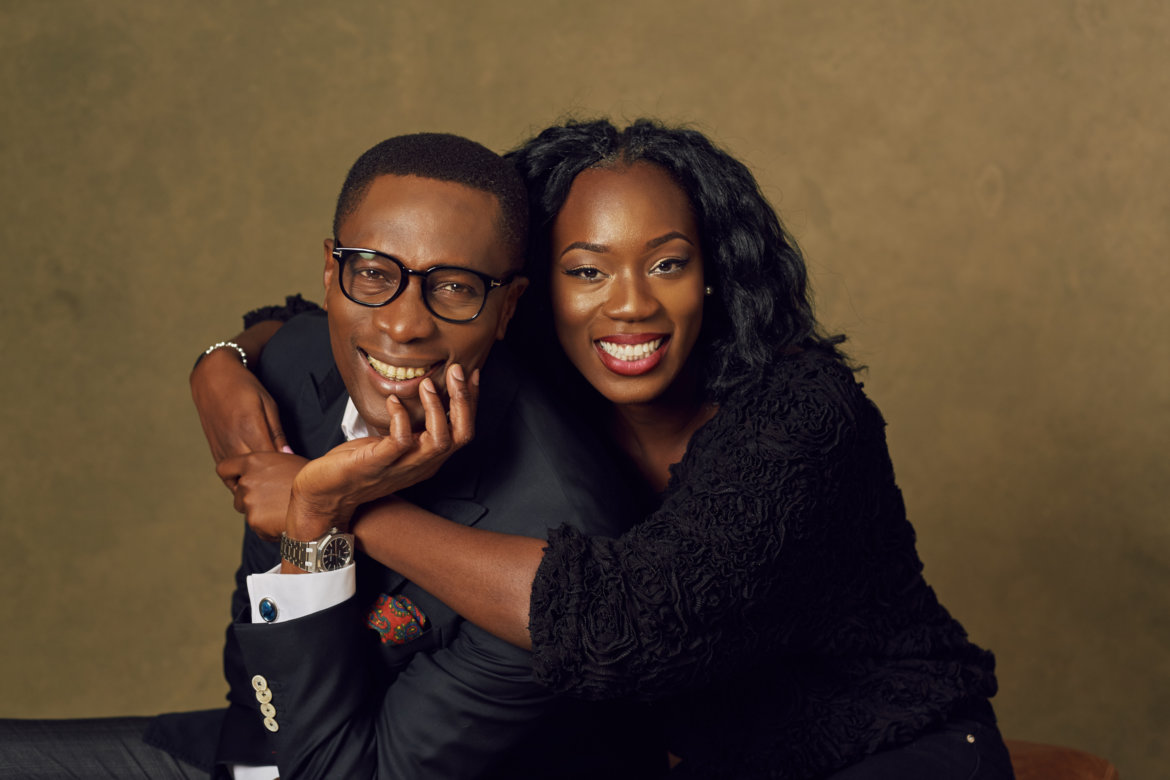 Popular Lagos Pastor, Tony Rapu’s life is as beautiful as his marriage and he pastors one of the most youth-driven congregation in Lagos known as This Present House. He is also in charge of several other districts of the church.He was well celebrated on the pages of newspaper when he clocked 60 as many wrote about their encounters with him and most especially how he has made impact on many important individuals in the society and the nation as a whole.

He is an example of what he preaches on marriage and this has worked for him to have kept his marriage of 30 years to his beautiful wife,Nkoyo. The thorough man of God celebrated his 30th wedding anniversary in Lagos, a few weeks back and it was one of the grand events of 2017. He was seen decked in a lovely black tuxedo suit and his wife opted for a black satin jump-suit.The event was attended by important dignatries from far and near. Pastor Tony is an authority in the institution of marriage and most married men/women and also single individuals trooped out to listen to any of his messages or sermons or tips on marriage. To celebrate the anniversary, The Senior Pastor of This Present House, Dr. Tony Rapu, shared lovely photos of himself and his wife, Nkoyo Rapu, renewing their marriage vows.

It was heartwarming to see them revealing so much love after 30 years of marriage.He also posted a short clip of their wedding video where it had in attendance the general overseer of Redeemed Church, Pastor Enoch Adeboye and his wife, Folu Adeboye,the late pastor of  City of David Church, Pastor Eskor was there and also Pastor Tunde Bakare. Pastor NKOYO RAPU is a lawyer, who has assisted her husband, Dr. Tony Rapu, a Senior Pastor and head of the multi-faceted group of ministries, comprising This Present House, God Bless Nigeria,

The Underground Church and The Waterbrook.The mother of three focuses on issues concerning women and children as a member, co-chairsBoard of Trustees of Freedom Foundation which her husband heads as the Chairman. Born over 50 years ago, pastor Nkoyo Rapu is a woman of diverse interests and skills. She is passionate about the plight of destitute children and founded Bethesda Child Support Agency, a sister organisation to Freedom Foundation to meet basic health and education needs of this group.She is the author of “The Gilded Cage” and “Shining Statues”. She is committed to working with women and children and sits as a member of the Board of Trustees for Freedom Foundation and has a strong passion for education and development. The Bethesda Child Support Agency, a not-for-profit organisation (NGO) currently running four schools in extremely poor neighbourhoods of Lagos, with over 600 pupils on scholarships.

She was also involved in the setting up of some model private academic institutions, including Redeemers International Primary School and Redeemers International secondary school, Lagos having served as the chairperson of the founding Board of both schools.Pastor Nkoyo Rapu also serves on the Board of Elders of The House of Freedom an evangelical movement with four main expressions: The God Bless Nigeria Church, The Water Brook Church, The Underground Church and This Present House.

Her husband, Tony Rapu, was born in Kano on January 1st 1957, the only son to an Igbo Catholic family. He is the fourth of six children. His father, T.D. Rapu, worked with the Nigerian Customs, while his mother, Maria Rapu (nee Ofili), was a teacher. He grew up like any well-bred, middle class young man as those who knew him at King’s College Lagos in the 70’s or in the 80’s at the University of Ibadan where he took a degree in Zoology and later in Medicine would testify.

Their love story is an interesting one, having met while they were in high school in Ibadan, During his Ibadan years, he met Miss Nkoyo Bassey, who was then a pupil at the International School Ibadan (ISI). She was just 16 and he was 20. Reminiscing those days, former Miss Nigeria, Helen Prest-Ajayi, who was Nkoyo’s friend and classmate at ISI says,“I remember those hot, hazy afternoons spent chatting and strolling down our school driveway in the hopes of catching a glimpse of Tee Raps racing by on his ‘Harley Davidson’ … it was the biggest, baddest bike around”…

In 1987 he married Nkoyo Bassey now Rapu, who was by that time a lawyer, working with Allan and Ogunkeye. She had come to know the Lord at a Bible study in the Victoria Island home of Gabriel and Rosalyn Oduyemi. The husband and wife became active members of the then hardly known RCCG and worshiped at the Head Quarters Church in Ebute Metta. The marital journey which started 30 years ago is still waxing stronger with 3 lovely children, 2 girls and a boy added to it.

How Pastor TONY RAPU Fell In Love With His Wife 30 Yrs Ago was last modified: December 24th, 2017 by Tayo Oyediji