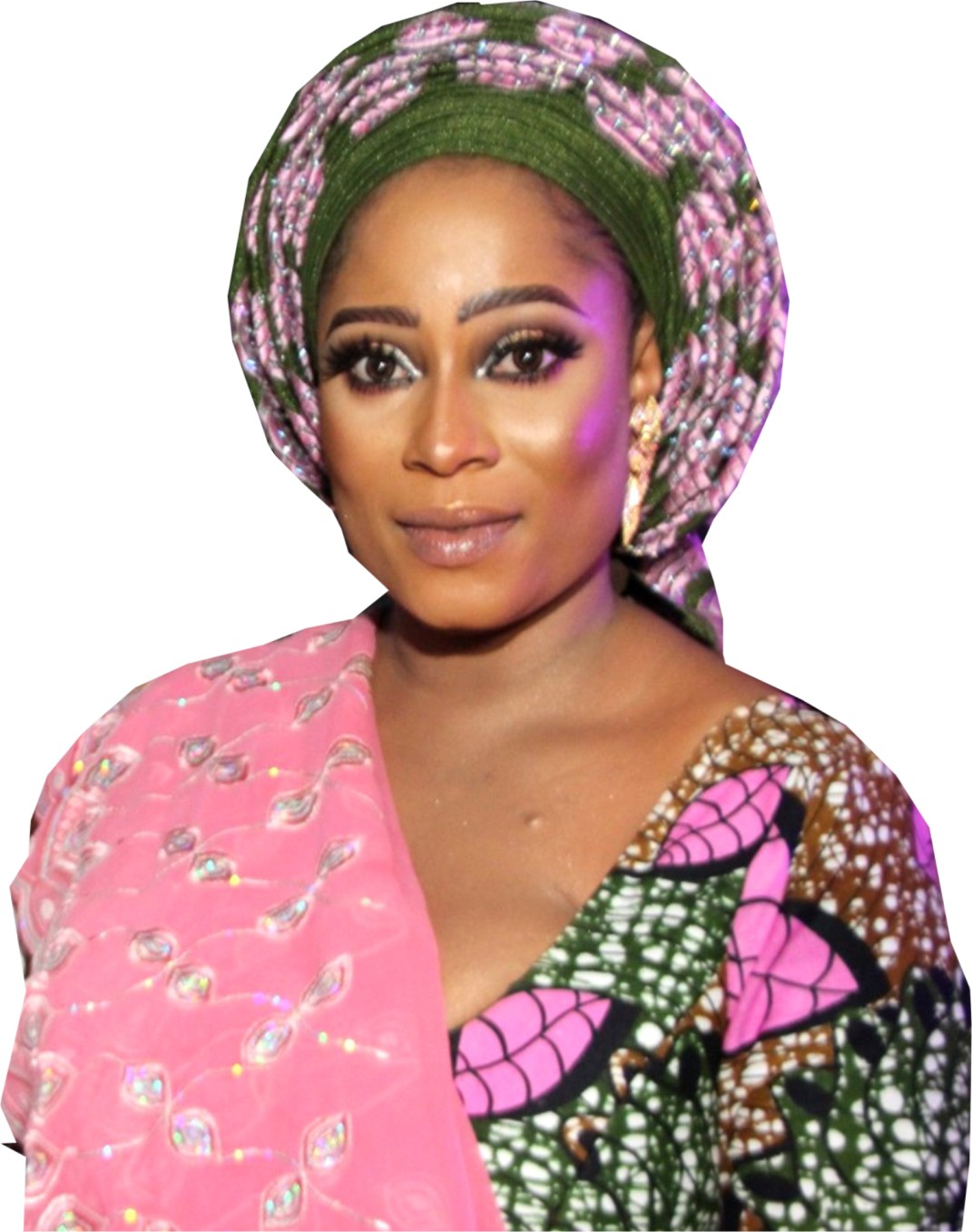 On Sunday, 10th November 2019, at the Balmoral Hall at Oregun in Ikeja Lagos, the high and mighty gathered to celebrate delectable actress, Mojisola Adedeji as she premiered her latest movie entitled:  “Itan Ife” and also celebrated her birthday.

The event was witnessed by lots of big boys in the society and special performances by a popular musician 9ice, Sheikh Ahmad Bukhari and Aiki Mariam who ushered the celebrator in with a special lyric.  Busola Oke and Ere Asalatu were not left out as highly respected fuji Artiste, Alabi  Pasuma, supplied music.

Baba Dugbe and Koyokoyo, who are both popular Radio presenter were the masters of the ceremony. Two different aso ebi were spotted by guests.

The beautiful host who was gorgeously dressed in Aso-Ebi designed by celebrity designer, illumine, had a grand entry with actresses Bukola Adeogo and Folorunsho Adeola as leaders of the train.

It was a fun-filled event as Dj Rexyy and Dj largest were on the wheels of steel, dishing out cool music. There was so much to eat and drink. City People’S Senior Showbiz reporter, BIODUN ALAO, brings you gists from the party.

Kay boy is, indeed, a bunch of talent. He was one of the best performers at the event. He Mimicked movie stars and musicians. He did it so well that one could be deceived to believe that, the real stars were actually the ones on the stage performing. According to him, he has the gene of the stars in his body, because at a point in life, they all had one thing or the other to do with his body and through the process, he tapped from their talents. He started by mimicking star actor, Odunlade Adekola, Femi Adebayo, Afeez Abiodun popularly known as  “Owo”, Sanyeri, and he ended his performance by mimicking Pasuma Wonder. The talented boy got a standing ovation for his outstanding performance.

The highly respected Islamic clergyman stepped into the venue with his entourage. He got a standing ovation of welcome as he was ushered to special seats reserved for him and his entourage. He delivered a lecture and prayed at the event. The lecture, which dwelled more on the reason for our existence and why it is necessary to live a fulfilled life and also touch lives of others positively so that we could be remembered for our good deeds when we are gone. According to him, all we see around us now is vanity upon vanity. We came with nothing and we will definitely return to God with nothing. So, it is necessary to positively touch lives.

The beautiful and colourful event had 2 Aso Ebi on display. Two different Ankara, were spotted by all the guests. The celebrator also wore one of the beautiful Ankara.

It was a brown flourish Ankara with a touch of pink and black.

Besides the two beautiful Ankara on display, some set of ladies who were members of the organising committee and celebrator’s family members were looking gorgeous in white beautiful lace. This set of ladies were on their feet till the end of the event to ensure that all guests were taken care of at the party.

Highly respected veteran actor-cum-film maker, Anta Laniyan, was one of the actors who got to the venue very early.

He was looking simple as ever in his purple native dress, and he sat quietly at the back seat with other guests.

Lots of people didn’t know he was at the event, if not for the MC who recognised his presence and also asked him to stand up for recognition.  He maintained his seat at the back until he left the party.

FATHIA BALOGUN LOOKS AGELESS AS EVER

Star actress, Fathia Balogun, is one actress Kemi Korede, who happens to be one of Fathia’s pet daughters in the industry.

Immediately, she stepped in, many female guests took a turn to take photography with her, while her younger colleagues all stood up to greet her and ushered her in into her reserved seat.

The celebrator’s younger sisters, Abosede, Omotolani and Moji junior had a special presentation for their elder sister as they took a turn to explain, what she means to them and how she has made an impact on their lives standing in as their father and mother. They used the opportunity to express their gratitude for all she had done and still doing.

They ended their speech with a presentation of artwork of the celebrator to mark her birthday.

Moji’s Aunty also made a special presentation to her immediately her younger ones were done with their gift presentation.

Popular Islamic musician, Aiki Mariam, sang a special song for the celebrator and her friends to usher them into the hall.

The group of friends who ushered the celebrator into the hall was led by the beautiful Folorunsho Adeola and the gorgeous Bukola Adeeyo.

The Islamic singer rendered some beautiful songs as the celebrator and her friends beautifully danced into the hall, and immediately she was ushered into the hall, she went round to greet all guests at the event.

MC OLUOMO AS THE GAME CHANGER

The newly elected chairman of NURTW Lagos Chapter, MC Oluomo, stormed the event with his entourage at the late hour of the day. Immediately he stepped into the hall, the mood of at the party changed. The party experienced another brighter phase and it was as if, a fresh phase of the party had started, everything came alive and bubbled.

He changed the entire mood of the party as all the stars went to greet him.

Islamic Asalatu was among guest artistes at the event.  He arrived early and also performed to entertain guests.  The event which was star-studded had lots of movie stars in attendance and lots of musicians who also took a turn to perform and entertain guests.

These two beautiful actresses were looking gorgeous in their Aso-Ebi designed by Zurry Fashion. They were up and doing at the event, assisted the celebrator Moji, who happens to be their close friend and colleagues, to have a successful party.

They both equally led the train that ushered the celebrator into the hall. One can’t be wrong if they were referred to as assistant celebrators at the party.

Popular music sensation, Busola Oke, was also one of the special guests at the party.

Immediately he entered the hall, guests could not help, but praised him. He could hardly sit, as many guests wanted to take a selfie with him.

Immediately, he stepped on the stage to perform, guests too were on their feet to dance to his evergreen songs.  He was, indeed, one of the best performers at the party.

MADAM SAJE AS MOTHER OF THE DAY

Veteran actress, Madam Saje, has always been a mother figure to lots of younger stars in the industry. She is always supporting them in whatever way she could lift them. That trait she also displayed at Moji’s event.

She was more or less like the mother of the day, going round to see that everything was well, taken care of, and also that the dignitaries were comfortable.

Many guests were surprised to see Kunle Afod at the event, as he has been on U.S. tour to premiere his latest movie, entitled: “Sokoto” in different states in the U.S.

He just didn’t come alone but came in with lots of members from his Legacy School of Performing art. They came in, in good numbers and had to get a good space that was enough for them, before settling down.

Kunle Aford was equally looking good in a brown-native attire.

Highly respected veteran actor Owolabi Ajasa was present at the 2-in-1 party. He came to represent the Abeokuta chapter of TAMPAN. Moji is a well-known actress, who is also loved by lots of her colleagues. Owolabi Ajasa came all the way from Abeokuta to show support and love to one of their own, and he was equally highly recognised and celebrated.

PASUMA IN ALL WHITE OUTFIT STEALS THE SHOW

Alhaji Alabi Pasuma was the main artiste for the Moji 2-in-1  party.

He stepped into the hall in the company of Dele Onifade and the Mcs could not help but kept singing his praises for long.

Pasuma was looking handsome as usual in an all-white outfit.

Beautiful actress Foluke Daramola, who though had an extremely busy day, still made way to honour Moji Adedeji. She was beautifully dressed in her Aso-Ebi and stepped into the event hall at the middle of the party.

Her style was simple, but you couldn’t help, but admire the simple style and beautiful accessories she adorned to compliment her looks.

KOKOZARIA COMES IN WITH ENTOURAGE

The celebrator’s cake was designed in dollars bills, white and gold. One can’t help but admire the well-designed cake, which was one of the side attractions at the party.

READ ALSO: HOW I GOT MY BREAKTHROUGH CAREER-WISE IN THE US – NIKE FATOKI-CAMPBELL TELLS CITY PEOPLE