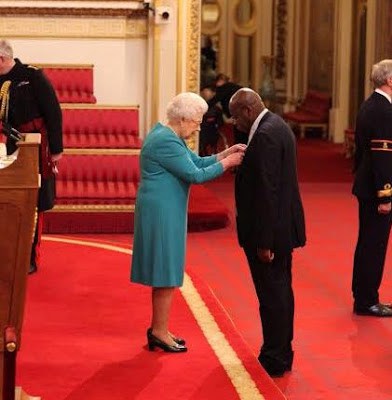 Chukwu-Emeka Chikezie received his MBE from Her Majesty The Queen in a ceremony at the Buckingham Palace on Friday, May 5th.

Chukwu-Emeka is the Executive Director and co-founder of the London-based African Foundation for Development (AFFORD), an organisation with a mission to expand and enhance the contribution that Africans in the Diaspora make to Africa’s development.

He is of dual Nigerian/Sierra Leonean origin with family ties extending to Equatorial Guinea. He has worked as a consultant for several international development donor agencies around engaging the Diaspora in the development and has commented widely on migration and development issues in the media and in public fora.
Chukwu-Emeka was educated at an early primary school in Cheltenham, the UK followed by later primary and secondary schools in Freetown. His first two years of university were at FBC, Freetown with the remainder at Gloucestershire College of Arts and Technology, Northeast London Polytechnic(now University of East London) the London College of Printing and Distributive Trades and City University.

His first job was ‘flipping burgers for MacDonald’s and working behind the bar at a seedy Cheltershire nightclub.

Queen Elizabeth presents MBE to Chukwu-Emeka Chikezie at Buckingham Palace was last modified: May 8th, 2017 by Arinze Ago