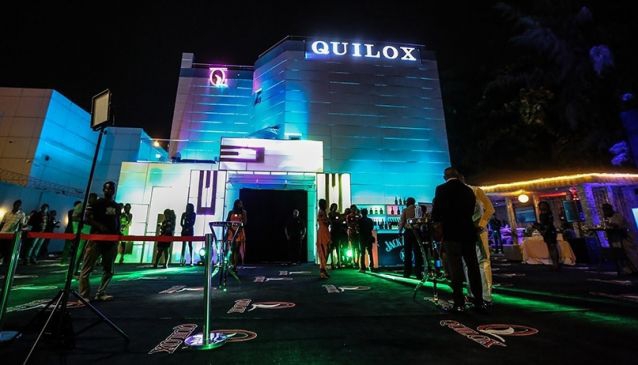 On the 20th  of December, Quilox Nightclub held its 4th anniversary aptly which was themed ‘Quilox 4000 Back To The Future’, an ode to the futuristic vision of setting up the first purpose-built world class nightclub in Nigeria 4 years ago.

The celebrations kicked off on the 18th of December with a novelty football match themed Play for life between Quilox and Hiptv. The match ended with team Quilox defeating Hiptv by 4 goals to 1 in a keenly contested game.

To continue the celebrations. Quilox hosted the biggest event on Nigeria’s nightlife calendar, on December 20th, it was a star-studded anniversary party, the event was supported by Hennessey and Red Bull. As expected the crème de la crème in society came out to support club Quilox, special guests included NFF president – Amaju Pinnick and his wife, LIRS Chairman- Ayodele Subair to name a few.

As customary with Quilox signature events, the outdoor area was transformed into a world-class concert venue and as usual, Quilox had performers to match the bill including Kaffy’s led dance group Imagneto, Aquila Soldiers; Base One, Beezy, Que Peller and Airboy who all thrilled with show-stopping performances.

Some of the celebrities who performed at the party include CDQ, Small Doctor, Kcee, Olu Maintain, AY Comedian, Ushbebe, and Reminisce while  Bovi and Jimmie were the official hosts.

The man of the moment Shina Peller then came up stage to cut the anniversary cake. While reflecting on the journey thus far, he specially thanked his customers, friends, well-wishers and media partners who have supported the brand over the years.

It is safe to say that year in year out the Quilox brand never fails when it comes to innovation and surpassing the expectations of her customers. Here’s to many more anniversaries and greater heights.

Wenger ‘not fearful’ of Arsenal losing Alexis in January