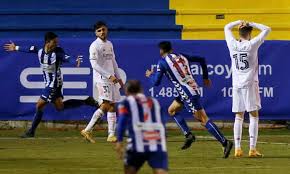 Coach Zinedine Zidane’s chances of winning a silver ware this season have now been reduced to the La Liga and the Champions League as Real Madrid have been knocked out of Copa de Rey after suffering a loss to a third division side, Alcoyano.

Madrid lost 2-1 in extra-time, with Alcoyano playing the last 10 minutes a man down after Ramon Lopez saw red.

Eder Militao scored his first Real Madrid goal on the stroke of half time in the ill-fated match. Ten minutes to the end of the game, Jose Solbes sent the match into extra time while Juanan got the winner in the 115th minute of the game to record one of the biggest upset in the Spanish Cup.

Casemiro and Lucas Vazquez were the regulars that started in Los Blancos line up but the likes of Karim Benzema, Eden Hazard, Toni Kroos and Marco Asensio were later brought on in the game.

While addressing the press conference, Zidane called for calm as he took responsibility for the loss. He said the players gave their all on the pitch.

“I’m the coach, the responsibility is mine. I’m responsible. We’ve played against a third division team and we should have won but it’s not a disgrace,” Zidane told the media after the game.

Real Madrid Crash Out Of Copa Del Rey To 3rd-Tier Side Alcoyano was last modified: January 21st, 2021 by Jamiu Abubakar