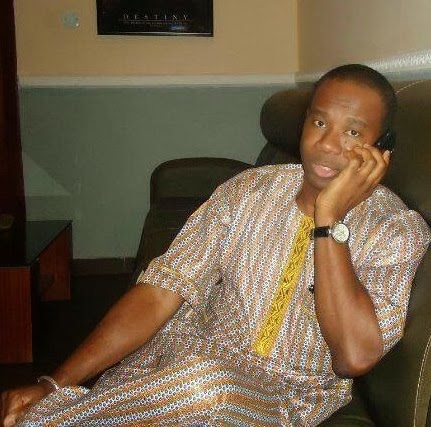 Prince Jide Fadairo is an Owu Prince. He is from the famous Fadairo royal family of Owu kingdom in Abeokuta.

Till he passed away on 17th November 1998, his dad, Chief Afolabi Fadairo, was a very popular Owu Chief and politician. 19 years after, the handsome prince who is married to a Princess recalls how great his dad was.

My father, the late high Chief Afolabi Fadairo, was the Aare Ago of Owu Kingdom Abeokuta. Prior to that, he was the Oganla Owu Abeokuta. He started his public life with the defunct Action Group under the leadership of late Sage Chief Obafemi Awolowo. His public life continued with the formation of Unity Party of Nigeria (UPN) under the same leadership of Pa Awolowo. In 1981, he was appointed the first Executive Chairman of Ewekoro local government by the late Ogun State  former  Governor the late Olabisi Onabanjo.

His public works and  dedication to community development continued after he left Ewekoro Local Government when he threw himself to the rebuilding of Owu community. My father was very instrumental to and played pivotal role in the unification of Owu indigenes  all over the Southwest and beyond, under the leadership of the late Balogun of Owu Kingdom, Chief OAB Akin-Olugbade.

For so many years, the stool of Owu Kingdom was vacant and it left the Palace in a dilapidated condition and clearly a division among sons and daughters of Owu.

At the end of the Second Republic in 1983, the Owu council of Chiefs reconvened under the leadership of the then Balogun Owu/Ekerin Egba the late Chief  Akin-Olugbade.

The first project was fund raising to rebuild the dilapidated Palace. After about a decade, the edifice was erected and Owu would finally have a King on the throne. Oba Odeleye reigned for 10 years before joining his ancestors, prior to Oba Odeleye ascending the throne, my father was the highest authority in the Owu Palace.

In 2005, HRM Oba Adegboyega Dosunmu ascended the throne of his forebearers as the Olowu of Owu Kingdom Abeokuta.

The Late Chief Afolabi Fadairo  was a true son of the soil and would NEVER support dragging Owu Kingdom to court by a member of his extended family. It is a desecration  on his life -long dedication and commitment to his people and the community. I believe that dragging Owu Kingdom to court has also stigmatised the entire Fadairo’s Descendants family and has destroyed the good name of my father. I personally oppose the case instituted by my cousin and I stood with the Owu Kingdom.

Upon assuming office Governor Ibikumle Amosun embarked on massive demolition exercise, which resulted in demolishing two of my family ancestral homes on Totoro road, Owu Abeokuta. The act was disappointing, but looking back in retrospect, drastic measures requires, drastic moves. The development beeing witnessed all over  Ogun State clearly indicates that the government has a clear road map of progression and developmental continuity in the socio-economic and infrastructural growth of the State. The State development government, under the visionary leadership of Governor Ibikumle Amosun has raised the State with a template of continuity. We can only experience and enjoy qualitative progress when a leader possess the spirit of true statesmanship and pragmatism.

Attended LA Primary School, Ikeja GRA in 1973, later attended Iganmode Grammar School Ota and concluded secondary school education in 1985. In 1988, graduated with B.Sc in Respiratory Healthcare from Concorde College, School of Respiratory care in Los Angeles California.   In 1991, sat for the State of California medical board examination and was licensed to practise as a Respiratory Care practitioner by State of California.

Later, he went on to obtain certificate from the United States National Board for Respiratory Care  (NBRC). In 1992 was granted member of staff of the prestigious Glendale Adventist Medical Center in Los Angeles California. In 1998, he left the hospital practice to set up a private Medical Transportation Company and a medical equipment company. In 2005, migrated back  to Nigeria and established Executive Coach Ltd, a transportation, leisure and hospitality company and later diversified into a formidable business development/management company.

In 2012, collaborated and partnered with Gran Imperio Group, a real estate and leisure consortium owned by the then Prince Adeyeye Ogunwusi, now the Ooni of Ife on the ground breaking of the world class INAGBE GRAND RESORT in Lagos. Currently, the Executive Secretary of House of Oduduwa Foundation, founded by His Imperial Majesty Ooni Adeyeye Enitan Ogunwusi Ojaja II. The Ooni of Ife.

I am a Christian and happily married to Princess Folashade Ogunwusi Fadairo with 5 children.

NASS May Bar GEJ from Contesting for 2019 Election