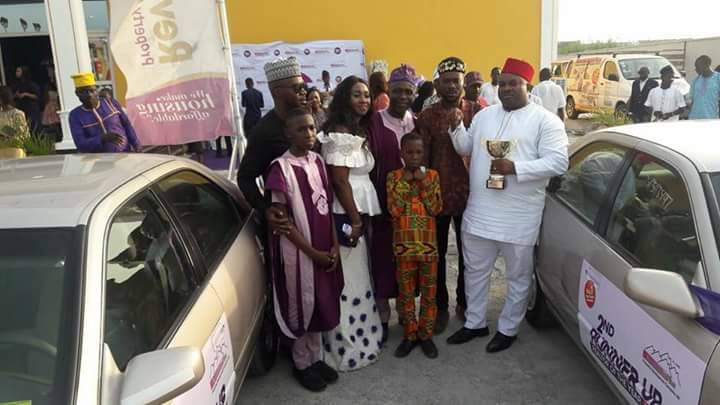 At Its End Of Year Party In LAGOS

The last 17th of December, 2017 at Grand Atrium Event Centre in Lekki, Lagos, was a day of celebration and jubilation, as one of the best performing real estate companies, RevolutionPlus Property Development Company Ltd., celebrated it’s end of the year party.

The event which was tagged “End Of The Year Thanksgiving and Realtor Appreciation Party”, was celebrated in church and later moved to a big hall; (Grand Atrium).

On the day, there was a thanksgiving service in the morning at Christ Embassy Lekki, Oando Filling Station, Chisco Roundabout, Lekki, Lagos and followed by the reception at the new Hall, Grand Atrium, beside World Oil Filling Station, Opposite House On The Rock Church, Lekki Epe Expressway, Lagos, both on the same day.

RevolutionPlus Property has become one of Nigeria’s Best Performing Real Estate Companies. Presently, it has products in Lagos, Abuja, Ogun State and Overseas. The company celebrated its 3rd year of existence few months back and recently, opened an head office at No 1, Olufunmilola Okikiolu, off Toyin Street, Ikeja, Lagos.

So, last weekend, the company celebrated an annual event for staff in Lekki.  The event officially kicked off with an opening prayer and followed by CEO’s welcome addresse. In his address, he thanked everyone present and also stated the importance of the event.

FIRST SET OF AWARDS WAS PRESENTED

Most punctual staff of the year at RevolutionPlus was Emmanuel Tony.

This award started with the person in the 8th position. Madam Oyinlola, she was honoured for her contribution to the success of RevolutionPlus and she was also part of staffers who toured Dubai, along with some others.

Abiola Taiwo was honoured in the top 10-6 MD’s award alongside Segun Fasanya, Mr. Tony, and a whole lot of others for their good performances and great dedication to work. 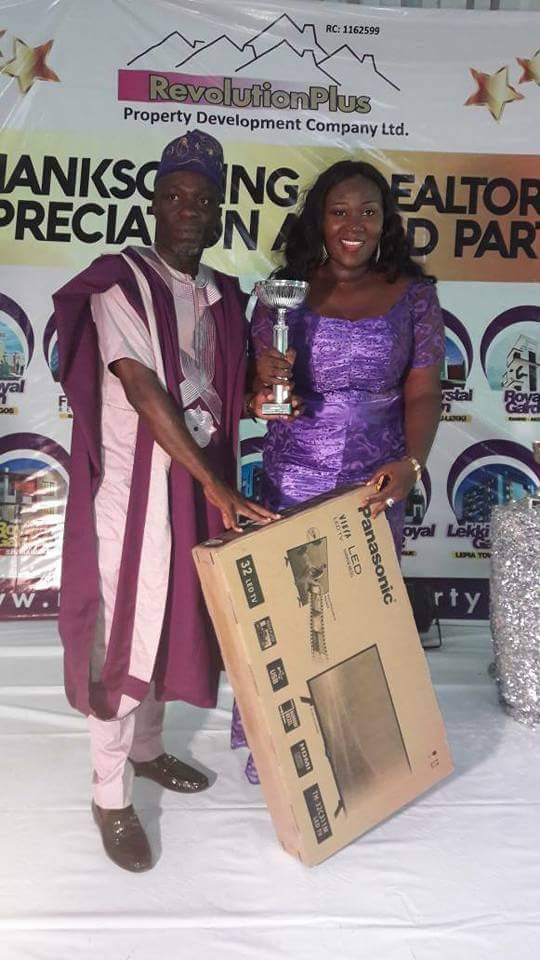 THE COMPANY’S DRIVER WAS REWARDED

In this category of awards the most committed and dedicated junior staff of the year was announced and Mr. Anthony Ugweje emerged as winner.

STAFF OF THE YEAR AWARD WENT TO…

In this category, Mr. Akinwale Ojo; the official driver was rewarded for his commitment and dedication to work. He was given a Toyota Sienna space bus. Mr. Akinwale joined the company a year ago but his contribution was noticed; he  would sometimes take clients to site for inspection and he markets the company in an unbelievable manner.

Omaedo Osamor, emerged first runner up; She won Toyota Camry as well and the winner of the contest was Nike Idowu. She won the best staff of the year award. The beautiful lady joined the company six months back but she has been able to play a vital role in the development of RevolutionPlus Property Company. The pretty lady revealed her happiness to City People that she was so happy for the car-gift “I am very happy. I am so grateful to God Almighty. I won this Toyota Car and a TV.  I joined the company about six months ago. I am very grateful to my MD and Executive Director because they really supported me in a way I didn’t even expect. I am so happy and God will continue to help them.” 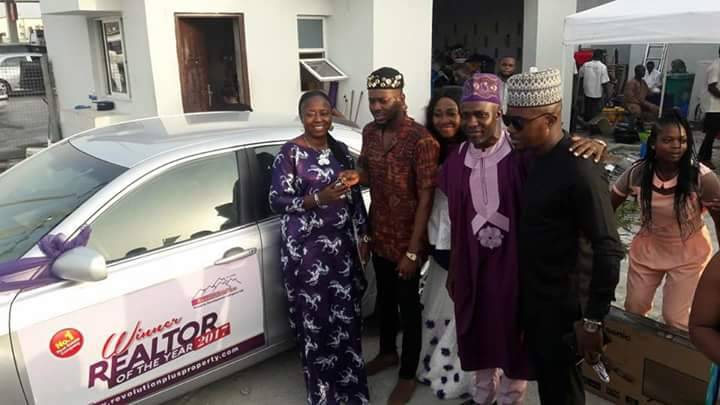 Mrs. Alozie Alaba, won the Realtor of the Year Award. She was in a joyous mood as friends, family celebrated with her. She said “I joined them February this year and through them I have been able to go Dubai and I have qualified for the Suncity trip as well; a trip to South-Africa and now, I won the Realtor of the Year, from which I got this Toyota Camry”. She also said the award was as a result of effort she has put in and it will keep her working even harder.

WHAT THE REVOLUTIONPLUS PROPERTY MD DISCLOSED ABOUT THE CAR GIFTS

City People asked the they MD the reason for the annual event. He said, though they started 2 years ago, “We did one last year and the year before but this year’s is the biggest. What we have achieved this year is massive”.

Why I gave out 5 cars? The reason is not far-fetched; it is just to motivate and encourage staff and Realtors because Realtors are the people selling for us. This is to encourage them to do more in the coming years. Some of them have worked and laboured so well.  And as for what we are planning to do next year, I could remember vividly last year, during this event, we were going to give out cars this year and we did. This is small from what we are planning for next year. Our plan for next year is to give out 10 cars. We gave out 5 this year and we would multiply it.

What is the highlight of the year? The highlight of the year is that, this year we have recorded a lot: we opened our new Head-Office called RevolutionPlus House in Ikeja, with multi-million naira. We started this year with 5 projects, now we have 15 projects. That is remarkable for us. We have two projects in Abuja. We have also started another one in Simawa. We have about 6-7 in Ibeju-Lekki. We are expanding every day. We have offices around the country; one of them is an office we just opened in Dallas, USA because the concept is to move closer to our people in the diaspora.

MORE THAN 30 FLAT TV SCREENS OF PANASONIC WERE WON

A lot of gifts were given out; part of them is Panasonic Television sets and Tablets, while some went home with Refrigerators.

The Many Lessons Life Has Taught Me @ 50

6 Benefits Of Having Genuine Title Documents...

How CMB Plays Big In The Real...