Road To Ethlagos #power2020: Ethereum Meetup In Lagos Sold Out 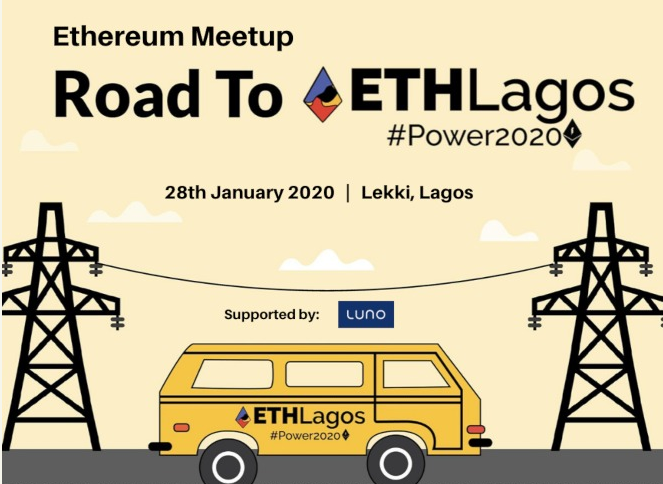 In the build-up to the forthcoming EthLagos 2020, the Ethereum Meet up, which is billed to hold on Tuesday, January 28, 2020  at the Venia Business Hub Lekki, Lagos is SOLD OUT

This is proof that technology is changing Africa and the world really fast. And concerned workers have already embraced the fact that work, jobs, and careers as we know them now are changing drastically.

Skills, jobs, and careers are fast becoming obsolete at an alarming rate. And one way or the other, everyone is caught in this trap.

Speaking to newsmen, Uri Ngozichukwuka, the Communication Director of the event expresses her shock at the massive sign-up that greeted the Meetup which was planned for no more than 100 participants, but got multiple responses and interest.

“We are surprised at the response of tech community; BLOCKCHAIN/developers/ software architect/ trainers/ partners sponsor all eager and ready for the upcoming ETH Lagos and BLOCKCHAIN week”, she told newsmen.

Uri added that the MeetUp shall feature tech experts and facilitators who have cut their teeth on digital and tech world.

Benjamin Onuoha, founder Africa BLOCKCHAIN Alliance, is one of the key organisers and the main speaker, and he will be accompanied by other blockchain professionals, who will also be speaking about the general hackathon rules for ETHLagos, applications and some introductory concepts on blockchain, ethereum and energy. Other speakers are:

A representative from IEEE.

Bukkie Williams, a foremost software architect who is crafting the youthful generation into a digital army will be there and Module Oni, a notable advocate for child tech education will also be on ground with many more top-notch facilitators”

“In line with the changing digital clime, ETHLagos is a kind of hackathon focused on decentralized energy solutions. At this Meetup, renown speakers will be discussing blockchain applications in the energy sector as well as the opportunities for developers and non-developers for ETHLagos”, Uri added.

Selected participants for The Meetup will be learning more about Africa’s first hackathon on sustainable development.

The event will also enlighten students, workers, and tech-compliant operators, about the opportunities that abound in maximizing the use of the digital Technologies to their career advantage.

An important part of the ETHLagos hackathon is that it’s not just a hackathon but an educational event with week-long workshops, training and activities to get participants up to speed on blockchain and the energy sector. We also plan to incubate and accelerate winning projects so they can remain sustainable in the long run.