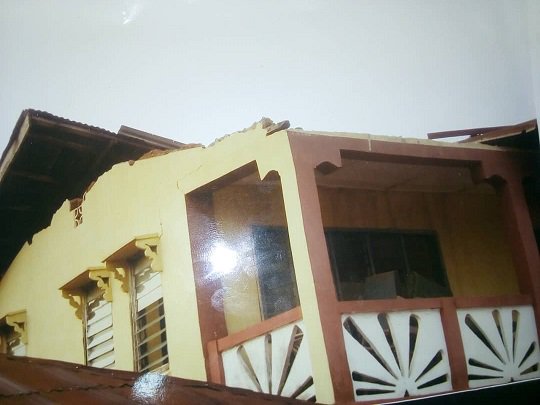 The palace of Alare of Are-Ekiti in Irepodun/Ifelodun Local Government Area of the State has been blown off following a heavy rainstorm that left property worth millions destroyed.

The rainstorm, which began around 5:30 pm and lasted for about two hours during the weekend, was preceded by a whirlwind.

No fewer than 30 houses were blown off but there was no report of casualty in the affected areas.

Among the properties destroyed was the palace of the traditional ruler.

The rain has left many residents homeless, with many of them struggling to find friends and families to accommodate them.

Speaking with journalists in his palace on Wednesday, Alare of Are-Ekiti Oba Boluade Adebiyi lamented his palace and more than 30 other buildings were affected by the heavy rainstorm that has rendered many homeless.

Oba Adebiyi cried out to state and the federal governments to come to the aid of his community, saying the degree of damage done was beyond their individual capabilities.

“As you can see, part of the palace roof has been blown off but that is not my immediate problem now.

“My concern now is how to take of my people that have become homeless by this natural disaster.”

One of the victims, Mr Ayodele Anisulowo of number 18, Odo ode Street, whose house was affected while speaking with The Nation described the incident as terrific.

He disclosed that all that he had painstakingly worked for, for many years have gone down the drain.

“My properties have been blown off with water entering into my room. Everything is soaked and many have been destroyed.

“This is a serious thing I don’t know what to do because I am now hopeless and homeless,” he said.

An octogenarian widow, Madam Jibiye Adeleye, lamented she has been forced to relocate to her father’s house pending the time her children can repair their father’s house.

“I thank God that I am a native of Are Ekiti, I have a place to keep my head for now. But it is not convenient at all.

“l have been married for almost sixty years and since I left for my husband’s house, I have not slept a night here in my father’s house,” she stated.

Oba Adebiyi, who said he has contacted relevant state and federal authorities to come to the aid of the community, also appealed to the indigenes of Are Ekiti in the diaspora to come home and help their people at home.

The General Manager of Ekiti State Emergency Management Agency, Mr Buruji Olajide, however, told journalists that Are Ekiti was not the only community affected by the rainstorm.

According to him, Ado Ekiti, the state capital and some other communities in like, Afao and Igbemo were equally affected.

Other towns, he mentioned, included Isan Ekiti and Iludun in Oye Local Government were also hit by the heavy rainstorm.

He said: “We and NEMA have jointly visited some of the affected areas for on the spot assessment of the damages. More than 30 houses were destroyed in each of Isan and Iludun.

“About 40 roof houses were blown off in Afao, more than 45 five houses were affected in Are Ekiti.

“Among the properties destroyed in Afao, was the newly completed Gifted Academic in Afao Ekiti.

“We have visited some of the affected communities to assess the level damages.

“We have been able to establish that more than 70 houses were affected, we thank God that no casualty was recorded but we are still compiling our report when it is ready, we shall state the total number of the victims,” he said.