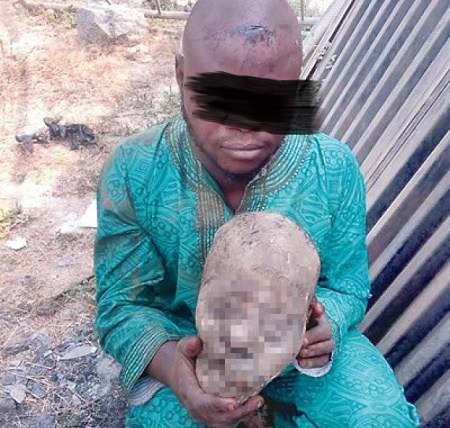 A man suspected to be a ritualist, has been nabbed red-handed with some human body parts hidden inside bags of garri.

Felix Nnalu Chiabogwu, a 45-year old man, who is suspected to be a ritualist and member of a kidnapping gang, has been arrested by the Police in Delta State.
According to SaharaReporters, he was arrested on Sunday in Abavo with human body parts kept in kegs in which he poured a preservative fluid. The kegs were then concealed in two bags of garri.
Mr. Andrew Aniamaka, Delta State Police Command Public Relations Officer, said Chiabogwu was arrested at about 10:30 am on Sunday.
He described the suspect as a member of a syndicate operating in Amai, adding that the ritualist was arrested while attempting to flee to Lagos.
“The arrest is connected to the investigation of cases of missing persons in the intractable land disputes between Umuebu/Amai/Eziokpo /Obiaruku communities in Ukwuani area. In his possession, we found, concealed in two bags of garri, two four-litre jerry cans stocked with substances suspected to be human parts in a preservative fluid. The investigation is ongoing to unravel other members of the syndicate,” Aniamaka said.
Shock as Man is Caught Red Handed With Human Body Parts Hidden Inside 2 Bags of Garri was last modified: June 7th, 2017 by Arinze Ago

Rare Pictures of the The Nigerian Civil...

Woman Publicly Murders Her Own Boyfriend for...