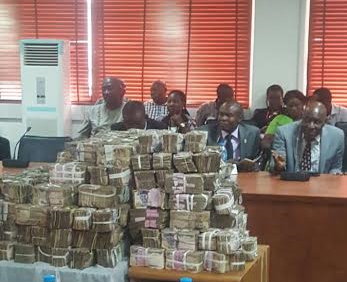 A report has shown that the controversial haul of cash recovered by the Economic and Financial Crimes Commission (EFCC) from a residential apartment at Osborne Towers, Ikoyi, Lagos, is part of the N57.2 billion released to the National Intelligence Agency (NIA) by the Nigerian government 2015.
The funds were approved by the office of the National Security Adviser (NSA) and disbursed in cash by the Central Bank of Nigeria (CBN).
The then NSA, Sambo Dasuki, had claimed he was approving the funds for “special services” he mandated the NIA to undertake.
What those “special services” were remained unclear.
Following the announcement of the recovery by operatives of the anti-graft agency, the NIA authorities, according to presidency sources, told President Muhammadu Buhari that former President Goodluck Jonathan approved the fund for some “crucial and covert security projects.”
The huge cash, which included $43,449,947, £27,800 and N23,218,000, were recovered from Apartment 7B following a tip-off to the EFCC by an unnamed whistleblower.
Presidency sources believe the cash, which translates to about N13 billion (based on the prevailing official exchange rate by the CBN), is the balance of the N57.2billion released to the NIA for the controversial “special services.”
This newspaper had in an exclusive report after the 2015 presidential elections exposed how the CBN paid out N67.2billion cash – $289,202,382 (N57.2 billion) to the NIA and the rest to the office of the NSA.
That report provided extensive details of how bullion vans were used by government officials to cart away the cash to unknown destinations.
The details can now prove useful to the three-man presidential committee, headed by Vice President Yemi Osinbajo, mandated to investigate how the NIA came about the funds, and whether or not there was a breach of the law or security procedure in obtaining custody and use of the funds.
The committee, which commenced its assignment on Wednesday, also has the current NSA, Babagana Monguno, and the Attorney-General of the Federation, Abubakar Malami, as members.
According to the report, published on September 19, 2015, funds, totaling at least N67.2 billion, were released through two cash withdrawals from the CBN between November 2014 and February 2015.
The first of the withdrawals was made through a memo that originated from the office of former NSA, Mr. Dasuki.
In the memo, with reference number NSA/366/S, dated November 2014, and entitled: “Request for Funds for Special Services,” Mr. Dasuki’s office called the attention of CBN Governor, Godwin Emefiele, to a previous discussion on a request to withdraw $47 million cash, out of a certain N10 billion earmarked for an unbudgeted “special services”.
“Further to our discussion, you are pleased requested to provide the sum of forty seven million United States Dollars (USD47, 000,000.00) cash out of the Ten Billion Naira (N10, 000,000,000.00) and the balance in Euro to this office for special services.
“Mr. S. A. Salisu, director finance and administration is, hereby authorised to sign and collect the amount. Please accept, Your Excellency, the assurances of my highest esteem,” the memo read.
The second withdrawal was based on a memo dated February 25, 2015 generated by the National Petroleum Investment Management Services (NAPIMS), the investment management services arm of the Nigerian National Petroleum Corporation, NNPC.
The memo conveyed an instruction to the director, banking and payment system department of the CBN “to urgently pay in cash the sum of $289,202,382 (N57.2 billion) to the National Intelligence Agency, NIA.”
“Upon receipt of this mandate, please pay urgently the under-listed beneficiary the cash amount indicated. Please debit CBN/JVCC Foreign Account No. 000000011658360 with the JP Morgan Chase, New York… and advise as soon as the payment is made.”
The payment instruction in favour of the NIA was signed by one Okonkwo Godwin, General Manager, Finance, NAPIMS, with staff No. 18526.
The CBN spokesperson, Isaac Okorafor, had on Sunday denied knowledge of how the funds were released to the secret service agency.
But sources at the presidency told PREMIUM TIMES that NIA authorities had already explained to President Buhari that they received the funds in cash from the nation’s apex bank.

Alert: Many fraudulent activities in the capital market- EFCC