Home News Are You Smart Enough To Figure Out How To Move One Match To Make A Square? [WATCH]
News

Are You Smart Enough To Figure Out How To Move One Match To Make A Square? [WATCH] 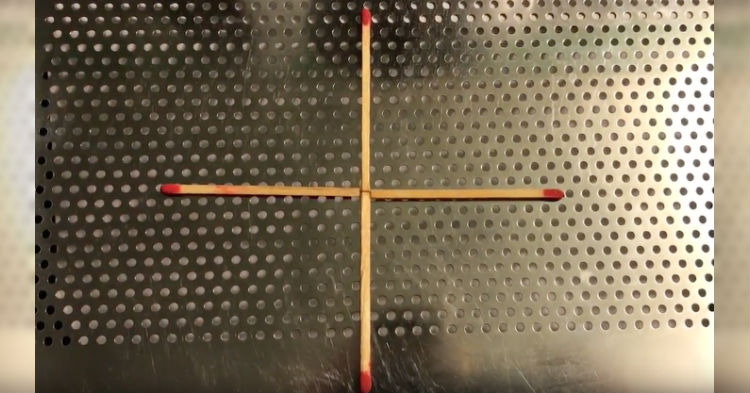 Some people love to stump their pals and they are usually the ones in the group who are always presenting brainteasers and puzzles on group emails. These are the people who like to have a little fun and keep their friends on their toes.

The latest brainteaser that is circulating the internet has people stumped. The photo shows four matchsticks in the form of a cross and the puzzle asks if you can make a square by moving only one match. Evidently, nine out of ten adults are stumped by this puzzle and can’t seem to figure it out.

The puzzle is an easy thing to bring out at a gathering, as all you need is four matches.

Start out by arranging the four matches so they are in the shape of a cross. Then tell your curious friends that they are only allowed to move one of the matches in order to make a square. As the presenter of the puzzle, the best part is watching the wheels spin in your friends’ heads. Give them a few minutes to try and think of a solution. They will most likely end up frustrated and begging you for the answer.

You may find that your friends get a little mad at you when you reveal the answer, as it’s so simple that they will be upset from getting stumped.

Next, tell your pals to pull out the top matchstick slightly. You can show them this or let them reveal the secret themselves.

Soon, they will see what happens when you tug at the matchstick…

And in the middle of all the matchsticks is a tiny little square. Talk about a simple solution!

Oftentimes, adults try too hard to solve a problem and instead of thinking of simple solutions they jump to conclusions and assume that the answer can only be found by making major changes. And then they realize that the answer is right in front of them. This can be true for so many situations in life. We are so used to being in a battle with everything in our lives, that we skip over the simplest things. The same is true for taking the time to really get aquainted with the smaller things in life and live in the moment. Children are so happy because they are innocent and are still amazed by little things such as their own shadow following them around or catching a glimpse of a rainbow in the sky. Life can be very simple if you take the time to use all your senses to engage in the present moment and free yourself from the bigger picture and the unknown future.

Some of the commenters who tried out the trick, came to other conclusions…

“Move the right match to the left to make the number 4 (a square).”

“Way too easy. Give us something really challenging.”

If you want a closer glimpse of how this trick works, you can view the video below.

Are You Smart Enough To Figure Out How To Move One Match To Make A Square? [WATCH] was last modified: May 25th, 2017 by Reporter