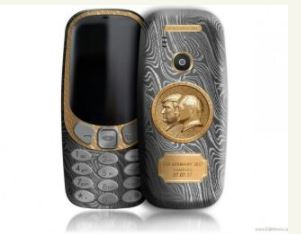 Caviar is a Russian company, and an expert at manufacturing special edition phones adorned with the portrait of Russian President.
They are the makers of the classic Nokia 3310, but this around it’s having both president of USA, Donald Trump and president of Russia, Vladimir Putin together on the Nokia 3310.
The gold plated portraits of the presidents are at the back of the Nokia 3310 phone. There’s also an emblem of the G20 summit below the portraits. The device is coated with hardened titanium with a pattern of Damascus steel.
This collector’s 3310 ships in a special black velvet box. However, you have to spend a whopping $2,466 (roughly #776,790 naira) to get that box containing the Nokia 3310 which is even more expensive than iPhone 7.
This Special Nokia 3310 Costs Almost N1 Million was last modified: July 14th, 2017 by Arinze Ago

Popular Actor, Yul Edochie Running In the Next Governorship Election of Anambra State?