Spurs ready to take the fight to Chelsea – Pochettino 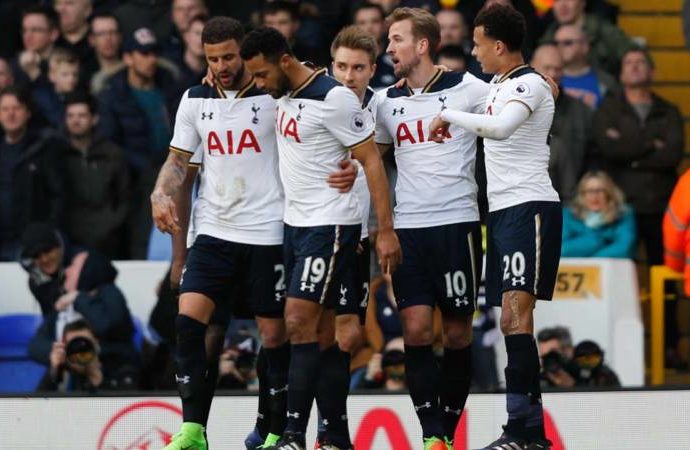 Mauricio Pochettino claimed Tottenham’s gritty 1-0 win at Crystal Palace showed they were ready to pounce if Chelsea stumble in the title race.

Pochettino’s side closed the gap on leaders Chelsea to four points with five games left after Christian Eriksen’s late strike clinched a victory that looked unlikely for long periods at Selhurst Park on Wednesday.

Well below their best as they struggled to shake off the frustration of last weekend’s FA Cup semi-final loss to Chelsea, it seemed Tottenham were about to squander a chance to keep pace with Chelsea before finally recovering their composure.

It was exactly the kind of pressure-packed situation that was Tottenham’s downfall last season when they allowed Leicester to wrap up the title after briefly threatening to overhaul them.

But Pochettino is convinced the way his team saw off a formidable Palace outfit bodes well for their chances of being crowned champions for the first time since 1961.

“We showed great character and personality after a very disappointing weekend,” Pochettino said.

“It was important to show we are focused and try to fight.

“We are showing we learnt a lot from last season. That is so important.

“We were fantastic last season and it was a big challenge to improve again.

“A big part of that was the mental attitude, we improved that a lot.

“We are showing we are ready to fight.”

Tottenham’s eighth successive league win was the perfect response after Chelsea had opened up a seven-point lead with a victory against Southampton 24 hours earlier.

Keen to keep his players from getting ahead of themselves, Pochettino has told them to forget what Chelsea do and focus on their own performances.

“When we are playing we are not thinking about what happened with Chelsea or what will happen in the future,” he said.

“We closed the gap again. It’s not important to send a message to Chelsea.

“The most important is the victory builds confidence, that’s the only way to catch them.”

Tottenham will be guaranteed to finish above Arsenal for the first time in 22 years if they beat their bitter rivals on Sunday.

That will be a sweet moment for Tottenham fans after so long in Arsenal’s shadow.

Pochettino isn’t concerned with the squabble for local bragging rights because he has his sights set on the far more significant target of bringing the title to White Hart Lane.

The Argentine knows emotions run high when it comes to the derby, especially in what may well be the last north London clash at White Hart Lane before the stadium is rebuilt.

Asked if the chance to ensure supremacy over Arsenal might fire up his players too much, Pochettino called for calm.

“It’s Arsenal, we know what that game means, but we are not thinking of being above them, we want to think of bigger things than that,” he said.

“It maybe the last derby at White Hart Lane, but now is important to be calm.

“We want to close the gap on Chelsea again. We want to win big trophies achieve big things, the mentality must be thinking bigger.

“We can speak about finishing above Arsenal at the end of the season.”

Palace are virtually safe despite the defeat, but Mamadou Sakho, on loan from Liverpool, faces an anxious wait to see if his season is over after he was carried off with a serious-looking knee injury.

“It’s a ligament, which one we don’t know. I certainly hope it’s not a cruciate,” Palace boss Sam Allardyce said.

“It looks like a hyper-extension. We’ll have to wait until he has a scan.”

Spurs ready to take the fight to Chelsea – Pochettino was last modified: April 27th, 2017 by Arinze Ago