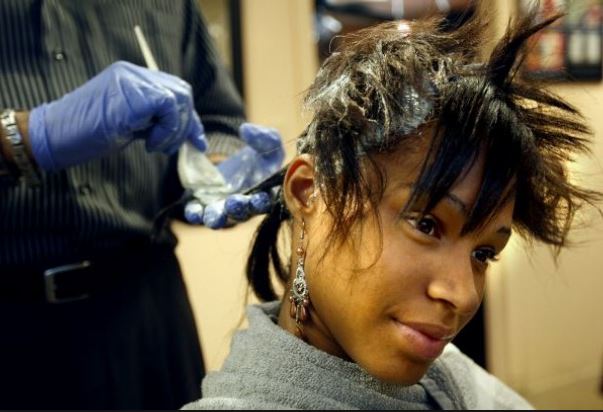 Common salon hair treatments involving Hair dye and chemical relaxers can drastically increase the risk of breast cancer.
These are the findings of a new study conducted by researchers at the Rutgers School of Public Health and Rutgers Cancer Institute of New Jersey.
The researchers found there was an alarming increase in the risk of developing the disease when certain women used dark hair dye and chemical relaxers.
Hair colouring, or hair dyeing, is the practice of changing the hair colour and the main reasons for this are cosmetic: to cover gray or white hair, to change to a colour regarded as more fashionable or desirable, and to restore the original hair color after it has been discoloured by hairdressing processes or sun bleaching.
Possible Side Effects Of Hair Dye You Must Know About
On its part, a relaxer is a type of lotion or cream generally used by people with tight curls or very curly hair which makes hair easier to straighten by chemically “relaxing” the natural curls. The active agent is usually a strong alkali, although some formulations are based on ammonium thioglycolate instead.
According to the researchers, black women who dyed their hair had a 51 percent increase in risk and white women who used relaxers had a 74 percent increase in risk.
Previous research has suggested there was a link between harsh hair treatments and breast cancer, but most studies don’t include black women.
The researchers suggested that toxic chemicals in the products can harm the body and are using these findings to further investigate the danger of using chemical products on the body.
Experts asked more than 4,000 black and white women in the New Jersey and New York area their habits of dying, relaxing or using deep conditioning creams.
Researchers then examined the study participants’ medical history to see if these products elevated the risk of breast cancer. Black women who used dark hair dye had an overall 51 percent greater risk of cancer.
They also had a 72 percent increased risk of developing estrogen receptor-positive breast cancer, which is the most common type of the disease.
Study Links Hair Dye, Relaxers to Breast Cancer was last modified: June 23rd, 2017 by Arinze Ago