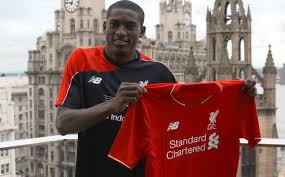 Awoniyi joined Liverpool in August 2015 after his exploits with the Nigeria U-20 team (Flying Eagles) in New Zealand.

The 20-year-old forward had a successful spell at Belgium first division side Royal Excel Mouscron where he scored 10 goals and contributed 4 assists.

Speaking to the official Liverpool website, Awoniyi revealed his excitement to have penned a new deal at Melwood.

He said, “I feel excited and I feel very happy.

“It has been three years since I first came to Liverpool. So far, so good. The last year was the best for me, it has been an amazing year so far.

“I just have to keep working hard each year and I believe one day the dream will come true.”

The young Awoniyi also thanked his family for the achievement and stated his ambition to play for the senior national team of Nigeria a having missed out of the 2018 FIFA World Cup.

Awoniyi has signed a long term contract with Liverpool (Liverpool)

He said, “Thanks to my family, who have been so supportive. I’m very glad and excited about this contract and hopefully to have an even better year.”

“That is a big part of the ambition for me.

“I have played for many years with the youth teams and I look forward to hopefully getting a chance with the senior team.”

The youngster completed his initial move to the Premier League giants Imperial Soccer Academy of Nigeria.

He was loaned out to German Bundesliga side FSV Frankfurt for three seasons and later to the Netherlands with NEC Nijmegen before his last loan move to Royal Excel Mouscron.