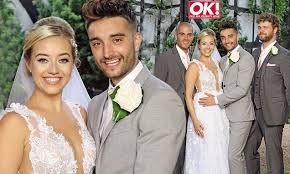 Tom Parker has married Kelsey Hardwick, in a lavish ceremony. The Wanted singer and the actress were surrounded by their family and friends as they tied the knot on 14 July, on a farm in Surrey. And, discussing their romance, the Legacy actress admitted she wanted to marry the 29-year-old from the very moment she laid eyes on him. ‘It was literally love at first sight. I saw him outside a nightclub in London and I grabbed my friend and said: “Oh my God, I love him”,’ she explained.

The pair have been together for nearly a decade and got engaged back in 2016, with the Glad You Came singer admitting his proposal took three months of planning. However, while Tom was joined by some of his former bandmates for his big day, it seems not all of them accepted his invitation. Speaking to OK! Magazine, the groom revealed he asked Max George, Jay McGuinness, Siva Kaneswaran and Nathan Sykes to be ushers at the ceremony – but not all were keen. ‘It’s weird, I emailed all the boys a few months ago and asked them to be ushers. As we’ve not all been together since 2014, I thought my wedding might have been a nice moment for it,’ he explained. ‘Siva and Nathan said they’d like to but they didn’t know what they were doing at that time.

Then it got closer and I needed their suit sizes. Siva said no and Nathan didn’t reply. It is what it is.’ Read the full interview in this week’s OK! Magazine (Picture: OK! Magazine) But The Jump star isn’t holding the snub against Siva and Nathan, and admitted he would love to reunite with everyone in the studio at some point soon, to celebrate their 10-year anniversary.

The band were formed back in 2009, releasing their debut album The Wanted a year later.