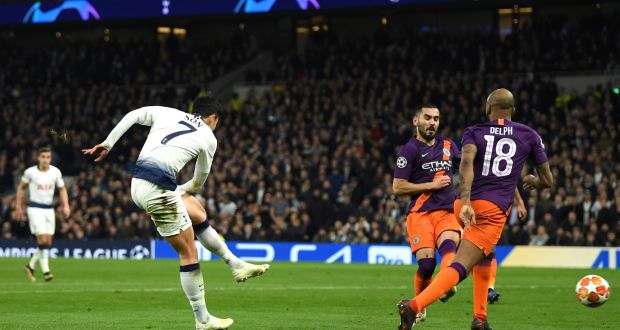 In a searing atmosphere in their vast new stadium, Spurs overcame the loss of Harry Kane to a serious looking ankle injury – sustained when he challenged Fabian Delph in the second half.

And they made the breakthrough with 12 minutes left as Son twisted and turned on the byeline before shooting low past Ederson.

Spurs had survived the concession of an early penalty, awarded on a pitchside video review by the referee after Danny Rose was judged to have handled Raheem Sterling’s shot. Sergio Aguero stepped up, but keeper Hugo Lloris saved.

Manchester City were never at their best and must now overturn this narrow deficit at Etihad Stadium on 17 April to keep alive their hopes of a historic quadruple of Champions League, Premier League, FA Cup and League Cup.

This was the sort of night Spurs’ new stadium was built for – and how Mauricio Pochettino’s side delivered in front of their exultant supporters.

Spurs rode out Aguero’s penalty miss and another Kane injury setback to knock an off-colour Manchester City out of their usual stride. No-one can dispute that this was a first-leg advantage the home team totally merited.

The much-maligned Lloris, understandably criticised after his late error at Liverpool recently, was a hero here but Spurs had them all over the pitch.

Harry Winks gave a performance of real maturity in midfield and when Kane went off it was the talismanic figure of Son who again showed his liking for his new surroundings with the winner – after scoring the first Premier League goal here against Crystal Palace.

The South Korean is the ideal modern attacker: tireless, unselfish but with an eye for goal and a willingness to take responsibility, which he did here as he led the charge after Kane’s departure, culminating in the turn back from the byeline and shot underneath Ederson to give Spurs a precious lead to protect at Etihad Stadium.

Spurs look certain to have to overcome the absence of Kane in the second leg but a lead – and of great significance, a clean sheet – will see them travel north with justified optimism.