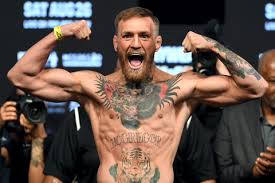 His opponent, Khabib Nurmagomedov, received a nine-month suspension and has been fined $500,000 (£380,950). Russian Nurmagomedov began a brawl by the octagon after beating McGregor, before the Irishman was involved in a bust-up with his opponent’s team.

Both suspensions have been backdated to the date of the Las Vegas fight.  However, Nurmagomedov’s suspension could be reduced to six months if he participates in an anti-bullying campaign in Nevada.

If it is, it is not expected he will return to action until after 5 June because the practising Muslim will honour Ramadan. Two of Nurmagomedov’s team have also been handed suspensions by the Nevada Athletic Commission (NAC).

Both Abubakar Nurmagomedov and Zubaira Tukhugov have been banned for one year and fined $25,000 (£19,030). Seconds after landing a fourth-round submission, Khabib Nurmagomedov vaulted the cage and headed towards McGregor’s team, prompting a melee.  Meanwhile, McGregor was involved in a bust-up in the octagon with members of Nurmagomedov’s team.