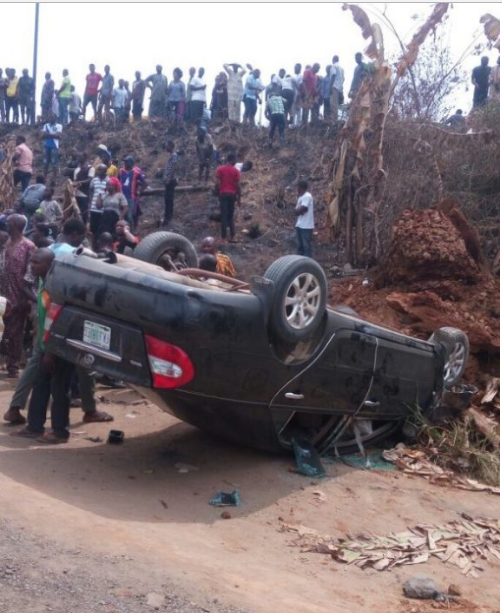 A yet-to-be-identified girl is said to have been killed in a fatal accident that occurred at the Ahiaeke axis of Umuahia-Ikot Ekpene Expressway.

Sources in the area told our reporter that the incident happened opposite the Light of the Word Restoration Ministry, Ahiaeke in Umuahia North Local Government Area of the state.

The girl was said to have died at the scene of the incident after she was hit by the Hummer Bus.

Unconfirmed reports have it that the deceased is until her death, an apprentice in the area.

Goods worth several amounts of cash was said to have been damaged as the car also rammed into some of the roadside shops, damaging goods of some of the shop owners.

Sources in the area told our reporter that the driver of the commercial car heading into the capital city was said to have lost control as a result of brake failure.

Some of the residents told our reporter that they later discovered that the driver of the commercial bus whom they accused of driving Under Influence (UI) was coming back from a chartered trip.

The vehicle and the driver was said to have been taken to the Umuahia Central Police Station (CPS).

The residents who decried the attitude of commercial and private drivers on the road called on the federal and state government to ensure the expansion of the express road, stressing that the narrowness of the road accounts for several accidents witnessed on the federal road.

Efforts to speak with the CPS Divisional Police Officer, until the time of this report, weren’t successful.

Ambode Will Be Probed Over Purchase Of 820 Buses – Court