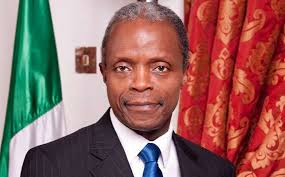 It does not matter what your perception of the fight against corruption fight is, the government has given itself a pass mark.

Vice President Yemi Osinbajo in an interview with some journalists in Lagos on Friday boasted that Nigeria has tamed what he called grand corruption.

Osinbajo’s remarks was in connection with the drop recorded by Nigeria in the recent Transparency International’s Corruption Perception Index.

The Vice President explained away the drop in the ranking, maintaining that his government has done a good a job with the fight against corruption

“I think the important thing to bear in mind about Nigeria’s anti-corruption fight is that the government has done what it ought to do by focusing on grand corruption.

“That’s the kind of impunity. And of course, you are also familiar with the scam that went on in the NNPC at the time; the so called statutory contracts, that’s grand corruption. That is the corruption that crippled the economy of the country,” Osinbajo said.