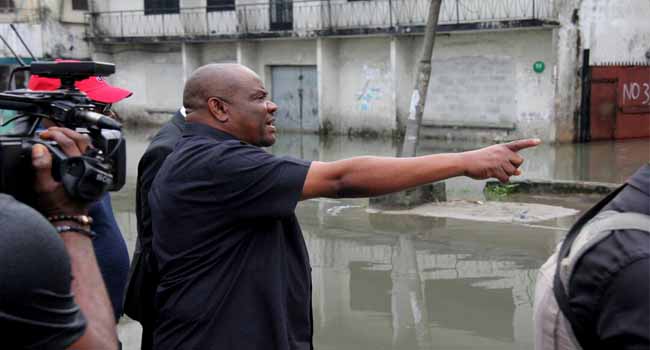 The Rivers State Governor, Nyesom Ezenwo Wike, on Sunday evening assured residents of Port Harcourt and other flooded communities that his administration will tackle its environmental challenges headlong.

The governor who inspected some flooded areas with engineers from Julius Berger and officials of the state Ministry of Works directed all relevant agencies to take immediate remedial measures.

Furthermore, he directed the continuous de-silting of all major canals in the town.

Meanwhile, Wike also advised residents of Port Harcourt to stop dumping refuse in water channels. According to him, such actions lead to blockage of the water ways, which subsequently leads to the flooding.

The governor, however, stressed that he will take some tough steps to ensure that the state will not experience such devastating situations in the future.

The Liaison Manager of Julius Berger Plc, Sam Ngbor, also assured the governor that the company will work with the state government to resolve the challenges as soon as possible.

Rivers State is one of the several states affected by the heavy downpour being experienced across the nation in recent times.

One of the worst hit was the Lekki area of Lagos State, which saw many resident trapped indoors for days. Cars, as well as household items were being submerged in the water.

In another development, about 10 residents were feared dead as the flood took over Suleja in Niger State following a heavy downpour.

Eye witnesses said that some who had attempted to leave their submerged homes for safety were swept away by the flood.

We’ll do everything possible to end flooding in Rivers – Wike was last modified: July 24th, 2017 by Arinze Ago