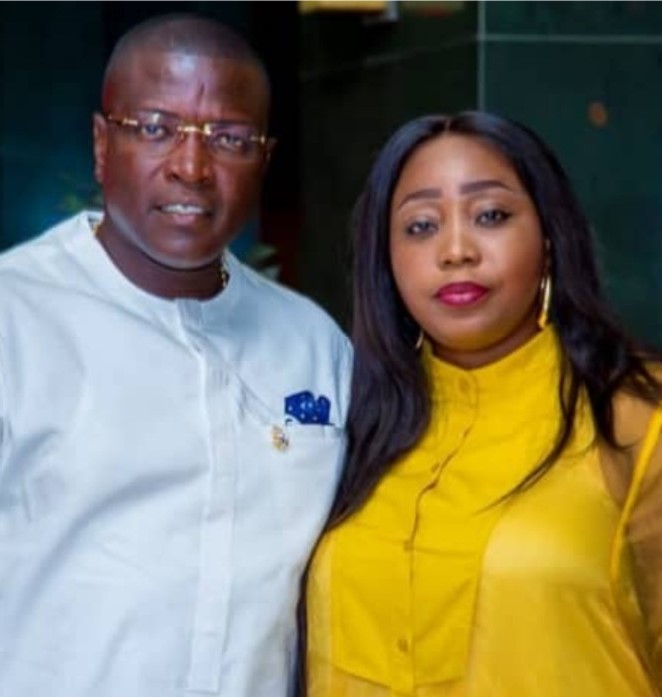 This is the story of a beautiful couple, Kennedy & Ichechi Okonkwo. Both play big in real estate. Dr. Kennedy Okonkwo, the popular Lagos real estate titan and his pretty wife, Ichechi have a lot in common. They are both ideas-driven. Both are also very stylish. They are fashionable and trendy.

Lets quickly tell you more about Kennedy, who some call Ned. He has been in real estate for solid 18 years. He transited from being an estate agent to a developer. He is the Founder/Group CEO of NedcomOaks Group, a real estate conglomerate. He is also the Chairman of Victoria Crest Homes.

Right now, he is the biggest real estate player in the whole of Lekki axis and he has 5 brand new estates under construction and all are going, to be ready for sale before December. But he has been very quiet about his accomplishments. He is humble by nature. He doesn’t brag. He doesn’t blow his trumpet.

His beautiful wife, Ichechi Okonkwo, a former banker with GTBank is also into Real Estate. She is the CEO of Victoria Crest Homes. She is also the CEO of Laundry King, a leading laundry & dry cleaning company with headquarters in Lekki, Lagos.

Kennedy was the first to go into Real Estate before his wife followed. He incorporated his parent company, Nedcom Oaks in September 2007, but he had been into that business before them.

NedcomOaks was coined from Kennedy’s name. Ned is from Kennedy, then the Co, is the shortened word for company. And the oaks is from Okonkwo. His wife was a valued staff at GTBank before she exited to go into Laundry business and then real estate.

Why did Kennedy encourage his wife to go into Real Estate along with him, we asked a few days ago.

“My wife used to be a banker. Then, I got married to her and she became an entrepreneur. She took over the dry cleaning business, I just set up. From doing dry-cleaning, she saw where I had the most passion for, which is Real Estate. After a while, I realized that we needed her to support us in real estate, and she started supporting and gradually, we started giving her more duties and more responsibilities” and she performed wonderfully well.

“And you know, strange as it may be, she has been able to adapt and cope and she has been given more responsibilities. She loves real estate with a passion. We share the same vision. She shares the same goal. I think for me that’s all that counts. And they say when 2 people get married and they live together, after a while, they start thinking alike. My wife and I sleep and talk real estate. Everything about us is real estate. She has been an asset to our real estate business”

City People can also reveal that Ichechi Chinarhu Okonkwo herself has become very good in that field. She has developed herself in Real Estate matters and today she has become an expert. She has brought her years of experience in Corporate Nigeria to bear on her job as CEO of the 2 successful companies that she runs-Victoria Crest Homes & Laundry King. Just like her husband, she has become a leading player in the real estate industry providing affordable luxury home development for over a decade. When she left secondary school, she wanted to study Medicine to help save lives. She actually got admission, but there was a problem with the course in that University she got admitted to. The medical school was not accredited as at that time so she changed to Industrial Chemistry. Looking back now she says “I am happy today that though I am not saving lives, I am helping to put a roof over people’s heads, wearing beautiful smiles on their faces, picking up and cleaning their laundry and more.”

She is an ex-GTBank staff. She started from GTBank Tiamiyu Savage, Victoria Island, Lagos. She worked with GTBank for 6 years. She then moved into entrepreneurship in August 2011. She is also the DMD of her husband’s company called Nedcomoaks Ltd. She is an accomplished businesswoman who has attended diverse management courses in Entrepreneurship, including Metropolitan School of Business & Management in the U.K. She is a graduate of the notable Igbinedion University, Okada, where she got a BSc in Industrial Chemistry.

Her husband loves her so much. Anytime you mention her name, he always breaks into a smile. No wonder he once said that his journey in life would have been much rougher without his companion and amazing wife, Iche. Last February, on her birthday, Kennedy wrote a lovely tribute in her honour. “Every now and then, someone comes into your life and they make it beautiful. That someone is Iche. After all these years, you’re still my Queen. Hand to hand, we’ve walked and are still walking the journey of life. Together we’ve made our dreams come true and with each passing year, my love for you has grown immensely.”

“You took a gamble to join me on chasing poverty out of my family and our society by building the NedcomOaks Group out of nothing after I shared the vision my late father gave me with you.”

“How else can I explain that I came home barely 7 months to our wedding to inform you that I was leaving the highest paying job in my entire work career, after barely 4 months of service, not even enough to get confirmed and you came along on this white elephant project called NedcomOaks”.

Kennedy calls her The Chief Strategist and Brand Amazon of the Victoria Crest Brand. He usually describes her as My wife, my friend, daughter of the Most High God, my only CEO and the Ugo Simba 1 of Ojoto kingdom.