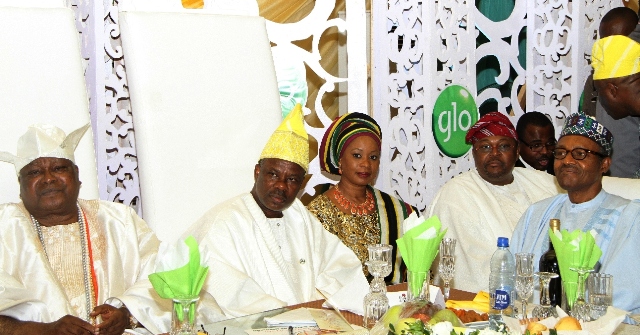 The Awujale himself does not hide that very fact. Many of those who are close to them know and the Awujale himself revealed the depth of their closeness in his autobiography titled Awujale published 7 years ago.

Not many people know that the Awujale and Otunba Mike Adenuga are cousins and then friends. Although the Awujale is much older than Mike Adenuga, he relates with him more like a friend.

How are they related? Mike’s late mum, Mrs. Oyin Adenuga is nee Onashile. According to his autobiography the Awujale revealed that the Onashiles belong to notable and influential families in Ijebu Igbo – the Omo Olu Badejos on the paternal side and the Pariolas on the maternal side. Mike Adenuga is late mother is Awujale’s grandmother, Dorcas Tami Onashile’s daughter.

Not only that. The Awujale in December 1956 went to live with Mike Adenuga’s mum, Mrs. Oyin Adenuga in Ibadan. That was when his secondary school was over. The link is that Mike Adenuga’s mum is Awujale’s aunt.

When he feels the Awujale deserves some rest or vacation he will arrange for him to get one. By his very nature Mike is safety conscious, so he is more relaxed outside Nigeria and so he usually unwinds with the Awujale abroad.

So, it’s not unlikely to see the Awujale chilling once in a while in South of France or the UK with his young wife Oloori Kemi who he likes travelling with and Mike would join them.

Why MIKE ADENUGA Is Close To AWUJALE was last modified: February 7th, 2017 by Seye Kehinde