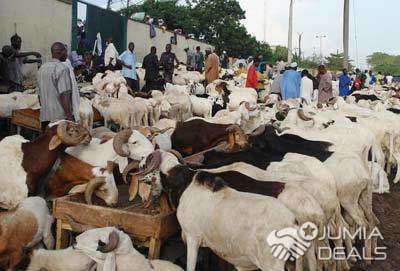 Eil il Kabir is the day Muslims all over the world will come together to celebrate the historic encounter of Nabiyy Ibrahim (Abraham) encounter with Allah on Mount Moriah, Christians are not left behind as many also celebrate the festival with their Muslims friends.

Some factions of Christian faith beliefs that it is forbidden for Christians to eat the meat slaughtered during this festive period, while others from Christian faith sees nothing wrong in partaking in the festive period by eating and drinking with the Muslims. It will shock you that some core Christians not only join other Muslims to celebrate Ileya festival alone but they also kill rams and host guest in the spirit of the festive season.

This is to show that the Eid-Il-Kabir, is not only meant for Muslims and Christians alike. This misconception, according to the Christians who celebrate Ileya is because the festive period comes up at the end of Ramadan every year. In the climax of its arrival, the yuletide otherwise couched the ‘festival of the sacrifice’, is expected to hit the town with a few activities such as buying and selling of rams in its heavy stock, for the celebration across quarters.

The Eil-Il-Kabir honors the willingness of Ibrahim (Abraham) to sacrifice his son as an act of obedience to God’s command. But, before Abraham could sacrifice his son, God provided a lamb to sacrifice instead. In commemoration of this intervention, an animal is sacrificed and divided into three parts. One share is given to the poor and needy, another is kept for home, and the third is given to relatives.

The position of the Ileya-compliant Christians fall within the ambit of the reason that Abraham is the father of all nations, and his faith-driven lifestyle is a virtue, that all Christians across the world coveted in prayers and indeed. According to the Bible, those who identified with Abraham by blood or faith will enjoy the similar bountiful blessing.

Genesis 17;1 shows this; When Abram was ninety-nine years old, the LORD appeared to him and said, “I am God Almighty ; walk before me and be blameless. … The whole land of Canaan, where you are now an alien, I will give as an everlasting possession to you and your descendants after you; and I will be their God.”

It will also shock you to know that the Hajj that comes in the period of Eil-il Kabir was wholesomely backed by the Holy Bible. The book of Psalm 84:5-6 states that, 5 Blessed are those whose strength is in you, whose hearts are set on pilgrimage. 6 As they pass through the Valley of Baka, they make it a place of springs; the autumn rains also cover it with pools.

The Book of Psalms 95: 5 also stated: Come, let us bow down in worship,  let us kneel before the Lord our Maker. Also, the lesson of having open hands and sharing with others is not just a lesson for Muslims! As Christians, God calls us to share with those in need and to live a generous life. Sharing does not only bless those we give to but it blesses us as well!

You will never know a full and joyful life until you are able to give out of generosity and shares what God has given you; which is one core requirement in Islam as stated in its pillar, Zakah. Whoever is kind to the poor lends to the LORD, and he will reward them for what they have done. (proverbs 19:17). The first of the 5 pillars of Islam, which is to acknowledge God as one is evident in the Book of Mark 12:29. The most important one,” answered Jesus, “is this: ‘Hear, O Israel: The Lord our God, the Lord is one. Love the Lord your God with all your heart.

The second pillar which is Salat, talks about the essence of prayer as a true believer of God. Jesus Chris fell to his knees as documented in Matthew 26:39, when he prayed that the “cup should pass over him”. The third pillar is in the spirit of giving. Both Christianity and Islam preaches the benefits of giving, especially to the poor, widow, and orphan.

The fourth pillar is fasting. Both Christians and Muslims engage in fasting. God specifically choose fasting for his worshippers. The last pillar, which is Hajj, also has a biblical premise from the bible. The book of Isaiah 58:6 Is this not the fast that I have chosen: To loose the bonds of wickedness, to undo the heavy burdens, to let the oppressed go free, and that you break every yoke?

Whichever direction one chose to look at it, it is significant that this Eid-el-Kabir is celebrated on Sunday, same day Christians worldwide go to Church to worship God. This tells us that all prayers offered during this solemn day will no doubt command double mercies of God Almighty towards us all.

Christian or Muslim, Enjoy your Meat.

THE BEST THAT YOU CAN BE

How The Republic of Ireland (ROI) Coped...