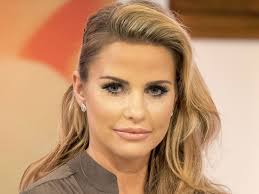 British TV Personality and former glamour model, Katie Price is set to adopt a Nigerian orphan, a move which has reportedly left her exes Peter Andre and Kieran Hayler ‘shocked.’

The mother-of-five, 40, made the revelation on ITV’s This Morning on Monday.

According to her, she has already started the process and had planned to go to Nigeria last weekend but had to cancel as it was her turn to have the children.

She told Holly Willoughby and Phillip Schofield: ‘I always said I wanted to adopt an orphan. I don’t care if they have disabilities or what age they are.

‘I feel like I can offer them a place.’

Katie revealed she was moved into taking action when she got talking to a woman at her nail salon who works with an orphanage in Nigeria.

She said: ‘She was telling me how she was looking after this orphan and I told her I always wanted to adopt.

‘It is SO hard to adopt over here, I’ve looking into it for ages. The thing is, it’s easy to adopt abroad but it’s not easy to bring to them back in the country.

‘Hopefully, something will happen. I still want my own kids don’t get me wrong and will definitely have more. ‘

But The Sun is now reporting that her former husbands Peter Andre and Kieran Hayler are ‘shocked and horrified’ at her decision to adopt a child.

A source said: ‘Kieran and Peter had no idea she was planning to adopt. She had mentioned adopting from the UK a long time ago to Kieran, but Katie didn’t give either of the dads of her kids the heads up she was announcing it on TV this morning.

‘Kieran’s horrified as things are chaotic enough for Katie with five kids and no driving licence at the moment – what will happen when a baby is bought into the mix?

‘They’re probably very concerned that she hasn’t thought it through properly – she’s rushing into it without properly thinking about the consequences. Who knows if she’ll even be living in the same house this time next year?’