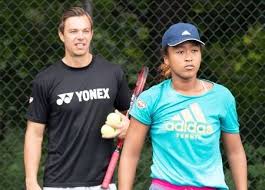 World number one, Naomi Osaka has split with her coach Sascha Bajin 16 days after winning the Australian Open.

The Japanese 21-year-old, whose win in Melbourne sealed back-to-back Grand Slam titles, worked with the German for just over a year before they parted ways.

“I will no longer be working together with Sascha. I thank him for his work and wish him all the best in the future” Osaka tweeted.

Bajin was named WTA coach of the year for 2018. He is a former hitting partner of Grand Slam champions Serena Williams, Victoria Azarenka and Caroline Wozniacki. Bajin thanked Osaka and said he wished her “nothing but the best. What a ride that was. Thank you for letting me be part of this” he tweeted.

Under Bajin, Osaka rose from world number 72 at the start of 2018 to the summit of the rankings little over a year later. No reason has been given for the split, which comes less than six months after he said he was in it for the long haul.