You Are Caught Buying votes, you go to jail – EFCC Declares 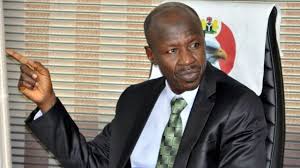 As the presidential election on Saturday draws nearer, the Economic and Financial Crimes Commission, EFCC, yesterday declared that it will arrest and prosecute any politician who engages in vote-buying in any part of the country.

The Acting Chairman of the EFCC, Ibrahim Magu, handed down the warning in a statement made available to Nigerian pilot yesterday, announced a special reward to Nigerians who would volunteer information on those buying or encouraging vote-buying during the polls.

Although the chairman did not specify the amount for each whistle-blower on voter-buyers, Magu made it clear that those who give out cash and those who receive the cash to undermine the electoral process would be treated as common criminals wherever they may be caught.

“We wish to warn Nigerians against those who intend to engage in voter’s inducement,” the acting chairman said, adding, “There are existing laws in the Electoral Act, 2010 (EA), which forbid voters inducement.

“For the avoidance of doubt, Section 124 of the Electoral Act, 2010 says that any person paying money to any person as bribe at any election is liable to punishment of N500, 000 fines or 12 months imprisonment or both upon conviction.

“Section 124 of the Electoral Act, 2010 also states that any person receiving any money or gift for voting or to refrain from voting at any election will be liable to a maximum fine of N500,000 or 12 months imprisonment or both.

“We therefore urge Nigerians to avoid or resist inducement from corrupt politicians and vote for the candidates of their choice.

“We also seize this opportunity to state that that EFCC in collaboration with INEC will reward any patriotic citizen that provides authentic information leading to the apprehension of any culprit of vote buying in accordance with the Whistle Blowing Policy.

“Our investigations and intelligence gathering sources have revealed that certain corrupt politicians have perfected plans to pollute the electoral process with illicit and looted funds.

“We also have intelligence reports on the plans by some countries in collaboration with some politicians and looters to bring in foreign currencies to induce voters and undermine the elections.

“But our operatives in collaboration with sister agencies are doing everything possible to block the illicit funds and ensure credible polls in the country.

“It is our collective duty to resist attempts to corrupt our electoral process by exposing the evil perpetrators,” EFCC declared.

You Are Caught Buying votes, you go to jail – EFCC Declares was last modified: February 14th, 2019 by Igbokwe John