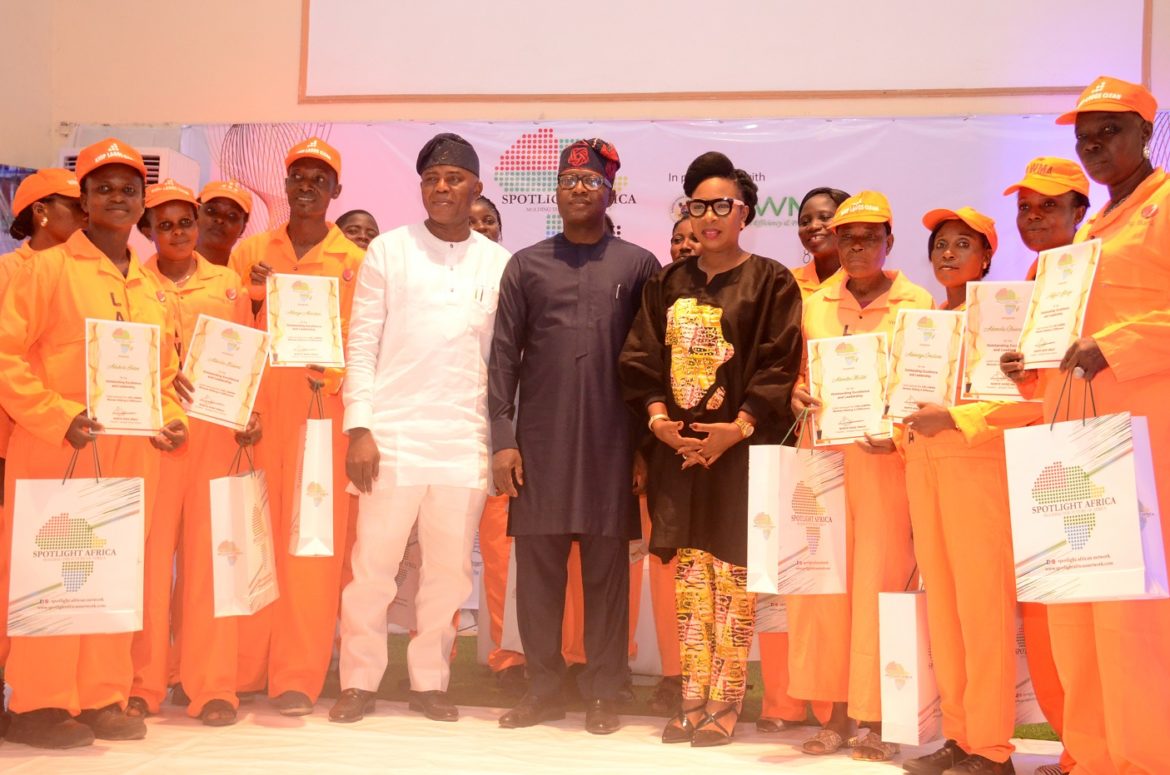 The Managing Director of Lagos Waste Management Authority (LAWMA), Mr. Ola Oresanya, has described the female street sweepers as the engine room of the organization, working round the clock to keep the state clean and sustain the environment.

He said this at Ikeja during an award ceremony organized by Spotlight African Network to celebrate the women workforce of the Authority for their input towards achieving a cleaner and healthier environment in the state.

At the program tagged, “LAWMA Women Making A Difference, Community Service Leadership Awards”, he said: “I use this opportunity to appreciate you all and to commend the Spotlight African Network, for recognizing and celebrating the great roles you have consistently played, in making the environment conducive for all residents and visitors in our state”.

Speaking further, he commended the organizers of the event for recognizing the efforts of the sweepers, and for organizing a safety training course for them.

“Of particular interest to me, is the Safety Training Course, which the group has planned with the Federal Road Safety Corps for the women. This will go a long way in further equipping the women with basic rules of safety, while on their work beats. I must therefore specially commend your organization, for the forward-looking initiative”, he quipped.

The LAWMA boss stressed that the award conferred on the women sweepers would further motivate and inspire them to give their best in the task of building the environment that Lagosians would be proud of, adding that the goal of the Authority was to achieve a cleaner Lagos.

In his remarks, Dr. Muyiwa Gbadegeshin commended the sweepers for their commitment to work, adding that the government would continue to work for the improvement of their welfare.

Also speaking at the event, the President of Spotlight African Network, Mrs. Nonye Pearl Mike-Nnaji, noted that LAWMA street sweepers were the unsung heroines in the Authority’s quest to make every nook and cranny of the state livable, stressing the impact of the sweepers in keeping the environment clean, and enhancing security on the roads.

Mrs. Nnaji reiterated her organization’s commitment to the pursuit of the improved well-being of the sweepers as part of their corporate social responsibility program, adding that they would organize a two-day road safety training, in conjunction with the Federal Road Safety Corps, to equip the sweepers with safety skills on the highways.

The Corps Commander, Ikeja Unit, Federal Road Safety Corps (FRSC), Mrs. Emma Fekoya, in her speech eulogized organizers of the event and congratulated the street sweepers for the well-deserved award, urging the sweepers to be safety conscious, in the course of discharging their duties.

Notable personalities at the event who inspired the women with their real-life stories included renowned actress, Kate Henshaw; Oke Maduewesi, CEO of Zaron Cosmetics; and Ayo Megbope, CEO of No Left-overs.

The high point of the event was the presentation of awards to 150 street sweepers who excelled in the task of keeping the environment clean.

This according to them was a demonstration of their appreciation to the sweepers for commitment and relentless efforts in making sure that the Lagos metropolis is clean, even under harsh and unpleasant weather conditions.