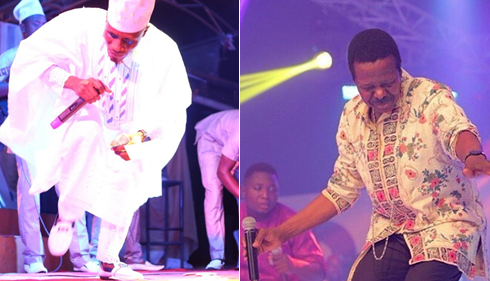 It’s no surprise that Omoba and De Jumbo Beat is the idol ‘du jour,’ lauded by the media with every accolade possible, but few commit the sacrilege of comparing him to our dear king of Juju, King Sunny Ade. He was recently commended by former Minister OF Information, Professor Jerry Gana as the next King Sunny Ade after watching him perform at the wedding of Abuja-based socialites Moris and Adaobi wedding at Space and Function Wuse 2 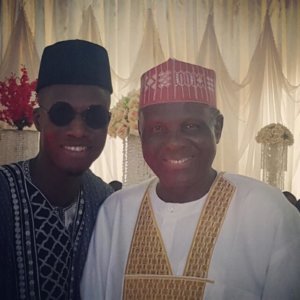 It may seem early to bestow on KSA’s lifetime achievement award on someone who entered public consciousness in the last few years, but there’s something to be said for calling it early. In any case, the similarities are compelling:

Family – Omoba, like King Sunny Ade sing and play instruments while he was still young and growing up with parental influences that also loves music and support his career. He started out from the church and grew to become juju star with exceptional skills in almost all music instruments. Especially the guitar, so there’s at least one “Prince” in the family.

His father was a church organist, while his mother was a trader. Adé left grammar school in Ondo under the pretense of going to the University of Lagos. There, in Lagos, his mercurial musical career started.

Early rise – Sunny Adé’s musical sound has evolved from the early days. His career began with Moses Olaiya’s Federal Rhythm Dandies, a highlife band. He left to form a new band, The Green Spots, in 1967. Over the years, for various reasons ranging from changes in his music to business concerns, Sunny Adé’s band changed its name several times, first to African Beats and then to Golden Mercury

Omoba’s uncle brought him on-stage at age three, and by four, he was working five days a week with the church’s band.

Vocals -Both voices are unique in their high-tenor range and exceptional tone. Each possess a soulful, emotive timbre that retains clarity as they navigate the scales. I point to Omoba’s Thanksgiving, reminiscent of King Sunny Ade’s earlier ‘Merciful God’.

Songwriting – Omoba shares KSA’s knack for creating melodic hooks that penetrate your subconscious. King Sunny Ade was known to create new music by singing the sounds on tape, yet he wrote and co-wrote prolifically. He also drew from various musical styles like Jazz, Rock and AfroFunk.. Bruno’s songs and influences are apparent in his stage skillto fabricate new tunes, which clearly emulates the early style of The Police.

Collaboration. A star Juju player always puts team success first, but without attempting to overshadow, often outshines colleagues. I refer back to KSA’s participation in songs like wait for me, with Onyeka Onwenu, Better Naija with the entire PMAN crew in the mid 90s and Telemiwith Timi Osikoya. Listen to those and tell me whose part stands out. Then, check out Bruno’s role on tunes like; Praise medley, Iba, Owo, and My melody.

Performance – Like KSA, Omoba has wide cross-genre appeal. In 1987, watching a KSA’s album dedicated to Awolowo was like watching Michael Jackson when he left to start his own Solo career. While Omoba is a superb performer and dancer, this is the one facet of KSA’s talent that is impossible to mirror.

Fashion -King Sunny Ade and Omoba culturally have impacted Fashion. Iconic is the word that best describes their outfits.

Omoba brought Fashion and music together. Many Juju singers before him have talked about fashion, but they weren’t mutually together, but Omoba changed that. Writing about fashion is definitely not my strongest suite, but Omoba and KSA’s influence on Fashion is undeniable.

To the point where, many websites are just about how Omoba dresses and how you can dress like him. What he does and what he wears matters, that’s influence and he is one of the most influential fashion figures right now.

Production. When it comes to technical aspects of music, both King Sunny Ade and Omoba are gifted.

Powerful Songs – King Sunny Ade and Omoba both have powerful songs with significant messages in them. I’m going to write about one KSA song and one Omoba’s song and how they’ve subconsciously shape the industry

Now, this brief summary of Omoba’’s accolades, have all come in a period of under five years. In that time, he has been nominated for 43 major awards, including City People’s special recognition.

As far as we know, he is the trending Juju artists in Abuja , he’s as tall and handsome like the king of juju and he’s still young, so there’s still time.

Then again, Sunny Ade was about 24 and already an incomparable superstar when Omo Ode was released and solidified his legacy around the entire world.

So, the truth is, there will likely not be another King Sunny Ade, but if anyone is going to fit into that shoe, its Omoba and De Jumbo Beats.

10 Reasons Why Omoba Is The KSA Of Our Current Juju Music Era was last modified: March 8th, 2017 by Reporter