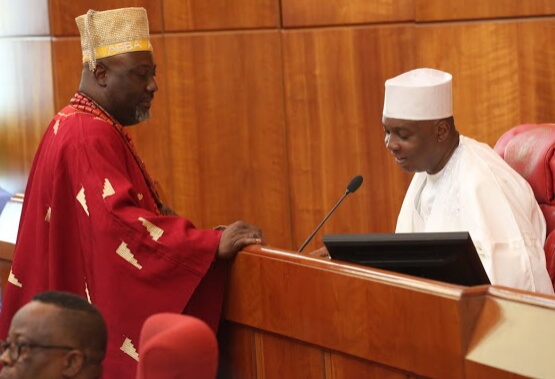 Kogi Youth Movement for Credible Leadership (KYMCL) on Friday protested the donation of 1,260 bags of rice by Senator Dino Melaye and his colleagues to civil servants in Kogi.

The youths carried banners and placards with inscriptions such as “Kogi is not IDP camp”, “Bags of rice cannot stop your recall”.

The protest caused gridlock on the Abuja-Lokoja highway.

Mustapha Abdullahi, KYMCL President, told newsmen that the donation was carried out to mock the state.

“This act is unpatriotic and a slap on the good image of our people and a mockery on the plight of Kogi State civil servants and civil servants across the country who are suffering the same fate due to dwindling economic situation nationwide.

“If this act by the Senators was done in good fate, the donation should have been done for civil servants nationwide.

“But because it was laced with politics of wickedness and hatred for the common civil servant, a mockery 1,260 bags of rice was conjured to demean the sacred pride of our people,’’ he said.

Abdullahi called on all civil servants in Kogi to raise their heads above the parody of bags of rice from the Senators, restating their absolute support for the recall of Senator Dino Melaye by his constituents.