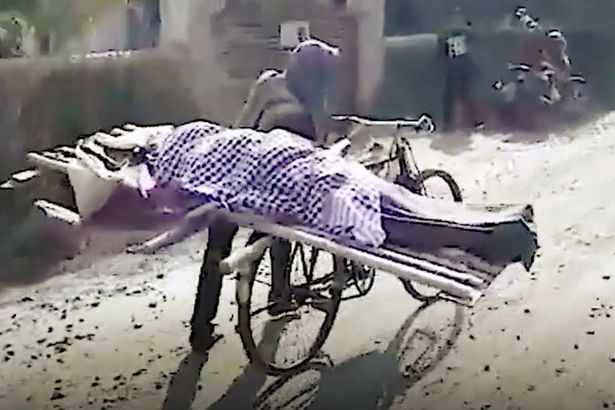 A teenage boy was forced to carry his dead mum to her final resting place on his bike – after neighbours refused to help him.

Saroj, 17, was filmed as he walked barefoot for 5km with his mother laid out across his bicycle.

He took her to the forest, where he dug her grave alone and buried her. Saroj is now an orphan after his dad died when he was seven. He had gone to speak to his neighbours in Karlabahali, Odisha, India, after his 45-year-old mother Janki collapsed and died while walking to get water.

Teenage boy wanted to help to pay his last respects to his mum. He managed to balance her across his bike.

He asked locals for help to cremate his mum, but neighbours refused to him, as he hailed from a lower caste. Upsetting footage shows him being asked by a man what he is carrying.

He replies in a low voice: “This is my mother.” He pushed her for 5km barefoot

He later dug a grave in the forest to bury her India’s caste system is said to be more than 3,000 years old.

Hindus are divided into rigid hierarchical groups based on their karma (work) and dharma (the Hindi word for religion, but here it means duty), the BBC reports.

The caste system is still widely used in remote villages, despite India’s constitution banning discrimination on the basis of caste since 1950.

17-year-old boy, from India, walked 5km to take his mother for burial was last modified: January 19th, 2019 by Reporter