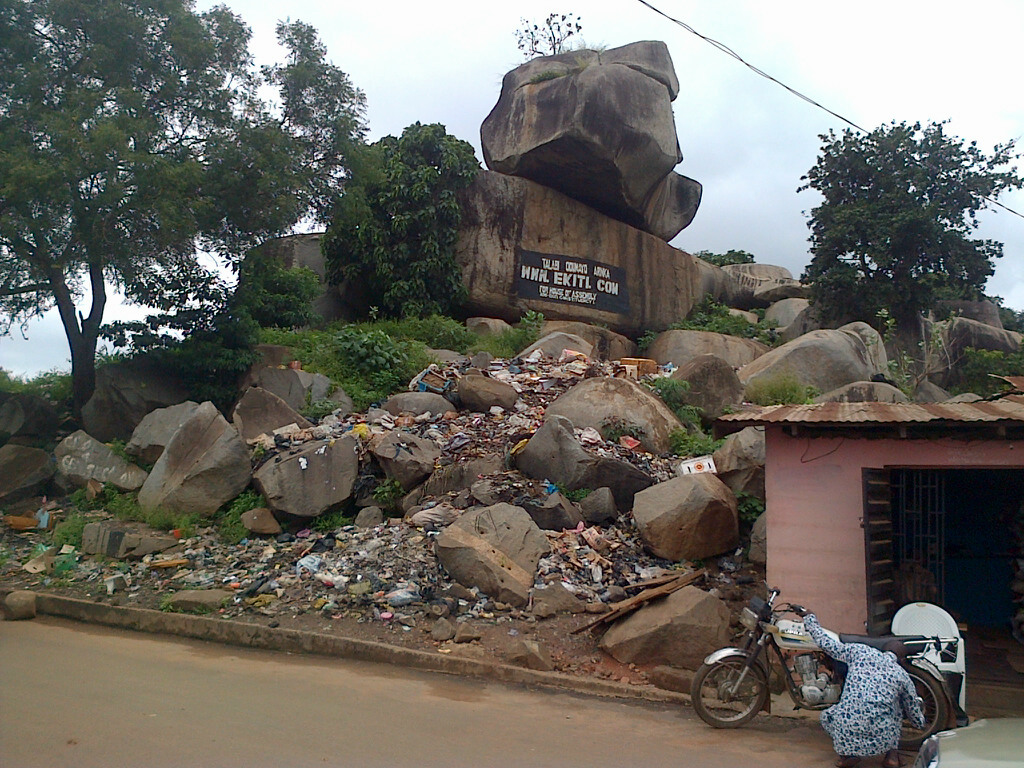 +The Story Of The Tree Causing Problems

There is a big supremacy crisis going on between the Ogoga and Olukere in Ikere Ekiti. And that fight dates back over 200 years ago. But it became an issue when the new Olukere Oba Ganiyu Obasoyin, Okomolose II, The Olukere of Ikere Ekiti, ascended the throne in 2014, following the demise of Oba Olufemi Ijasan, who also fought for the recognition of his throne. So the current Olukere since he ascended the throne as the 30th Olukere had been fighting for the recognition of the Olukere stool by the relevant authorities in the state.

But the Ogoga stool happens to be the only traditional institution the state government recognises in Ikere-Ekiti. These 2 stools Ogoga/Olukere dichotomy rose to a crescendo after the current Ogoga, Oba Adejimi Adu Alagbado, was formally enthroned in July, 2015, a year after the Olukere ascended the throne and he is still waiting for his Staff of office.

It was gathered that, since the emergence of Obasonyin and Adu, there has been one form of tension or the other in the town, and everything revolves around the fact that the Olukere has made undeterred and unrelenting moves to achieve the recognition of his stool by the government, a move the Ogoga is said not to be comfortable with.Ogoga has been telling those who care to hear that the Olukere stool is just a Chief Priest of the Olosunta and he had met him when he arrived the town but not as a King.

He admits that the Ogoga came into the town and had met the Olukere on ground, but he insists that as a prince from Benin, he was the one that established the monarchy.But the Olukere has consistently argued that as a traditional ruler, part of his duties was leading his people in the worship of the Olosunta. Olosunta is the only religious festival of the people of Ikere before the advent of Christianity and Islam in the town.

According to the Olukere, “he is the traditional and religious leader, and their chief priest, who had led the people of Ikere in the worship of the Olosunta and the Ogoga has no role to play traditionally in Ikere up till date”.But the Ogoga and the state government are on the same page on the matter so far. These and other deep-seated causes of division had led to the needed intervention of the Council of Obas in Ekiti state.

It was learnt that this two monarchs who do not see each other eye to eye except during the Olosunta festival, when the Olukere dresses in his full regalia and the Ogoga appears in a wrapper without any sign of royal, met with the Council of Oba that received both the Ogoga and the Olukere in their chambers at the old Governor’s Office in Ado Ekiti, at different times, the senior traditional ruler, also known as the Pelúpelú, had since visited Ikere Local Government Council, where the Ogoga and the Olukere are domiciled; the palace of the Olukere and that of the Ogoga. During their visit to the Olukere’s palace, the visiting monarchs had been shown important relics of hunting instruments that the Ogoga had allegedly arrived in Ikere with.

The Olukere was also said to have shown the council members the hunting bag Ogoga arrived in Ikere with; his sword, his Dane gun and the tusk of the elephant that he had shot and had allegedly traced to Ikere. In addition, he was also said to have shown the visiting monarchs some photographs of earlier visits to the Olukere by previous Ogogas, who, they claimed, would always visit in singlet while the crowned Olukere would receive him in his regalia.

On the part of the Ogoga who insisted that the Olukere was “a mere Chief Priest of the Ikere people,” he admits that the Ogoga came into the town and had met the Olukere on ground, but he insists that he was only a religious leader of the people and the he was the one that established a royalty in Ikere-Ekiti. But at what point did Olukere, whom he referred to as the Oloje, have his crown and by whom? Who are the Olukere Kingmakers?

Also asked was how is an Olukere elected or selected and by who? The Ogoga made it clear that how come that at the installation of any Ogoga, the first point of call is the home of Ikere first settler who is the Erepupu, and not at the Olukere’s home at Odo Ule, and no reference is made to Olukere during the rites? This supremacy battle had been going on for years until 3 years ago when these two monarchs became kings in the same community.

Ikere-Ekiti is the second largest town in Ekiti State and the home of two traditional rulers, Ogoga and Olukere, both of whom are laying claim to supremacy over the other. Today the issue of traditional institution in the community has been one of the most controversial, with the Ogoga acknowledged as the paramount ruler while the Olukere is regarded in history as the first royal institution in the town.Since the colonial days, it had favoured the Ogoga as the recognized traditional ruler of Ikere while traditional history and local folklore favour the Olukere as the founder of the community. While the palace of the Ogoga is located in Uro area of the town that of the Olukere is situated in Odo-Oja and the two locations are a walking distance from each other.

ABOUT THE ANCIENT TREE

The general believe is that no town or community is found without it’s symbol to indicate their settler in the town. Ikere Ekiti is not left out and some of the historical monuments are:

EJIBAUSI CENOTAPH which has been the seat of any reigning Olukere for their annual Ikere Traditional Festival. Also is the OGUNAJOHAN CENOTAPH,  it houses the tree which is being used annually for prayers, for peace and progress in the land and houses the cow that is handled by OSAKA age group from the three quarters of Ikere to render their annual traditional prayer and royalty to both Olosunta and Olukere the founder of Ikereland since 1107 AD.

Among other monuments are the traditional deities in Ikere Ekiti which are being control led and coordinated by the Olukere. And following the urban renewal effort of Gov. Fayose, the Government and Olukere in Council agreed on the repositioning of three items and placing them within the perimeter of the fourth.

The fourth item is not part of what to be removed, the contractor has agreed that he would ensure the construction of a befitting roundabout around the fourth item in other to harbour the other three items that were uprooted. This ancient tree is said to have spiritual implication on the soul and existence on the face of the Earth of whoever occupy the throne of Olukere. According to findings, the ancient Tree branches are always cut after the death of Olukere, so cutting it while the olukere is alive  would  have  a bad implication to the town and people.

In order to prevent the cutting of the ancient tree, it was said  to have  led to the crisis in the town and due to the quick intervention of the state government and the security personal, we can authoritatively tell you that peace has returned to the state as the contractors are back to work.

MEET THE OGOGA OF IKERE EKITI  AND THE OLUIKERE OF IKERE

Oba Adejimi Adu Alagbado is a trained marine captain who recently retired as Head of Marine Operations of Exxon Mobil, and he is the former president of the Association of Master Mariners in Nigeria.

He ascended the throne of his forefathers following the death of his predecessor, Oba Samuel Adegoke Adegboye, the Ogoga of Ikere Ekiti who reigned for 43 years. Kabiyesi who had passion to become a medical doctor but ended up as a mariner and was promoted as  captain in 1984 at a relatively young age. These enabled himto travel all over the world.

After his command, he worked briefly with Golf Oil Company of Nigeria ( now Chevron) in 1986 and 1987. That was where he was trained as a marine master. In 1997, because he wanted to settle on land, he applied to ExxonMobil as a marine master. From there, he was transferred to the United States. And he only came back to Nigeria on transfer in 2005. He later became a  marine manager for Exxon Mobil operations in Nigeria where  he retired and in July 2015 he ascended the throne of his forefathers as the Ogoga of Ikere Ekiti.

He was born into the Catholicism before he went to mecca to become an Alhaji. He was the pioneer chairman and president of great socialite club 10. He was a sportsman who loved boxing and football. Before he became the king, he was the Borokini of Idunmiland. He ascendeded the throne of his forefathers on the 16th July, 2014 as the 30th Olukere of Ikere kingdom.