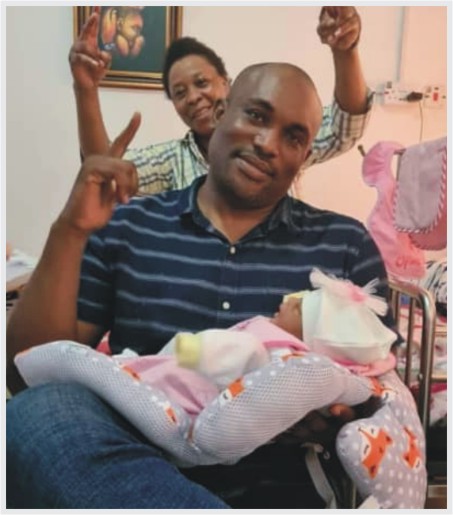 It is, indeed, a year of jubilation and celebration for 2 popular movie stars, Browny Igboegwu and Tricia Asiegbu, as they both welcomed their first babies 10 years after marriage.

Tricia Asiegbu Kerry welcomed a baby girl with her husband, Kingsley, on her birthday, 10 years after waiting.

The couple got married in 2009. She is an actress and television personality. She is the host of a popular TV programme, “Bold Faces”. She has featured in many movies, but her role in the movie entitled: Samadira shot her to the limelight. After a while, she created her show Bold Faces, a 30 minutes inspirational programme on television that showcases Africans who have excelled so well in sports and other careers. The programme was also an avenue to celebrate African Footballers who have brought pride to Africa by appreciating and rewarding them with a legendary award.

In 2009, Tricia walked down the aisle with Kingsley Kerry, her long-time boyfriend and they were both joined at the Holy Spirit Deliverance Ministry, while reception took place at the Best Southern Hotel in Lekki. At the time, many Nollywood stars flooded the social media with pictures to celebrate the beautiful actress-cum-presenters, who is very successful and highly influential.

Also, Nollywood actor, Browny Igboegwu and wife, Becky, welcomed their first child after 10 years of marriage. The highly talented actor took to his Instagram page to recount how he and his wife were mocked by people and called different names according to him.

“Get another wife, time no dey, age is no longer on her side, find a girl and give her belle at least. Time no dey ooo! Browny hmmm, you dey try for how long you go wait? Oya adopt baby first as you dey wait. All these Asaba girls, who know what she has done that she couldn’t conceive. Hmmm! Is it buying a new car? Let him born naa, you no go understand because you never born, don’t worry, when you born, you will understand, I love this couple, you will never know they don’t have a child. God help them. Your children must be up to 4 now, it has been long you got married”. All these and so many others were the words from people’s mouths. You can imagine how I felt all these while, hearing all these from both people who felt my pains and those who mocked me. I silently took it to God in prayers and today, my wife and I have reason to say thank you Lord”.

The actor got married to his beautiful wife, Becky, and has proved himself as one of the accomplished actors in Nollywood.

Brown Ifeanyi Igboegwu, popularly known as Browny Igboegwu, is a famous actor, producer, model and television personality. He is very creative and perfectly interprets roles. He is a graduate of Public Administration and International Relations from the University of Nigeria Nsukka in Enugu State.

He joined the Nigerian movie industry in 2005 and his role in the movie entitled Expensive Error shot him to the limelight. So far, he has featured in over 200 movies and still counting. He features mostly in action movies. He was also named the 12th Chairman of the Anambra State Chapter of the Actors Guild of Nigeria in 2015. He was also made the Executive National Secretary in the Conference of Chairmen of Actors Guild of Nigeria and in the course of his acting career, he has received numerous awards within and outside the country.

Apart from acting, he is also a philanthropist and head of the Board of Trustees for Brownbourg Foundation and some of his activities include visiting various orphanages almost on a monthly basis and handing out relief materials. He is also rated as one of the richest actors in the movie industry.

READ ALSO: WHY YOU SHOULD NOT JOKE WITH VITAMIN D

Why You Should Not Joke With VITAMIN D