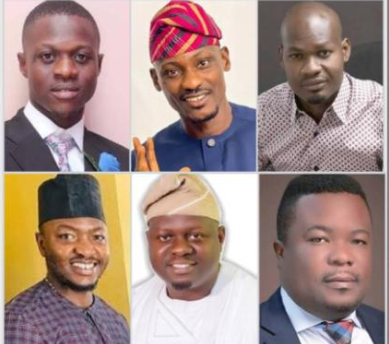 There are some young men who are making waves in business in Ibadan, the capital city of Oyo State. These are the vibrant young entrepreneurs who are highly determined to stay afloat of their games irrespective of the enormous challenges business owners battle with on a daily basis. They are young men who have proved their mettles over the years and have convincingly stand the test of time. While some of these young might have inherited the business acumen from their lineage, others are those to best be described as self-made guys. But above all, they are all hardworking, committed and industrious young men.

In this special report, City People’s Dare Adeniran (08057639079) presents to you the Ibadan wave making young businessmen dominating their various sectors. Banking, Oil and Gas, Auto, Agric Business, Fashion, Media, Deco, Photography, Entertainment, Night Club/Lounge, Real Estate and what have you. They are doing pretty well in all these sectors of human endeavors. Read on.

Idowu Lamidi is a construction expert and the MD/CEO of a popular real estate coy in town, Dollar Construction. He plays big in the sector in Abuja, Lagos and Ibadan. His estates are scattered all over. His 105 units of housing estate in Jericho Idi-Ishin GRA, Ibadan has been a great success and he has moved to other places within the ancient city.

He’s the Chief Executive Officer of Fanfaro Oil Nigeria and Chairman, Olarexglobal Motors. This young man’s success in business is phenomenon. He has been able to establish his presence in the business world within a short period of time. His Fanfaro Autofest initiative has always been fantastic. It’s an annual event which attracts big names across different sectors from all over the country to the ancient city of Ibadan. Above all, Adekunle Olanrewaju is a philanthropist.

Akinnusi is an astute banker with over 15 years of experience in that sector. He is the MD/CEO of a CBN licensed financial institution with head office in Ibadan, Oyo State, Fullrange Microfinance Bank Limited. Prior to his present position, he had worked for various banks including FCMB Plc, UBA Plc and was involved in strategy formulation and implementation, budget preparation and implementation etc. He also worked with Access Bank Plc. He is a keen adaptor of technology and modernity.

He is the founder of Credit Capital Services Limited, a non-bank consumer lending firm with branches in over 8 states in the country. He is a member of the Chartered Institute of Bankers of Nigeria (CIBN). He is a certified microfinance banker.

The Ijebu-Jesa born businessman, Olubunmi Faseru is the Chairman/President Aug 7 Autos and Faseru Nig Ltd. He is one of the hottest motor dealers in Ibadan. Mr. White as he’s popularly known is also into farming. His father, High Chief Dele Faseru is a PDP leader in Osun State. He is a member of the Institute of Chartered Secretary and Administration (ICSA). He attended Government College, Ibadan, ijebu-Jesa Grammar School and Federal Polytechnic Offa.

Alhaji Shakir Adebayo is the CEO of Apex Fabrics in Ibadan. Apex Fabrics is very popular in Ibadan, especially at Bola Ige International Market, New Gbagi. It is a one stop shop for all kinds of fabrics. Shakir, who learnt the rudiments of fabrics business from his mother, is a graduate of the University of Ado-Ekiti, Ekiti State. He started fabrics business years back while he was still in school. Within a short period of time Shakir has built his business name into a big brand in Ibadan, Oyo State and beyond.

Yinka Sanusi is a young, dynamic entrepreneur in the bespoke fashion business. His journey into fashion world began when he was in the University. He simply liked to give unique specifications to fashion designers to have them tailor his wears according to his taste. The resulting styles began to appeal to his peers who in turn started to trust him with their own customized wears for a price. From providing bespoke shirts, trousers etc for friends and course mates, the company D’Ace Tailoring was birthed after he graduated from the university, as he decided to fully commit himself to the fashion business. The award winning D’Ace Tailoring has since empowered many young Nigerians through its training school and created job opportunities for many.

Timmy Jatto is the MD/CEO of the popular Timjat Global Resources, the mother company of Timjat Interiors in Ibadan. He has a Bachelor’s of Science (BSc) degree in Library and Information Science from Ambrose Alli University, Ekpoma, Edo State. He runs companies with history in the Furniture, Telecoms and Airtel HBB ‘super dealer’ in Oyo, Osun, Kwara and Ondo states. His current exploit is in Interior design and decorations with his company, Timjat Interiors. Timjat Interiors is into home and office Interior decorations with exquisite Interior decorative furniture and the likes.

Sanni Muyideen Olakunle is the GM/CEO OGR Empire. He is a native of Ibadan. Through OGR, Muyideen Olakunle is really changing the face of entertainment sector. His OGR Entertainment, a subsidiary of ORG Empire, is becoming a household name in the ancient city and Oyo State generally. OGR Empire is primarily into water (both sachet and bottle) production, Gas and other businesses. While ORG Entertainment is into Events Planning and Artistes Management, Recording Studio, Music Productions, Photo/Videography and Video Editing.

Mathew Kehinde Ogunniyi, popularly known as ‘EXPY’, is from Ibadan. He’s a serial entrepreneur with interest in Fashion, Entertainment, Real Estate and Agriculture. He is also a philanthropist. Through Nigeria Youth Fashion and Empowerment Week (NYFEW), Matthew Ogunniyi has empowered over 150 youths across Nigeria. He is also a politician and the gubernatorial candidate of the Young Progressives Party (YPP) in the coming 2023 election.

Chief Ahmed Ajibola, popularly known as General H, is the CEO, COPACAPANA Group of Companies. He had Bachelor’s degree in Biochemistry from the prestigious premier university,  University of Ibadan. His penchant for business during his formative years made him to join the family business after his NYSC, and he has so far taken the business to another level with the exportation of charcoal. He has since diversified into other businesses. His ‘COPACAPANA’ group is into various business ventures ranging from Charcoal Exportation, Hospitality, Entertainment, Automobiles, Nightlife to mention but a few.

Within the space of two years, the COPACAPANA Group of Companies has been able to set its own standard. He is also changing the face of night club in Ibadan with his COPACAPANA Club.

Favour Essang is the CEO, Dexterity Plus Decorations. A native of Oron Uyo Local Government Area Akwa Ibom state. He had his diploma and BSc from the University of Ibadan. He also has Diploma in Statistics and BSC in Library Science. To Favour,

decoration (Interior and Exterior) is making sense out of nonsense, spicing up a done food and making beauty out of a little or large space, modifying and producing a new look out of an event space. He believes everybody loves and appreciate beautiful things in the beautiful and well organize space. Favour, no doubt, is the hottest in this sector.

Adewumi Oladiti is the Managing Director, SAO Petroleum. His tenacity, exposure and experience have been brought to bear on the day to day running of SAO Petroleum. He has built the family business into an enviable stage within a space of ten years. Aside SAO, Ade also has his personal business, D20 Logistics, which he has been running successfully. Adewumi is a Master’s degree holder in Business Management from Ladoke Akintola University of Technology (LAUTECH).

Morakinyo Goodness runs one of the most flourishing private primary/secondary schools in Ibadan. The school, Valencia College has become a household name in the ancient city. He is an entrepreneur with a great passion for education. An alumnus of the Federal University of Agriculture, Abeokuta (FUNAB) with a bachelors degree in Engineering. A fellow of the Chartered Institute of Educational Management and Administration in Nigeria. As an undergraduate he founded Soluxions Consulting Ltd with offices in Lagos, Abuja and Port Harcourt, where he was the lead consultant. It is a company with interest in impacting knowledge on wealth creation, business strategy & financial empowerment.

In September 2011, he co-founded a school in Ibadan with his wife which they named VALENCIA SCHOOL, and became one of the youngest school proprietors in the history of Nigerian Education sector. Valencia Group of Schools has grown to be a force to be reckoned with in Oyo State and its environs and the school has won several awards of excellence. Morakinyo Goodness recently co-founded a real estate brand, Mint Avenue which is into Housing Development Solution, r

Seun Oluwajana, popularly called Seun Jana, is one of the pioneers in the New Generation Media, Advertising and Entertainment industries, especially in the South West part of Nigeria.

He started his Media and Entertainment career from the ancient city of Ibadan in 2018 with his first company Twenty805 Concepts before working with different organizations like Nigerian Tribune, Westlife Magazine, where he proceeded to the first privately- owned radio station in Ibadan, where he transformed their PR, Branding, Events and Entertainment beats to be the most competitive in Southwest.

Seun Jana launched his media and advertising agency, Canwest Media Nigeria Limited in 2018. It has since grown in leaps and bounds to be one of the biggest Media outfits with several multinationals and indigenous companies to its long list of clientele.

The 33-year-old Morenigbade Adedapo Idris is a serial entrepreneur. He has ventured into business while still in the university, selling phones and accessories. Today, his business UNIGAB Global Concept has grown to become a bigger brand. He owns a water packaging factory in Eleyele area of Ibadan, known as Gaby Splash. He also has the same water factory in his hometown, Ikire, Osun State. He also sells exotic drinks under the name OPAD Drinks in Abuja and runs a logistics company OPAD Logistics.

Konyin Owoeye is as rich and as brilliant as they come. He is the son of the founder and Chancellor of Lead City University, Ibadan, Prof Jide Owoeye. Konyin is a silver spoon of the finest breed but carries no airs, no chip on his shoulder. He is the CEO Lead Radio 106.3 FM, Ibadan and a member of the governing council of Lead City University. Konyin plays big in the entertainment and sports sectors. He is a former President of the Ibadan Polo Club.

Topside as he is popularly called is in charge of the Rock Night Club, located at the Palms Mall. He is also into the auto business and other lounges on Liberty Road and Akala Way.

Saheed Lawal is the young man behind the popular SWITCH Lounge and Night Club in Ibadan. He sure knows his onions, as he keeps bringing in fresh ideas into his business from time to time. He is also into boutique business. In fact, he started as a fabrics merchant at Gbagi.

Sola Awujoola (@mylivelihood) is a luxury jeweller and the brain behind the popular No. 1 Hotel and Lounge in Ibadan. He is well connected both home and abroad. Many top Hollywood stars are his clients. He customises accessories and gadgets for most of them. He is married to Deola, the beautiful daughter of Senator Smart Adeyemi.

Why More People Are Suffering From DIABETES