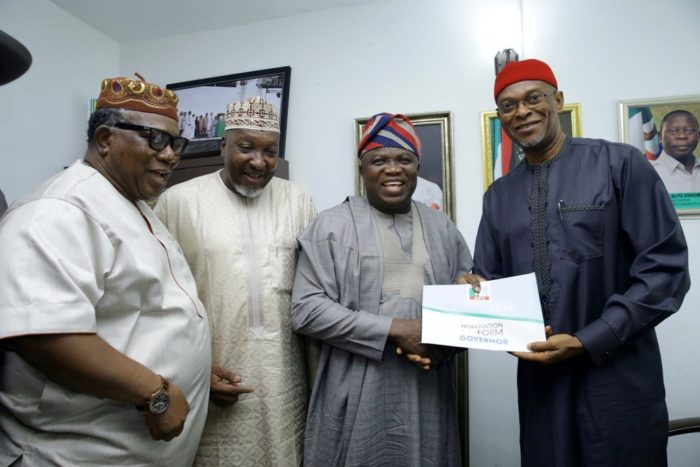 As the weather continues to heat up for the 2019 general election, a report on the plot to stop the Lagos State Governor, Akinwunmi Ambode, has been dismissed by stakeholders of the ruling All Progressives Congress (APC) in the state — but emerging signs show he is fighting for his political life.

Credible sources have informed Journalists that there is a threat to impeach Ambode if he does not drop his second term bid.

Over 50 council chairmen loyal to Bola Tinubu, his estranged godfather, have met and pledged their support for Jide Sanwonolu, who is believed to be Tinubu’s preferred choice, according to APC insiders.

The council chairmen are the most influential grassroots mobilisers under the direct primary system adopted by APC to pick governorship candidates.

Most members of the Lagos house of assembly are also loyal to Tinubu.

“Meeting is over. Ambode is out. Jide Sanyaolu Sanwonolu is the new governor of Lagos. All 57 local government chairmen have signed his form. It’s over,” the source said.

TheCable could not independently verify this claim.

On Monday, the governor, alongside some members of his cabinet, stormed the headquarters of the APC in Abuja to get an expression of interest and nomination forms for his 2019 bid.

He later told some APC members that he was not tired and needed their support to continue in office beyond 2019.

“With your support, we have made Lagos a better place and changed the face of our state. I did not do it alone; we did it together because you believed,” he had said.

“So, I humbly call you again, to give me your support as I seek to continue with your mandate to steer the affairs of our state. I ask you to believe again and together, let’s achieve more.”

However, Sanwonolu and Obafemi Hamzat, two prominent members of the APC in Lagos, also picked the nomination forms for the governorship election of 2019.

Sanwonolu, who served as a commissioner under Babatunde Fashola, Ambode’s predecessor, is currently the managing director of Lagos State Property Development Corporation (LSPDC).

He is being backed by Mandate Movement, a group fiercely loyal to Tinubu.

At a meeting held after Sanwonolu picked up his nomination form, James Odunmbaku, an ally of Tinubu known as “Baba Eto” in the political circle, said, “Sanwololu is the incoming governor of Lagos.”

READ ALSO: SULE LAMIDO REPLIES ATIKU, SAYS ‘I’M YOUR SENIOR SO I CAN’T STEP DOWN FOR YOU’