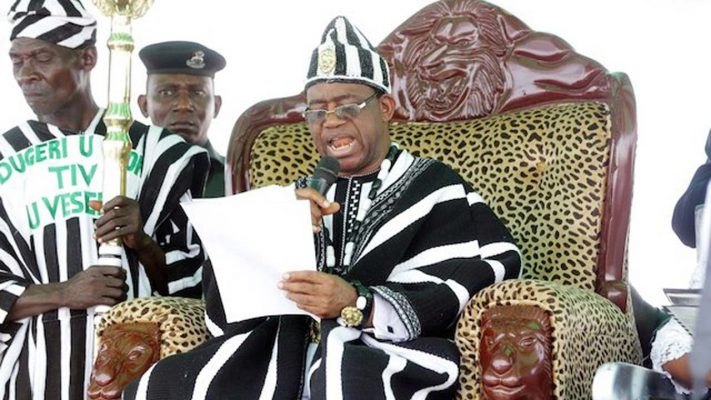 The paramount ruler of Tiv people worldwide and chairman of Benue State Traditional Council, Tor Tiv, Prof. James Ayatse, has appealed to politicians in the state to eschew violence as well as thuggery in the forthcoming election or risk coming under curses of the land.

The royal father threatened that any politician who would cause violence in the state before, during or after the elections would suffer the consequences of such actions.

“The traditional institution is committed to peace because we are at the receiving end. Whoever wants to cause chaos, the land will be against such a person. We must avoid thuggery.

“I am therefore, appealing to politicians to avoid thuggery,” he said.

Ayatse spoke in Makurdi during the signing of peace pact by 32 governorship candidates of various political parties vying for elections in the state, an event organised by the Independent National Electoral Commission (INEC).

The monarch enjoined politicians to campaign vigorously for their election by selling their ideas peacefully to the electorate instead of engaging their opponents in the tear-him-down syndrome which is capable of disrupting peace in the society.

He insisted, “They (politicians) should go out and campaign, if they are loved by the people, they would be voted for. We are here to talk about peace ahead of the forthcoming general elections. If there is any people who desire peace, it is Benue. We have suffered a lot. That is why we are talking peace.”

“We as traditional rulers live with the people and we know the pains they go through. We feel the pain when we are faced with violence. We are totally committed to peace in Benue and we are prepared to pay the price to ensure peace.