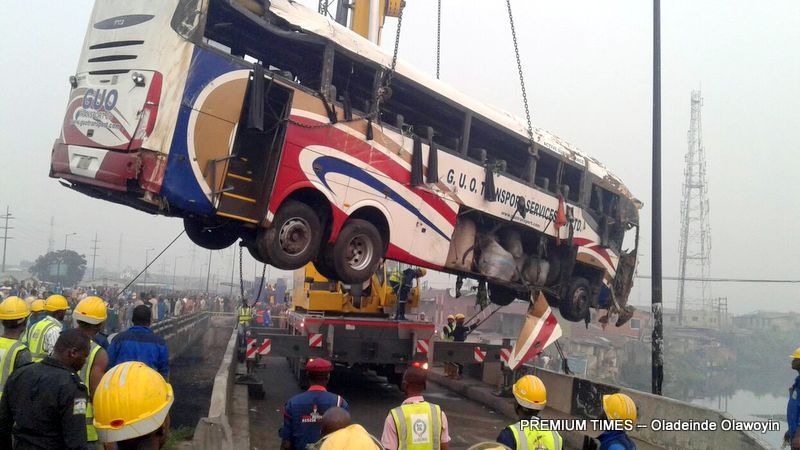 Three yet-to-be-identified people died in an accident in the early hours of Friday when a luxurious bus skidded off its track and plunged into a nearby waterway in Lagos.

According to the Lagos State Emergency Management Agency, LASEMA, there were 59 passengers on board. Twenty three people got injured and were treated on the spot by a joint team of the agency’s Paramedics and LASAMBUS.

Kehinde Adebayo, LASEMA’s spokesperson, added that nine of the treated victims were taken to the Lagos State Trauma Centre at the Toll Gate for further treatment.

Three passengers, however, died on the spot. The victims include the bus conductor and two other passengers whose identities were not immediately known.

Their bodies were recovered from the canal, LASEMA said.

The bodies and the bus had been handed over to the men of the Nigeria Police, Owode Division, the agency added.

The General Manager of LASEMA, Adesina Tiamiyu, said a proper investigation would be conducted on the incident.

He however advised motorists to be safety conscious and avoid over-speeding while driving, especially during night journeys

Must Read : See The 7 Things Men Find Attractive In Women

“No Matter What Happens I Will Manage For Another Season” – Arsenal Boss, Arsene Wenger Scared Of Sack