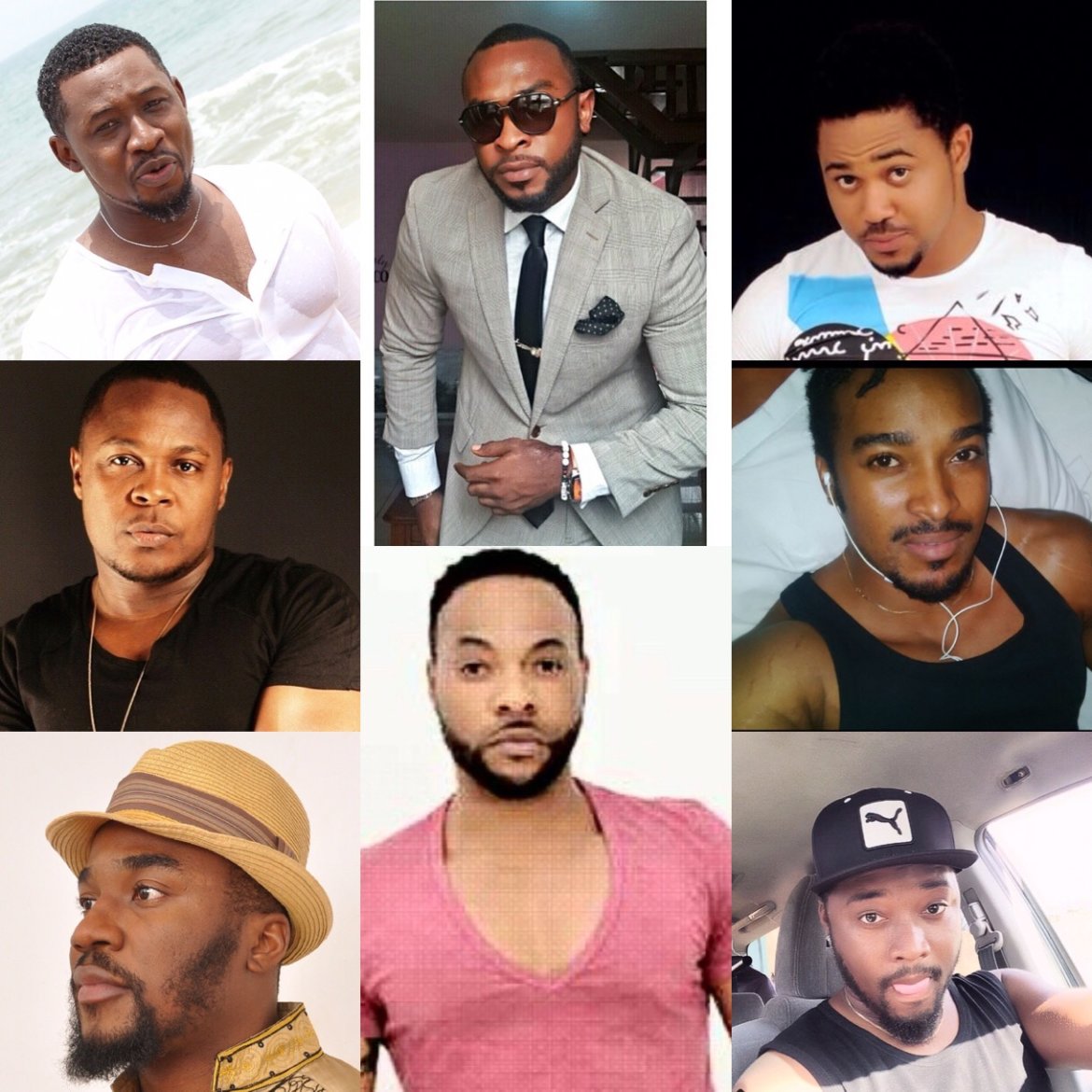 The Nigerian Movie industry is growing rapidly and it seems to be one sector that recession is yet to deal a blow as more hit movies make the cinema on regular basis. As the 2017 edition of the City People Entertainment Awards draw nearer, Head of Movie Desk, VIVIAN ONUORAH profiles the 30 young actors whose faces are constantly rocking the cinemas and movie scene.

Talented actor Ken Erics started his acting career as an under graduate, while studying Theatre Arts at the university. He made his breakthrough in acting few years after his graduation and hasn’t looked back since then. He is arguably the hottest actor in Asaba and its environs and has also featured in several cinema movies, working with the likes of Emem Isong, Uche Jombo, Elvis Chuks, among others. Asides the many productions he has recently featured in, he also played a role in the hit movies Omugwo and Okafor’s Law currently in cinemas.

Ever since multiple award winning actor Oc Ukeje hit the movie scene, following his victory at the rested Amstel Malta Box Office reality show, it has been a roller coaster ride for the slim built actor. Oc Ukeje, whose career has taken him far and wide, has worn so many awards lately that he may be losing counts soon. Among his wins are brand new cars, several millions and of course numerous plaques. He has featured in many blockbuster movies and one of his latest flicks North East is currently rocking the scene.

For this talented and young actor, his acting skills came afore with his role in the movie Flower Girl, earning him nominations and recently Africa Magic Viewers Choice Award. The 32 year old actor hails from Anambra State and is a Mass Communication graduate of Benson Idahosa University; Benin. He has featured in Private Storm, Finding Mercy, and Tinsel among others. One of his latest movies Okafor’s Law is currently rocking the cinemas.

Anthony stamped his presence in Nollywood with his role as a pilot in the award winning movie Last Flight to Abuja. He holds a BSC in Multimedia&Film Production from the Thames Valley University UK and a Diploma in Performing Act for Screen from Goldsmith College Uk.Among his other appearances include popular TV series Tinsel and Lekki Wives. Some of his latest movies include Amara, Diary of a Married Man, etc.

Tope was shot into limelight with his role in popular soap Edge of Paradise. He is an actor, voice over artist and broadcaster. He has won several awards like AMVCA, Nigerian Entertainment Awards, Golden Icon awards, among others. One of his latest flicks rocking the cinema is titled Ojukokoro.

Tall and dark skinned actor Gbenro is one of the popular faces on Tinsel and some of his latest movies include When a Woman Loves, The View among others.

Handsome and talented actor, Kenneth Okolie came into prominence in 2010 when he won the Mr. Nigeria competition and went ahead to emerge 3rd place at the Mr World contest. Kenneth hasn’t looked back since then as his face has become a major asset in Nollywood. He has featured in major cinema movies and lots more. Some of his latest movies include Stranger, Mystified, Stormy Hearts, etc.

Best described as a dynamic actor, Zubby Michaels has a unique personality that can suit into any role with ease. Featuring mostly in movies produced in Asaba and its environs, he is one of the budding talents in Nollywood.

Asides his talents, his looks also stands him out from his counterparts. Wave making actor Daniel K Daniel is one of the hottest sensations in Nollywood at the moment. In his 20s, he has won awards like AMVCA,Best of Nollywood revelation, City People Best New Actor and some others. His latest movies include 76,Talking Dolls, Scorned etc.

Star actor Fredrick Leonard started acting some years ago and is fast becoming a major force to reckon with in Nollywood. The multiple award winning actor has featured in movies like Deepest Cut, Domestic, Lets Have A Wedding and many others recently.

Award winning actor Femi Jacobs was  jolted to fame with his first ever role in the multiple award winning movie The Meeting, where he played a lead role. The movie produced by star actress Rita Dominic and Mildred Okwo owned Audrey Silver Productions was a major mile stone for the talented new actor. He is also a gospel singer. Some of his latest movies include Remember Me, When a Woman Loves, Deep Fever etc.

Star actor Seun Akindele has been in the industry for a while now but he is making waves with his acting skills and good looks. He has featured in numerous movies to count and soaps like Spider, and others. Some of his latest works include Lets Have a wedding, Stranger in My Bed, Rivers Between etc.

Light skinned and chiselled face Alex Ekubor was swept into prominence after the 2010 Mr. World competition where he emerged the First Runner Up. He delved into acting shortly after and has done so well for himself in the short spate of time. He is also a model. Some of his latest movies include Lost In London, Not Enough etc

Light skinned and lanky actor Ik Ogbonna makes the list. He has featured in a good number of hit movies and some of his latest include Hire A Man,Excess Luggage etc.

Fast rising actor Okey Uzoechi is another young act rocking the movie industry. He has featured in movies like A Long Night, Murder at Prime suites among others. Some of his latest movies include Something Wicked, Dinner etc.

Talented actor Enyinna Nwigwe took his career a notch higher ,with his spectacular performance in the blockbuster movie Black November shot in Hollywood. He is among the glamour boys of Nollywood.Some of his latest movies titled The Wedding Party and Hire A Man are currently rocking the cinemas .

Tinsel star Gideon Okeke makes this list. Asides acting, he is always stepping out at Alist events. Some of his latest movies include 93 Days, etc

This talented actor came on the scene few years ago but he is fast becoming a popular face in movies. Some of his latest movies include Husband of Lagos, Hire A Man  among others.

Talented actor Deyemi Okanlawon is one of the hot faces rocking the movie scene. Some of his latest movies include Dinner, etc.

Wole Ojo who stormed the industry few years ago is not resting on his oars, he has featured in several movies titled Silver Spoon, Facade, Pathetic etc.

Multiple award winning actor Joseph Benjamin also makes the list. Despite having spent several years in the industry, he still remains one of the leading actors. Some of his latest movies include Isoken, Desecration, etc.

Star actor Mike Ezuruonye is one of the renowned movie stars Nigeria boasts of and he has kept the flag flying till date. He recently added production to his profile with his new hilarious comedy that rocked the cinemas titled Brother Jekwu which he also starred in.

Comic actor Ime Bishop also makes the list. Some of his latest movies include Lost In London, The Boss is Mine etc.

Ever since his debut to fame through the hit movie Surulere,talented actor Seun Ajayi keeps soaring. Some of his latest movies include Ojukokoro,93 Days etc.

Despite his new office as a member of Lagos State House of Assembly, talented actor Desmond Elliot still has passion for his first love and is always present at most movie related event. His latest movie Unveil hits the cinema soon.

Popular comedian Ayo Makun known as AY is sure giving a lot of actors and producers a run for their money with his hit movies which he also starred in.They include A Trip to Jamaica, 10 Days in Sun city, 30 Days in Atlanta.

Talented actor Kunle Remi is another popular face rocking the movie industry. Some of his hit movies include Missing Step,Tiwas Baggage etc.

Star actor Chidi Mokeme may have been off the scene for too long but he launched back with his role in the multiple awards winning movie 76.

Seized N13billion: Why our probe panel will operate in secret — VP Osinbajo