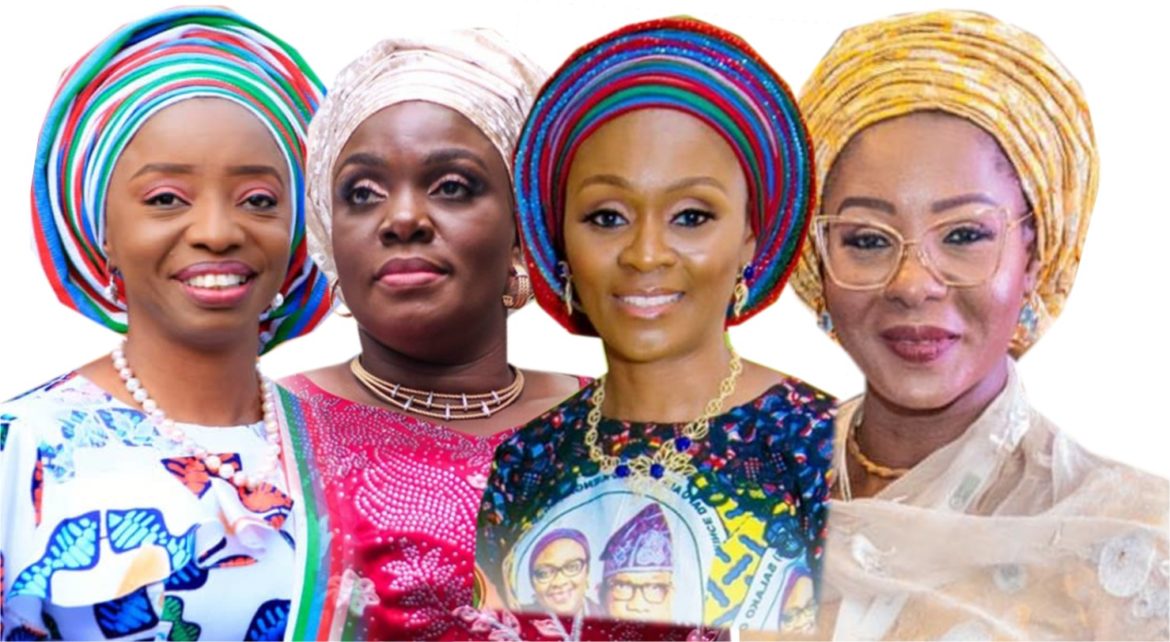 Beautiful, Sassy, Classy and stylish are words that best describe the 4 new South-West First Ladies who have taken the baton to support their husbands, as Governors. In all the states, there are 4 Southwest States, Lagos, Oyo, Ogun and Kwara that stood out from the rest. Behind these new Governors are dedicated women who are hardworking. They have proved beyond a reasonable doubt that they have all it takes to serve their states alongside their husbands.

They are brainy, beautiful, highly reserved and quintessential women. From the moment that they have been campaigning alongside their husbands, their outward looks have changed. They have stepped up their styles in a big way and have started attending functions with their husbands. Even the ones who were more reserved have come out from their shells, storming events in a stylish way. In the next few weeks, we will be serving you those who clothe them, their designers, who do their makeup and how they have evolved in the style department. All of them were beautifully dressed for their inauguration parties and also inauguration proper, which took place last week and they all looked like a billion dollars models that they are. They all complemented their husbands looks as well.

On this list is Dr. Mrs. Ibijoke Sanwo-Olu, the beautiful wife of the Lagos State Governor, Babajide Sanwoolu. Her status has automatically changed. This career woman surely enjoys her husband’s rising profile. Though she is very much on the quiet side and rarely steps out for events, she has been a modest woman many times over and mostly attends events that are work-related, but not anymore. She is now the torch bearer for women in her responsibility as the First Lady. Dr. Ibijoke is not your run off the mill woman. She is highly respected within her social circle. Very intelligent, cerebral and not really in the public glare like her husband except for a few who are her friends, family or colleagues who know her. Dr. Ibijoke has assumed a new leadership role in steering the wheels of the state for women and many are already jubilating that her experience in the health sector would give her the advantage to oversee the health sector in the state. She has been a major force during her husband’s campaign period and that was where she was shot to limelight. Dr. Ibijoke is a renowned medical doctor who sits as the Director at Somolu General Hospital and at Harvey Road Health Centre & Maternity Hospital, Yaba. She has been at the helms of affairs at Somolu for many years. She is one of the many women in the health commission, at level 17 official, who is well loved by all. She has been lauded by many as one of the women who are doing well in her field. Married to her husband for over 25 years and blessed with 4 children, 2 girls and 2 boys, she belongs to the Mountain Of Fire And Miracle Ministry church, MFM. She is a graduate of the University of Lagos and had also attended many well-recognized schools which made her profile intimidating.

Going down to Oyo State is the dark, plumb and beautiful Engineer and wife of Oyo State Governor, Tamunominini Makinde. Her husband, Seyi Makinde is also an engineer. She is a very reserved woman too, if not for her husband’s involvement in politics, she would have faced her engineering works squarely, but anymore, she has become a public figure and there’s no hiding place for her. Oyo State has reckoned with her as the new First Lady. She is from oil-rich Rivers State in South-South Nigeria and she is said to be close to the ex-president Goodluck Jonathan and also coming from a family with a rich pedigree. She was the Director of Protocol for her husband’s Campaign. Engineer Tamunominini is the Managing Director of Makon Engineering, a thriving engineering firm in Ibadan.

She is happily married to her husband for 20 years and there was a massive celebration of the 20 wedding anniversary where they explored the world. The couple always loves to be together that was why they went on a world tour to mark the celebration by touring cities like Geneva, Dubai, Paris, and London where they had fantastic and memorable moments. Sources close to the couple disclosed that the governor is a man who doesn’t joke with his family. He cherishes special events like birthdays, graduations and thanksgivings which he celebrates with his family members. She is highly cerebral and this is testified to by her bagging a ‘Double Honours BBA/MBA (with first class) from the Thomas University, Houston, Texas in the United States of America.

Cute, pretty, brainy are words to describe the new Kwara First Lady, Mrs. Olufolake M. Abdulrazaq who is a staunch corporate woman. She has rich resumes which have made her stands out within the corporate world. She is the Minister/Head of Consular, Education, and Welfare, Nigeria High Commission in London. Part of her outing was when her husband played hosted to elected representatives a few weeks back where she described their action as a step in the right direction for having a people-oriented and inclusive government in Kwara.

She added that her husband is very much ready to be responsible and responsive as plans were on ground to better Kwara and the conditions of Kwarans during her husband’s democratic dispensation. She is also fitting in so well as the First Lady since she has worked both in and out of Nigeria. Mrs Olufolake also comes from a rich pedigree, a prominent Lagos family, Davies family. Her father was the late Hezekiah Olufela Davies, the trained journalist, Prolific writer with well-published books to his credit. She is also a fashionista, who dresses moderately, but knows how to keep in style. She also scores high point in her corporate world, where she holds sway. She loves her corporate outfits like the palms of her hands. One conspicuous thing you will notice on her is her sunglasses, which comes in different classy shapes and colours. She rose to the position of the Minister/Head (Consular Education and Welfare Section, Nigeria High Commission London, a few years ago, she was the Minister/Deputy Head Industry, Trade and Investment, Nigeria High Commission London in 2015. She was the Minister/Deputy Head Immigration and Deputy Director/Minister Commonwealth at the same organisation. She was at a time the Assistant Director, Ministry of Foreign Affairs Abuja Nigeria, Assistant Director, Embassy of Nigeria Paris and Minister Counsellor, Ministry of Foreign Affairs Nigeria. She was at the position of Senior Counsellor at Nigeria High Commission Pretoria, Counsellor at Nigeria High Commission London and Third Secretary at Ministry of Foreign Affairs Lagos Liaison Office.

Even before her major appearance at her husband’s campaign rallies, Ogun First Lady, Bamidele Abiodun nee Osibodu, the pretty wife of Ogun State Governor, Dapo Abiodun, has always been prominent within her corporate space and by extension of her influential background. She is from the prominent Osibodu family. She calls the shot within her space and has no airs around her, despite being a wife of an oil magnate, she is always seen to be on the reserved side. She came to the limelight when she was constantly accompanying her husband to major rallies during the election period. She was known to have been staying in the UK with their children for many years until she came back home. She studied at highbrow schools both in Nigeria and abroad and her style is just as simple as exquisite. She is not loud in dressing and what she wears, you should know, are strictly designers. She has eyes for lovely accessories and mostly you will see her in trousers and English wears until she took on the responsibility of Ogun State First Lady. She fits the status of her husband and both of them are ever stylish if there is any word like that.