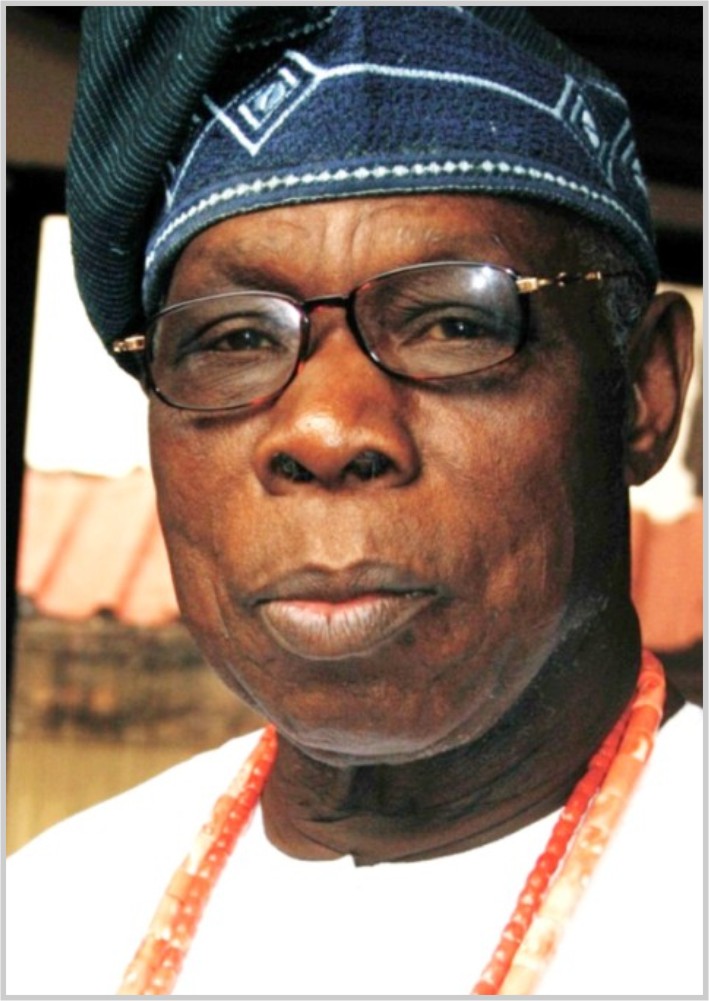 It is no longer news that former President, General Olusegun Obasanjo has publicly endorsed the presidential candidate of the Labour Party, Peter Obi. This open endorsement of Peter Obi by the man many love to call OBJ has elicited very strong reactions from Nigerians far and wde and inadvertently put the Owu strong man in the eye of the storm. For the records, this is not the first time OBJ would be caught in the eye of the storm, many might simply say, but it is perhaps the very first time he would be getting such intense backlash from across the country. Before now, his position on issues rarely gets the polity this heated up. Many, often times, would dsmiss his comments and conclude it wasn’t worth their while. But this time, the former president has touched a very delicate chord with some of the unguarded statements he made, moreso as the presidential election is just a matter of weeks away. But most essentially, he has incurred the wrath of the loyalists of the country’s most revered and talked about presidential candidate, the flag bearer of the APC, Asiwaju Bola Ahmed Tinubu. The Ota Lord has known no rest from the very minute he released his highly controversial letter into the public space and from the look of things, he could remain under fire for a very long while…

Ordinarily, that someone openly declared his support for a candidate should not have been an issue, much less spark off a controversy. It is within everyone’s constitutional rights to declare support for whosoever one chooses. But when that person is no less a personality than the ever controversial Olusegun Obasanjo, then you can be sure it will become an issue, especially when you are throwing shades at a hugely popular personality such as Asiwaju Bola Ahmed Tinubu in one breath and disparaging the president, Muhammadu Buhari, in another.

Not a few have expressed great shock at, not necessarily at the endorsement of Obi by OBJ, but the ruthless manner the latter threw Asiwaju under the bus by making cynical remarks about his age and speculated health status. In his opinion, Tinubu has shown ‘obvious signs’ that his age and ‘health condition’ may not be able to carry the rigours that come with running the affairs of a country like Nigeria with it’s multi layers of complex problems. In the letter supposedly addressed to the Nigerian youths, OBJ also made it clear he didn’t find the least amusing the “Emi lo kan,” mantra, made popular by Asiwaju. He said no one should think they have a sense of entititlement to the presidency and that the youths should discard the declaration and instead say, ‘A wa lo kan,’ meaning it is our turn.

Why this seemingly spiteful comments from the General have shocked many is the fact that, only a few months ago, last year, Asiwaju and his team which included the Speaker of the House of Reperesentatives, Femi Gbajabiamila, former governors of Ogun State, Segun Osoba and Gbenga Daniel and a few other powerful personalities, visited the Ebora as he’s often called at his Ota residence to formally inform him of Tinubu’s intention to run for the presidency. The meeting, which from several reports, went well was also supposed to be some sort of reconciliation of some sort of the two juggernauts. At the time, it looked as though Obasanjo was sincerely pleased with the visit and even appeared to be ready to throw his weright behind Tinubu’s presidential aspiration. But all of that appears to be nothng but an illusion now. The man has no interst in his kinsman, Bola Tinubu. He has picked Peter Obi as his prefered candidate, and all hell has broken lose…

But how did things get this bad between OBJ and Tinubu? Where is the venom directed at Tinubu from OBJ coming from? How come after so many years, since their days as President/Goverrnor, Obasanjo still cannot forgive Tinubu for whatever wrong he thinks the former Lagos State Governor did to him during the days of their well documented frosty relationship? Why would he, as an ex president who has had his time, get involved in the politicking going on between the presidential aspirants and then pitch his tent with one of them, claiming he is the best of the lot? Well, City People can proffer some of the answers to these questions and why OBJ finds it difficult to ‘forgive’ Tinubu for daring to go confrontational with him.

First, as Lagos State Governor, Tinubu was the only governor who dared to confront Obasanjo when he held sway as presidernt. Typical of OBJ, he intimidated everyone in his government, it didn’t matter if you were a state governor, you had to fall in line. But not Tinubu. When Tinubu created additional 37 LCDAs in Lagos, Obasanjo witheld the state’s allocations for two years. Some other states too toed Tinubu’s steps and also created additional council areas. But when their state allocations were seizewd by Obasnjo, they promptly reverted to statusquo. But Tinubu was not intimidated by the Owu Lord who was crushing everything and everyone in his path. He took the federal government to court and won the case. As it is typcal of OBJ to show utmost disregard for the rule of Law, he refused to release the witheld allocations. It was late Yar’Adua who eventually released the funds to Lagos State.

This was not the only time Tinubu took OBJ to court. There were severl other cases and Tinubu won 13 landmark cases, including the aforementioned case, against the federal government. No other governor, nobody else could have achieved this except Bola Tinubu. Knowing the kind of person OBJ is, this long list of victories achieved by Asiwaju must’ve hurt him to the marrows but he kept a straight face through it all, still hoping he would have his own pound of flesh someday. He never got it.

Asiwaju Bola Ahmed Tinubu also proved his mettle in 2003 by emerging the only AD governor to survive the Obasanjo Tsunami that swept away all the other five AD governors. Using all the federal might at his disposal, OBJ outrigged all the other Yoruba governors, leaving Tinubu as the ‘last man standing.’ And after he left office, Tinubu got together a team of some of the brightest lawyers in the country and charged them to go to the court and win back the stolen mandates of the states that were rigged out during the election by OBJ. Tinubu was triumphant again, he spearheaded the court victories of states like Edo, Osun and Ekiti. There is no way his could’ve gone down well with OBJ. He must’ve hated Tinubu even more.

Many do not know that OBJ had secretly nursed a desire to remain the only Nigerian to have been president of Nigeria first as a military head of state and then as a democratically elected president. When in 2015 Tinubu collapsed his political platform ACN with Buhari’s CPC and formed APC and Buhari emerged the presidential candidate, many thought it was misadventure considering that Muhammadu Buhari had actually contested for presidency three times and failed. Indeed, it was Tinubu who went to Daura to seek out the former military leader and persuaded him to contest one last time. And the rest, like they say, is history. President Buhari will be leaving office by next year after serving two full terms. At the time, Obasanjo did not find this amuing. He wished and prayed Buhari did not get the APC ticket but he did. Then he did everything within his power to ensure Jonathan won the election but it all came to nothing. Buhari won. Tinubu triumphed, yet again.

If truth be told, Tinubu has been a torn in Obasanjo’s flesh. His courage, resilience, stubborness, fearlessness, have all in some ways earned him OBJ’s respect even if the old horse will not admit so. Back in 2015 when Obasanjo clocked 75, Tinubu was at his birthday and the intensity of their rivalry came to the fore when Asiwaju was called upon to speak about the celebrant. It was at the occasion that Tinubu openly acknowleged that there were indeed alterctions between him and the former president when they were both in government.

“Yes, it is true, there are no permanent friends or permanent enemies in politics,” he said. “What is common is common interest. Once upon a time, some nine years ago, I went to the (Aso Rock) Villa, the President, Olusegun Obasanjo, asked me to walk out and was just abusing me in the papers and I said, “Baba, you are a tenant here. This house belongs to Nigeria. If I get to Ota, you can send me out. I brought file about Nigeria.”

* But Asiwaju back then, being the ever humble personality that he is, said despite their less-than friendly past, Obasanjo was still worthy of celebration.

“If I could tell you several events that occurred between the two of us in the interest of the nation, I would write an epistle but today is not for that,” Tinubu said. “But how do you celebrate truly and honour a man who has kept you on your toes? Between Baba Olusegun Obasanjo and myself, what I can say is gratitude from me because you kept me on my toes.

“Each time we disagree on things of principle, I took him to court. One time, as the President, he saw me and said, “You took me to court. We can’t be friends after the court.” And I told him, “I didn’t take you to court, I took the Nigeria President to court.” And he said, “Get out of my way” and I told him, I wouldn’t get out of the way until I get what I want.”

Clearly, despite all of his hostilities and animosity, Asiwaju Bola Ahmed Tinubu has never been intimidated by Obasanjo. He always stood his ground and made it clear that he was not one to shy away from a fight, no matter the personality involved. And if you want to become public enemy number one to OBJ, go confrontational with him even within the context of the constitution and see the venomous side of him.

The backlash OBJ has been getting following his endorsement of Peter Obi has continued unabated. Some say he has bitten more than he can chew this time, picking on Asiwaju Bola Ahmed Tinubu, a man whose profile has risen incredibly high within the past few months. One nthing is certain though, until the election is held and concluded, OBJ will remain under fire for spiting Asiwaju and trying to strip him naked before the Nigerian public.

The Best Food For Your Age Revealed!

Why I Have Not Retired From Active Business @ 89

Why You Must Be Careful About The...