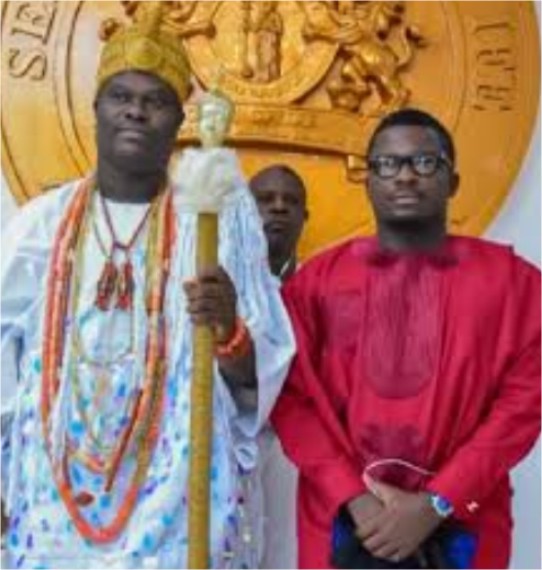 His Imperial Majesty, Oba Adeyeye Ogunwusi, the Ooni of Ile-Ife, was a big real estate player before he became King. Even as a sitting King, he is still into real estate. And he is adored by many younger real estate players. There are a number of real estate players who have chosen him as their godfather. Ooni represents a father figure to many of them. In fact, Ooni is the Chairman of these people’s real estate companies.

These realtors’ choice was based on the fact that, that Oba was very active in the sector before he went on to become Ooni of Ife, a few years ago. He has built housing estates, especially in Lekki/Ajah axis, but he remains the Chairman of Gran Imperio Group.

In this piece, we shall unveil those real estate players who are successful but regard Ooni as their godfather. These people frequently visit Ooni at the palace in his Ile-Ife to pay homage and some of them have been honoured with chieftaincy titles. Read below as we bring to you some of the names.

The first on our list is a woman. She’s a woman who has done much in the real estate sector. This woman is the Erelu Atunluse of Erinmoland, Erinmo-Ijesa land, Osun State. Her name is Dr Becky Olubukola. She’s the Managing Director of Bstan Group while Ooni of Ife is the Chairman of the company.

Dr. Becky is one of the tycoons in real estate and she plays very big in Abuja and the environs. Recently, she has also extended her operation to Lagos.

Let’s tell you more about her and the firm.

Dr Becky graduated as a Civil Engineer from the prestigious University of Benin with an MBA in Estate Management and Construction. She recently bagged a Ph.D. in Civil Engineering, Housing and Estate Management. She’s an accomplished serial entrepreneur with many successful businesses to show for it. She’s a mogul in every sense of the word, as she runs one of the biggest conglomerates in Nigeria. She’s huge on giving back to society through every channel possible. She has done much both on-record and off-record when it comes to reaching out to people.

She holds Ooni of Ife in high esteem and she always refers to Ooni as her father and father figure of the company.

What about Hon. Kehinde Alex Bankole, who is the founder of KAB Construction Limited? The company has been one of the most active in the last few months. Hon. Kehinde Bankole and Ooni of Ife are like 5 and 6! They are like Siamese twins.

Ooni is not just a Chairman of his company (KAB), he’s like a demi-god to him. For those who are close to Hon. Bankole, they know how close and inseparable they are. It is almost impossible for these two men to stay apart for hours without communicating with each other. These two talk on the phone almost every hour of the day.

In fact, in the coming weeks, Ooni would be welcomed to Hon. Bankole’s new housing estate in Lekki called Lekki Court.

Kehinde Alex Bankole, a business magnate, with vast experience in Construction and Real Estate Management steered the wheels of the Lekki Court Estate for several years that has today matured into a billion naira diversified industry.

He is an indigene of Ekan Meje, Oke-Ero Local Government Area of Kwara State, born into the family of Otunba James Bankole, an automobile businessman, and a fabric businesswoman.

Mr. Olawale Ayilara is the MD/CEO, LandWey Investment. He is a good ‘son’ of Ooni of Ife and that’s what he’s frequently called by his godfather, Ooni’s of Ife. He also visits Ooni palace to pay homage. Mr. Olawale is in his 30s. When Ooni of Ife was at the last Real Estate Developers Association of Nigeria, Ooni made it known that Mr. Olawale was his son.

Olawale Ayilara is a passionate entrepreneur with over 10 years of experience, starting and running businesses in the South-West of Nigeria, handling transactions worth $200 million.

He is a recipient of the Forbes Africa 30 under 30 recognition.

Before founding LandWey, he worked as Head, Business Development, Creativity and Strategy at Eagles Insight and Innovations and Co-founded Nigerian Property Investments Group; a real estate platform for Nigerians in the diaspora. He’s won several awards and accolades in Nigeria and abroad.

Aare, Ade Leke Adebesin is the MD/CEO, Kings Intercontinental Homes and Properties. He’s one of the players in that sector, who hold Ooni of Ife in high esteem. He’s always physically close to Ooni of Ife. They have done a lot of things together, especially in real estate. You can’t mention about 10 guys who are close to Ooni and he would not be in the top 3.

Adebesin’s firm head office is on Awolowo Way, Ikeja, Lagos. He started the business 7 years ago, after his 21 years of experience at Coca-Cola Bottling Company as an Engineer. It was at Coca-Cola that he developed a love for real estate.

Now, he has many parcels of land all over Lagos and outside Lagos.

Sijibomi Ogundele is the MD/CEO, Sujimoto. This is one of the guys, who look at Ooni of Ife with awe. This is one guy who visits the palace frequently for royal blessing and advice. Sujimoto is the brain behind most luxury housing estates in the highbrow areas of Lagos.

I Was Once A Bus Conductor In...