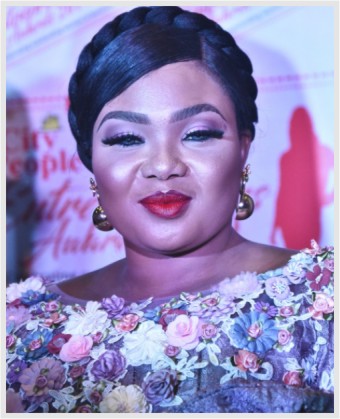 The whole of Lekki stood still on September 29th, 2019 as many top entrepreneurs stepped out for the 2nd Edition of City People Female Entrepreneurs Award 2019. Lekki Coliseum Event Centre witnessed a huge turnout of top celebrities and business moguls from different parts of the country. Many celeb babes flew in from the U.S. and U.K. to pick awards. The event wasn’t just loaded, it was filled with many important personalities and top celebrities who are making waves in their businesses.

We couldn’t help but notice how they all dazzled at the event. They were gorgeously dressed in different luxury outfits and they also complemented it with a nice collection of jewellery. Everything about these babes speaks volume of class and they made heads turn at the event. To start the list is one of the most sought after designers, Toyin Lawani, we can also describe her as a fashion icon, and a business mogul because she is into many successful businesses. Toyin Lawani is not called a serial entrepreneur for anything as she has a lot of businesses in her empire which is called Tiannah’s Place Empire. She won the Most Enterprising brand in Lagos. She wore one of her luxury collections and she made many heads turn 360 degrees.

What about ever-gorgeous Emmanuella Aderopo the CEO of Party Dreams? She stole the show at the event, many were not surprised to see her looking so beautiful because she is known to be a lover of fashion. She always looks good at any function she attends but she looked extremely gorgeous at the 2nd Edition of City People Female Entrepreneurs Award and she also won the Kiddies Souvenir Company of the Year.

Let us also add that she runs a very big Kiddies store in Lagos known as Party Dreams Ltd. Another reason that made her stand out at the event is her beautiful and flawless skin. What about her perfect body shape? It made her dress fit her perfectly. Tosin Osinowo is also another big entrepreneur that stole the show at the event. She dazzled in a beautiful black dress, despite the fact that she wasn’t wearing heavy make-up, she still looked beautiful as always. A lot of guests couldn’t help but admire her.

This beautiful celeb babe is the CEO of one of the most sought after Amala joint in Lagos, popularly known as Ile Alamala. She won the Most Promising Amala Vendor Award.

Jadesola Abiodun Odumosu popularly known as Jadesh Skincare was the centre of attraction at the event.

Jadesh is one of the best skin therapists that is currently making waves in the skincare industry. Her brand is quite new but she has proven to be one of the best. Beautiful and flawless Jadesola is a perfect example of what she does, one reason why people couldn’t help but admire her is her beautiful, spotless and glowing skin.

We should also add that, she is blessed with lovely body shape.

Kikelomo Onipede CEO Kicksplace Fashion Company also dazzled at the event. She owns one of the biggest kaftan and boubou brands and she is the choice of many celebrities. She was awarded the unique Kaftan Designer of the Year.

Golditeventsolution is also a top event planner in Lagos that made heads turn, her lovely sequence dress made her dazzle all through the event.

She won the Most Promising Event Planner of the Year.

We can’t help but mention how the CEO of Kreative Cocktail rocked the event. She was awarded the Outstanding Cocktails Brand of the Year.

Her dress was fully embellished with crystal stores, beads and other beautifying elements. You can’t help but notice her beautiful dress. And she also won the Queen of Blings Award.

One of the most stylish fabric merchants in Lagos is Nicky Covering.

Her love for fashion is second to none. She was Awarded Young Stylish Fabric Merchant of the Year. Did we mention Heiresscouture Nigeria? This beautiful chocolate goddess can also be described as the Queen of Style. Her real name is Kemi Goodey and she is one of the top designers in Lagos. The list cannot be complete without the Supreme Empire, she is the most sought after gold merchant in the USA. She flew in from the U.S. for the award and she left no stone unturned to look beautiful for the event. She rocked one of her timeless 18carat gold collection to the event and she stole the show. She won the Most Sought After Gold Merchant in the USA.

T Shakky is also not left out, she is one of the young and talented make-up artists in Lagos. She enjoys the patronage of many Lagos celeb babes because she is very good at what she does. She won the Most Sought After Party Make-Up Artist of the Year. Pretty and flawless Abishine Jewellery also made the list. She sells unique 18carat gold plated jewellery. She was awarded Unique Jewelry Accessories of the Year. Who doesn’t know Bisola Yusuf? The CEO of Beesol Luxury Place. She is one of the top Lagos Skincare Therapists. She was awarded Outstanding Body Cream of the Year.

The men were also not left out, Hair by Sleame needs little or no introduction when it comes to celebrity hairstyling, he got an award as the Creative Male Hair Stylist of the Year. What about Tobbies Touch? He left many guests in awe when he stormed the event with his unique outfit. He won the Most Sought After Bridal Hair Stylist of the Year Award. Celebrity Aso-Oke Designer, Bimbo Ipaye popularly known as Bimms24 on Instagram stole the show with her unique Aso-Oke Collections. She won the Celebrity Aso-Oke Designer of the Year Award.

Twenty-sixth Stitches is one designer that doesn’t follow the crowd. Her designs are always different and unique. She was awarded Hottest New Designer of the Year. The fabulous outfit also dazzled in one of her Senegalese collections, she won the Most Sought After Senegalese Brand in Ibadan. We cannot but mention the beautiful CEO of House of Phreeda Skincare. She is one of the Most Sought After Skin Therapists in Lagos. She stormed the event with her friends and they all looked stunning. She was awarded the Spa of the Year.