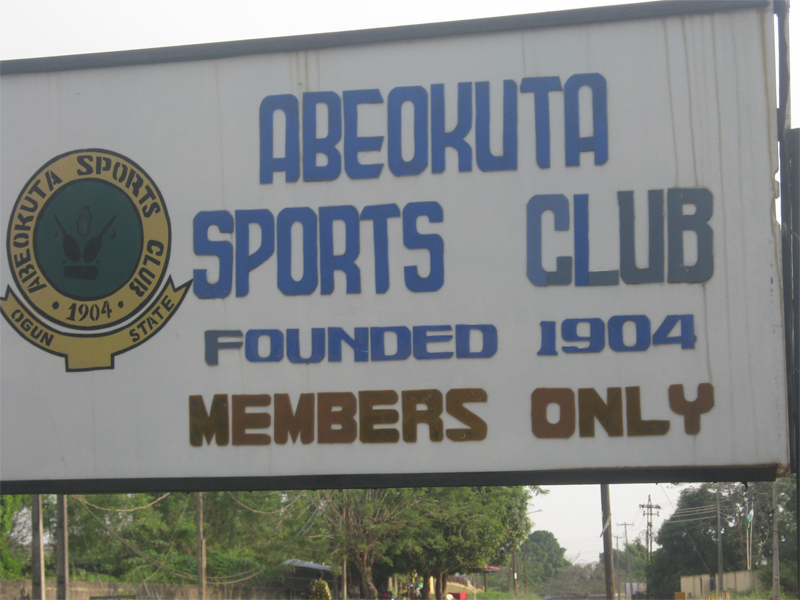 Takes Over From Engr. MUTIU ADEBOWALE

How He Plans To Run ABEOKUTA’S No 1 Club

Akin Ajayi is a socialite, a distinguished sportsman and an erudite scholar. He is also a successful activist, a seasoned administrator and a Club man to the core.

His sterling leadership qualities and excellent innovative ideas earned him the confidence, support and acceptance of the members of the Club as a whole when he was serving as the Mayor of Moonlight Section. He was also a one time Welfare Officer, Moonlight Section and also the Secretary of the, Moonlight Section. During the expansion of the section, he constructed the Bayo Adesina’s Pavillion  alongside the provision of televisions and Tiling of the huts.

He was born on the 18th of August 1959 to the family of Pa Theophilus Akiyemi and Chief Mrs Clara Omolara Ajayi.

He attended St. Gregory’s Catholic Primary School, Ovirhi Agbarho, Delta State.  He proceeded to Ibadan Boys High School, Oke-Bola in Ibadan for his secondary school education.  There, his outstanding performance in the first year earned him  the Western State Scholarship. On creation of states in 1976, Ogun State government took over the responsibilities of funding the scholarship. He ended his Secondary School education with top grades and went on to The Polytechnic Ibadan for his Advanced Level programme.  On completion of the programme, he was admitted into the prestigious Ivory Tower, University of Lagos for a honours degree in Physics.  He later attended the University of Ilorin where he was awarded a Master’s degree in Physics in 1994.

In 1983, Akin was posted to Ogun State Polytechnic for his National Youth Service Corp programme. Recognizing his potentials for research, he was offered employment as an Assistant Lecturer in 1985.  There he rose through the ranks and became a Chief Lecturer in 2013. The uprightness, brilliance, humility and competence that he demonstrated in discharging his duties did not go unnoticed.  These qualities earned him several appointments in the institution among which are.

General Manager of Moshood Abiola Integrated Services (MAPINSCO) Ltd. He is also a member of the 10th Governing Council, member of the Academic Board,

member of the Appointments, Promotion and Disciplinary Committee. He is chairman of Ceremonies and Social Committee, Chairman of Transportation Management Committee, Director of School of Science and Technology. Head of Pre-ND Programme

Akin has from his childhood, being an embodiment of passion, humanness and comradeship.  His passion for equity, justice, fair play and observation of human right is unparalleled.  This led him to join the Academic Staff Union of Polytechnic (ASUP) in1985 as an active member.  Within few years, he was elected as Chairman of the Union, a position which he held successfully for three years.  He was later elected as Publicity Secretary of the National body of ASUP, a post that made him traverse the length and breadth of Nigeria and relate with influential personalities in government.

Akin Ajayi is a socialite, He has over the years ensured that his ambition for career progression and success in union struggles do not subdue his passion for leisure.  In the Polytechnic where he works, he encourages officers to pursue career excellence but at the same time, create space for recreation.  In appreciation of his efforts at rejuvenating the social life on Polytechnic campus, he was elected President of the Senior Staff Club, MAPOLY.

In his quest for recreation and pleasure among responsible socialites, he joined Abeokuta Sports Club about 13 years ago, having Club no. 1528.  Since then, he has shown passion and commitment to all round sports development, growth of the Club and enhancement of its public image.  He is a member of Moonlight Section, Tennis Section, Darts Section, Table-Tennis Section and Keep-Fit Section.

He  is happily married to Omolara and their marriage is blessed with beautiful children.

What sort of a club is Abeokuta Sports Club? In Abeokuta, the capital of Ogun State, it is the No1 club where all the big names from the old to the young in the state hangout. It is the pre eminent club where you would find politicians, businessmen, technocrats, professionals of all hues, retirees, of public and private sectors.

There are female members too, just as you have male. And as you drive into the expansive premises of the club at Ibara, you will see how lively and bubbly the club is. Every evening, members retire to the club to have a drink, indulge in some recreational activities or just sit out and exchange ideas and opinions with fellow members at any of the  sections of the club.

Usually, there is a healthy competition among the sections, which include Darts Section, Scrable Section, Ayo, Draught, Squash, and Table Tennis. There is also the Basilica Section, where you have the Pope and Cardinals.

The Billiards & Snooker section, Almond Tree section, Keep Fit section and a host of others, each with a Captain.  One striking thing about Abeokuta Sports Club is its rich history and the generational experience it has to draw from.

Many people don’t know that this club is more than a 100 years old. It was set up in 1904 by expatriates, before more and more blacks began to join and play active was in the club.

That inception of the club was very significant in the history of the ancient town. City People can authoritatively reveal that  1904 was an important year in the history of Abeokuta. A number of never-to-be forgotten events took place that it would be difficult to know exactly which one coincided with the establishment of Apeokuta Sports Club in 1904. The founders of the Club, who were mainly expatriates, would never play with their leisure because they believe generally that one should work hard and play as well.

We know from history that in 1904, the Osile, Oke-Ona,  Oba David Sokunbi Karunwi II, was crowned on Monday, 4th April, 1904,  by Bishop Oluwole. It is also on record that the first Alake to visit England was Oba Gbadebo I in the time frame too.

When we go by official gazette, it was in 1904 that the Egba united Government started issuing out its official gazette and also established its police and prisons headed by European. Finally 1904 also saw the inauguration of the Native Court and mixed Court for hearing cases, involving non-indigenes of Abeokuta.

That Abeokuta Sports Club was founded in 1904 was not in doubt because the research shows that the Governor of the Gold Coast’s (now Ghana) visit to the Club” made it as a meeting point of relaxation for members of the West African Command Headquarters. The place was also a rendezvous the elite in the town.

Soon after, a Golf Course was established and later Cricket Pi , Tennis Courts and Billiards Room were established on the Club premises and some of the games are still in place today. The sporting activities of the Club developed to a high standard which enabled the Club to win many Trophies in the country and outside the country. This Club is reputed to be the oldest on the West Coast of Africa. Document available shows that the land on which it now stands was leased to the club on the 23rd March, 1932. There are also sporting records dating back to 1929. The Club had been actively involved in the games of Golf, Shooting, Cricket, Football, Motor Car Racing, Tennis, Billiards and Snooker in the early 30’s. There is a proof to show competitions between the club  and other rather old and defunct clubs in the  country. Among them the annual Cricket fixtures with the Lagos Cricket Club, Dyaks Lagos, African Cricket Club, Kings College Lagos, Saint Gregory’s College and Ibadan Recreation Club. In the evenings films, hired from the Nigerian Motion Pictures Ltd. The American Otion Picture Ltd., The British Council and the United States Information Service were shown. The Club had its Cinematography projector and screen. There were formal monthly Guest.nights where guests of members were  entertained by a live band in attendance and the  dress code observed.  Arrangement was also made with some clubs whose members could enjoy the facilities of the Club when they were in town and whose facilities members could use when they travelled out. Examples were: Ibadan Recreation Club, Ibadan Tennis Club, Apapa Club, and the Army Mess. Modalities which were renewable annually were worked out. Token fees were usually paid. The arrangement is still in force. The early 60’s saw more active roles being played by Nigerians in the administration of the club. As many Nigerians held offices in the past, the first Nigerian President of the  Club was the Late Dr. A. Okuboyejo followed by Dr. A. Asuni, Chief Bayo Sosan, Chief Tunji Fadairo,Engineer V.O.A. Ajayi, Engineer Kunle Marinho, Dr. AkinMajekodunmi, Hon. Justice Olufemi Odunlami, the late Chief Oluremi Akinsola, Chief Alfred Popoola, the late  Chief Adebisi Macgregor, Chief Abayomi  Ademefun, Justice Demola Bakare (Sole  Administrator), Alakoso Adebayo Adeyemi,  Kabiyesi Samusideen Ayorinde, Alhaji , Ganiyu Egbeyemi, the late Chief Soniran  Sowemimo JP, Chief Ogo-Oluwa Bankole,  Chief Oladipupo Odulate, Professor  Olasunbo Martins, the late Chief Olanrewaju  Sobayo, Mr. Kunle Okikiola, Otunba Lekan  Lukan, Chief Olaniyi Adegbenro, Engr. Taiwo Fatoki and the current President, Engr. Mutiu Adebowale.

The Club has equally inaugurated a Board of Trustees. Members are: Oba ~ Abidoun, Oniru of Iruland, Deacon Tunde Otunuga, Prof. Sunmbo Martins, Dr. Bunmi Sanyaolu and Justice Dehinde Shoremi. From inception on till today, the Club has served and is still serving as a stress-relief place for the young executives, the old and the retired.

WHY IT’S HARD TO GET A DIVORCE IN CATHOLIC CHURCH