Abiru @ 57: Special Tribute To A Refined Professional In Politics 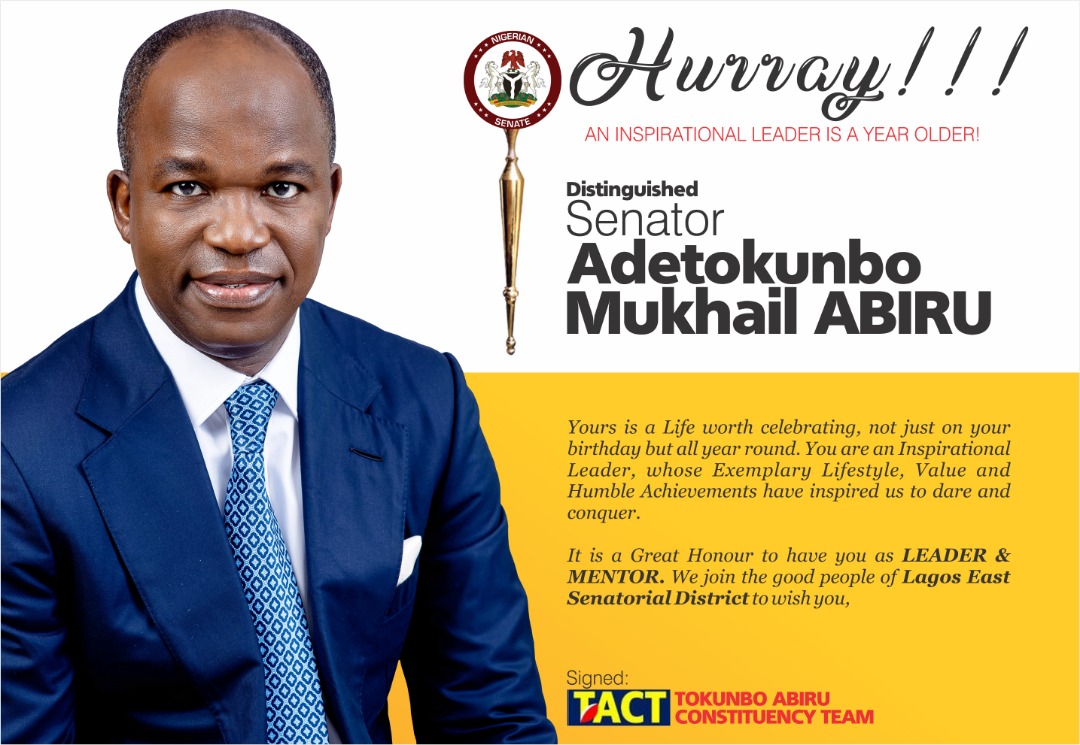 He was an influential bank chief before he was beckoned to represent the people of Lagos East Senatorial District in the National Assembly.

Distinguished Senator Mukhail Adetokunbo Abiru, FCA , an astute financial expert had previously served as Lagos Commissioner of Finance, under BRF. He successfully floated an N80 billion bond for the government.

Buoyed by his excellence as a banker of record, Abiru came on stream with a clear mission to make a marked difference in the lives of the teeming constituents of Lagos East.

A famous phrase of a former New York Governor, Mario Cuomo which says politicians ‘Campaign in Poetry,But Govern In Prose’. In the case of Abiru, he campaigned in poetry and the delivery of his campaign promises have been poetic so far.

He hit the campaign train in the thick of COVID-19 pandemic in 2020. If elected, Abiru promised to ameliorate the pang of the pandemic on the poorest of the poor in the constituency.

Pronto, he got to work as soon as he was inaugurated on the floor of the Senate chamber as a Senator of the Federal Republic on 15th December, 2020. He reached out to the leadership of critical stakeholders in the Senatorial District to draw up a list of beneficiaries for Tokunbo Abiru COVID-19 Financial Assistance Scheme.

True to his words, on Monday, 8th February, 2021, Senator Abiru credited the bank accounts of 1,000 vulnerable who are widows, physically challenged people, aged, women and unemployed youth drawn from 98 wards across 16 local government areas in the district.

In compliance with COVID-19 safety protocols, selected beneficiaries got direct credit to their respective bank accounts.

Despite coming in late, Senator Abiru knocked on relevant doors in Abuja for Artisans and Transporters in Lagos East to benefit from Federal Government Survival Funds for Small Scale And Medium Business Owners. 370 beneficiaries who were captured under the scheme had got the first tranche of N30,000.

No doubt, the people of Lagos East Senatorial District are in for the best times. They have as a Senator, a man who is goal-driven and result-oriented. Both at the plenary and the constituency, Senator Abiru is equally active.

It is a new dawn in Lagos East Senatorial District! Happy Birthday Sir.

Abiru @ 57: Special Tribute To A Refined Professional In Politics was last modified: March 25th, 2021 by Reporter