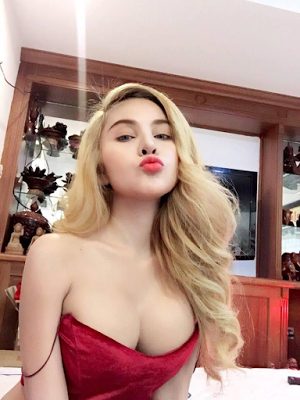 Popular Cambodian actress, Denny Kwan, has been banned from working in the entertainment industry for a year, over her Facebook posts that were deemed too raunchy. The 24-year-old actress who has starred in several movies and music videos was banned by the Ministry of Culture and Fine Arts’ disciplinary council for failing to keep a written promise to dress in a less sexy way.

In a statement released through The Phnom Penh Post, the chief of the disciplinary council, Chamroeun Vantha, said that the council members decided to punish Denny Kwan by not allowing her to take part in any activities in the entertainment industry for one year, such as filming, karaoke and singing performances on TV after she violated the code of conduct of artists in the country.

Responding to the ban, Kwan accepted the one-year ban and promise to be less hot.

‘I know it’s my right to [dress how I want], but our culture, Cambodian people, cannot accept it,” she said. “I will try not to be [as] hot as I usually am when I post on Facebook.’

According to the rules for girls in Cambodia, women showing their body part is deemed shameful. Absurd Story Of An Actress Who Was Banned From Featuring In Movies For Being Too Sexy {Photos} was last modified: April 28th, 2017 by Arinze Ago