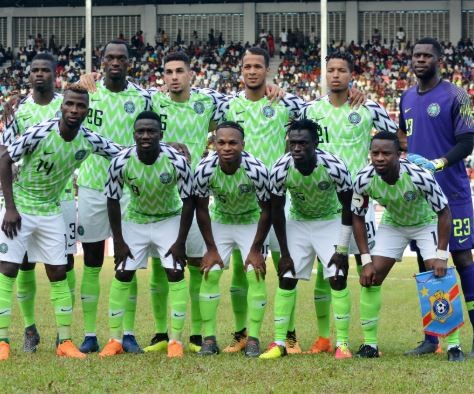 Fears that the Super Eagles of Nigeria may find it difficult to raise a strong side in their 2019 Africa Cup of Nations opener against the Swallows of Burundi on Saturday in Alexandria has been dismissed.

An inside source revealed that all the ten players that were reportedly ravaged by an ‘unknown sickness’, are not as serious as initially feared and have been training with the Players with the video of their sessions on the pitch posted on the Twitter handle of the Nigeria Football Federation ( NFF).

It later emerged that the players came down with cold, cough and flu as a result of playing under torrential rain in their friendly match against the Warriors of Zimbabwe penultimate Saturday at the Stephen Keshi Stadium in Asaba, Delta State.

Our source revealed that the team’s medical crew led by Dr Ibrahim rose to the occasion by treating all the players and officials who were sick, pointing out that there was never a time a virus ravaged the players.

The players have been involved in rigorous training sessions since they arrived at the Helnan Palestine Hotel last Sunday from Ismailia, where they camped for one week.

“There is really no cause for alarm because everything is okay in the camp of the Super Eagles.

“The players and almost all the officials had a cold after the friendly match against Zimbabwe which is not unexpected. They all got prompt medical attention and returned to training immediately. “The source disclosed.

Last Monday, the panic button was pressed across the country following reports that not less than 10 players have been ravaged by an unknown sickness.

The sickness was initially attributed to the Air-conditioning system of the hotel the Eagles lodged in Ismailia but with all the players training yesterday, there is hope that Rohr would not field a depleted Nigerian squad against debutants, Burundi on Saturday.

READ ALSO: OBASANJO LIED, HE WAS INVITED TO MAY 29, JUNE 12 CELEBRATIONS – GARBA SHEHU

AFCON 2019: Super Eagles Will Do Well Despite Feared Ailment – Inside Source was last modified: June 20th, 2019 by Damilare Salami