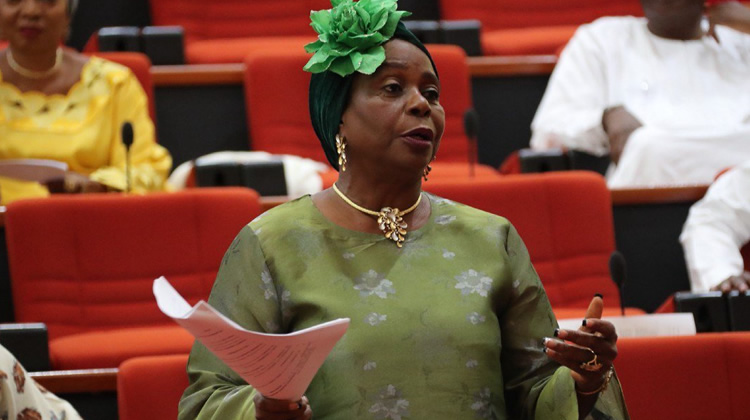 The Clerk of the Senate, Nelson Ayewoh, on Thursday, administered the Oath of Office and Oath of Allegiance on Senator Biodun Olujimi to represent Ekiti South Senatorial District.

The swearing-in of Olujimi followed the directive of the President of the Senate, Ahmad Lawan.

The Court of Appeal in Akure had on November 6 nullified the victory of Senator Adedayo Adeyeye and declared Olujimi, of the Peoples Democratic Party (PDP) winner of the Ekiti South Senatorial election conducted on February 23, 2019.

Lawan congratulated and welcomed Senator Olujimi who was a Minority Leader in the Eight Senate back to the Upper Chamber.

“I want to congratulate and welcome Senator Biodun Christine Olujimi, the former Minority Leader in the Eight Senate back to the Senate.

“With her swearing-in this morning, we now have eight very solid female senators in the ninth Senate.

“We pray that this addition will bring more productivity and stability in the ninth Senate.

“We hope that it will also bring unity and more focus for us to do only those things that will bring development, peace and progress to Nigeria,” Lawan said.

With the return of Senator Olujimi, PDP now has 45 Senators in the Senate while the All Progressives Congress (APC) and the Young Progressives Party (YPP) have 63 and one Senators respectively.