Home News ALAAFIN OROMPOTONIYUN, THE FIRST AND ONLY FEMALE KING OF OYO
News

ALAAFIN OROMPOTONIYUN, THE FIRST AND ONLY FEMALE KING OF OYO 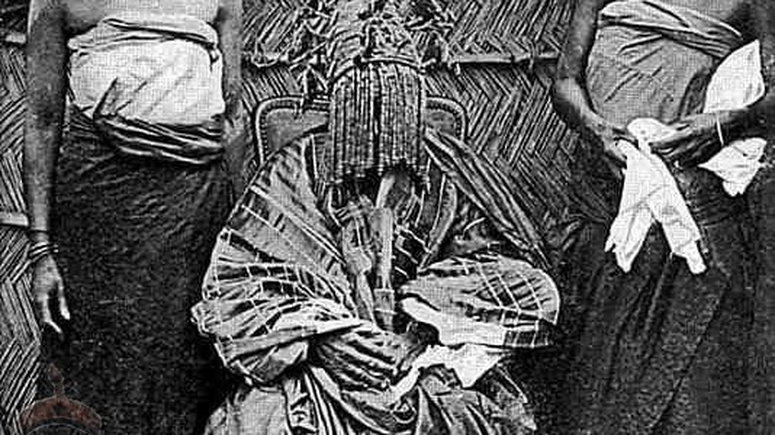 Alaafin Ajiun Orompotoniyun was the first and only female Alaafin (King) of Oyo. She ruled Oyo Empire from 1550 to 1562. Known as Orompoto, she was the sister of King Egungunoju who died without a mature male child to be enthroned king. And to prevent the crown moving away from her kindred, Orompoto magically changed to a man and became king.

Alaafin Orompotoniyun of Oyo Empire in Nigeria! Ajiun, ar’obo s’ete, oba olore n la, oba olore kanya-kanya (King Orompotoniyun, Ajiun the custodian of the vagina that kills evil plots. the king with the great gift, the king with the flabbergasting gift). Orompotoniyun was indeed a king like no other. He was the first person on earth that performed a successful transgender surgical operation complete with Phalloplasty (construction of a penis), mastectomy (removal of the breasts), chest reconstruction (the shaping of a male-contoured chest), and scrotoplasty (using the labia majora, popularly called vulva, to form a scrotum ). This, he did in faraway circa 1550, about 400 years before the white man could even think about it. Come along, let me tell you what happened.

Alaafin Ofinran, after the demise of his father (Alaafin Onigbogi), and living in a strange land (Bariba land), decided to collect his people together and set out for their return to Oyo where he and his subjects can live in dignity. Alaafin Ofinran proceeded on the journey with prince Eguguoju, princess Orompotoniyun and prince Ajiboyede. One of the king’s wives was pregnant with a foetus. The little prince was born during the trip. He was named Tella Abiipa.

While the procession was on its way to Oyo, many great events occurred, anyways, the Alaafin Ofinran died on the way to Oyo and his son prince Eguguoju became the Alaafin. Alaafin Ofinran’s body was wrapped in an ass’s skin to be taken to Oyo for burial. When the procession got to a place called Okutu-gbogbo, the chord that was used to wrap the king broke and the body had to be bound up afresh. The exact point where the chord broke is where the Shaki palace was built. The oracle was consulted and the Oyo people were informed about the sign they would see that would make them know where to stop. They saw this sign at Igboho (even the name of the town Igboho), is from the sign they saw. So the people of Oyo settled in Oyo-Igboho. It was at Igboho that Eguguoju’s father, Alaafin Ofinran was buried. Egugoju also died after sometime and he was also buried in Igboho.

With the demise of prince Eguguoju, the next prince was prince Ajiboyede but he was still a young boy, too young to become a king. Of course, prince Tella (that was born on the way) was a toddler, so he was not even in consideration. The only other person who had a blood line to the Alaafin dynasty was the princess Orompotoniyun. But God forbid that a lady would become an alaafin to rule over men. obinrin at’eyin to! (A specie who urinates from the rear!), ka ma ri! Tufiakwa! God Forbid! So, some of the oyomesis (council in chief) members started plotting on how they would install themselves as king thereby introducing their own lineage into the Alaafin line.

Orompotoniyun, who was first enthroned as a regent, got wind of the plans by some of the Oyomesi, and she was not going to let such sacriledge happen, she was determined to protect her family name at all cost. She was going to protect the royal blood from being corrupted. She was determined to defend what belonged to her family by right, by history and by divine providence.

Now, if you remember, Orompoto was with her father during the war that caused them to move to the bariba land and she learnt about “strategy of survival”. She was with her father when he organised moving them from Bariba land back to Oyo, she learnt “planning to progress”. She was with her father when they proceeded on the trip, thereby learning “execution of strategy after planning”. Orompoto was with her brother when he finally brought them to Igboho, it means she learnt “finishing”. She was extremely very well blended in conceptualization of strategy and its execution to a logical conclusion. Above all, she was a princess of an Alaafin, – Death the father, Death the mother, second in command only to the gods. The child of death, that can’t be killed (Omo iku ti iku o le pa). The offspring of diseases, that can’t be afflicted by diseases (omo arun, ti arun o le se). The scion of disaster whom can not experience disaster (Omo ofo ti o le se ofo). Alaafin the one who threads on his kingdom with benevolence but marches on rebelious others’ with anhilating destruction (Alaafin ti n f’ese ire te ojude ti e, ti n f’ese ika te ti omo olomo). Alaafin the great, who seeks whom to fight, because all and sundry cower at his great might and there exist none to engage him, he looks invitingly at the wall for a chance just to engage in a fight (Ko ri eni ba ja, o n wo ogiri rako-rako). Kaabiyesi oooo. This is the kind of lineage from whence Orompotoniyun comes from, and the treacherous plotters think she would hand over her family rights just like that without a fight? They must be kidding!

Orompotoniyun summoned the chiefs and told them in clear terms that they should start preparing for her coronation. “oti o” was the general response. “It can’t happen, we won’t have a king who would urinate from the rear. Mba! Ko jor mehn”. Even the chiefs who were not part of the treacherous plans to usurp the Alaafin’s blood line couldn’t support Orompotoniyun. having a female king is just a No-No! So Orompoto asked them all, “what if i show you proof that i am a man and not a woman, would that satisfy you?”. “What sort of question is this”, they responded, “princess, is all well with you?”. At this point the treacherous chiefs (awon olote) decided it would be a good idea to even ridicule her with her own offer. So they told her, “we would make you king if you can show proof that you are a man. However, the only acceptable proof to us would be to see you stark naked”. You know what, Orompotoniyun agreed to the deal. She said they should meet at the palace in 7 days time for the proof or otherwise.

From the day of the meeting, Orompotoniyun started wearing male clothings. Buba and Sokoto with cap. Go ask any transgender doctor today, the first thing they ask you to do when you say you want to change your gender is to start wearing the clothings of the new gender you want to become. There was no oyinbo doctor who taught Orompotoniyun this procedure. I tell you, our African fore bears had advanced knowledge that we lost somewhere along the way.

The whole of Yoruba land had heard about the face off and all were looking forward to the D-day.

On the 7th day, Orompotoniyun was waiting at the “ipebi”, the venue of the show down. As each chief entered the venue, they greeted Orompoto grumpily “Bawo ni o”, “pele o, omobabinrin”. Greetings that depict condescension. Orompoto took it all without speaking a word. She mounted the podium and addressed Oyomesi, saying she was ready to show them proof. Orompotoniyun removed the cap she had on. Oyomesi ‘yinmu’ED at her. “Anyone can barb her hair and claim to be a man. Abeg remove your clothes”. Orompotoniyun removed her Buba and Oyomesi saw a chest with breasts molded like that of a man (Masectomy). Oyomesi ‘moju’ED, “Many women have small breasts, that doesn’t make them into men, abeg remove your trousers”, those were the reactions of the chiefs.

At this point, Orompotoniyun started fiddling with the trousers she had on. All the chiefs knew she would be put to shame. There was no way Orompotoniyun would pull this off. The best that can happen is that Orompotoniyun would be a “lakiriboto” (a woman without vaginal opening), there is no way she would be able to conjure a penis. Even if by deceit, she tried to tie on a penis, where would she find a scrotum from? When Orompotoniyun dropped her trousers, Oyomesi was shocked. They not only saw a penis (phalloplasty), they also saw a scrotum sack drooping with two scrotum eggs in the sack. The whole of Oyomesi dropped on their chest in prostration and chanted the greeting of Obeisance at once, Kaabiyesi oooo…. She/He was enthroned as Alaafin Orompotoniyun, Ajiun, arobo se’gun ote. Now popularly praised as Ajiun ar’obo se’te. (Ajiun, the one who has a vagina that quashed treacherous plotters).

Such was the story of Orompotoniyun, the greatest transgender surgeon who performed a transgender surgery ON HER OWN SELF within 7 days. Up till today, no other doctor has achieved the feat. Someday, orthodox medicine would learn the advanced science which our African fathers knew that enabled Orompotoniyun to achieve this great feat. Some would have said this is mere myth, others would say its demonic powers, but when they look at Jenner Bruce, they say its advanced science that the white man uses. To all such people, I say… May the Lord return the brains that was seized from you. Africa had, and still has a science, we only need to seek it and present it in a formal way.

Orompotoniyun went ahead to be a very successful king. She/He built a wall around Igboho which you can still see till this day. She/He devised an ingenious way of moving his warriors to attack enemies in such a way that nobody knew which way the warriors were headed. This she/he achieved by placing the foot soldiers in front and the cavalries on horses behind. Each horse had broad leaves tied to its tail, drooping to the ground, such that the leaves cleans off the footprints of the horses and men on foot.

Orompotoniyun won many wars and kept the capital safe and secured in his/her time.

I came across this and feel it is worthy. I hope you enjoyed the fundamentals in the write up

ALAAFIN OROMPOTONIYUN, THE FIRST AND ONLY FEMALE KING OF OYO was last modified: May 11th, 2020 by Reporter