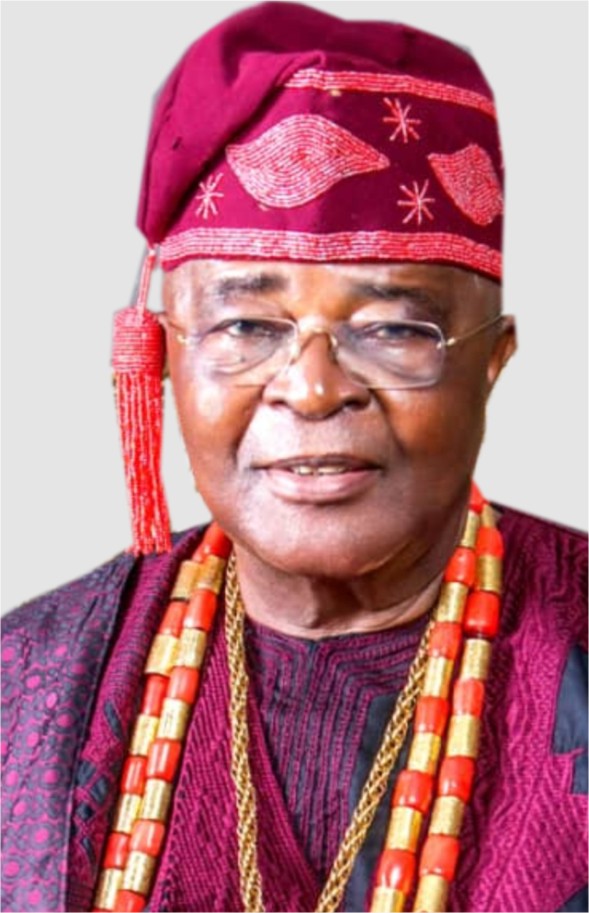 Ake Palace, the seat of the Alake of Egbaland was agog few days ago, as Oba Adedotun Gbadebo (CFR), the Alake & Paramount Ruler of Egbaland celebrated 15th years Coronation Anniversary. The respected monarchy also installed new chiefs into various vacant stool while some new ones were also installed.

The event which paraded many celebrity women of style, business tycoon industrialist to mention.

Oba Adedotun Aremu Gbadebo, who was supported by all Egba High Chiefs and many Ogun Obas installed his new chiefs.

Who are the new Alake Chiefs? How were they selected? City People investigations reveal that the 4 geographical zones in Egbaland have chiefs in Alake’s palace.

The Igbein are always the ones who present the Iyalode and Otun Iyalode And this is applicable to all the major zones in Egbaland. The Apena are always from Itokun and soon and so forth.

Don’t also forget that some of the chiefs are also honourary. The honourary stool were also given to prominent Ogun son’s and daughter’s who have contributed immensely to the development of Ogun in general.

Below are the stories of Alake’s 20 new Chiefs.

Chief Adesina Idowu Adegoke was born in the mid-sixties. His father hailed from Ibadan, Oyo State while his mother was from Itori Oke, Abeokuta.

Aside of the foregoing, he has attended various local and international courses, including Masters in Business Administration at the prestigious Lagos Business School (Pan Atlantic University, Lagos), Harvard Business School, Boston, MA, and London Management Centre, among others.

Chief Adesina Idowu Adegoke is a business professional with over 30 years experience, 20 of which is in a Senior Management position. He is a Biochemist, Food Chemist, Brewer and a Distiller of note.

He is currently the General Manager, Plant Operations of Intercontinental Distillers Limited, Ota with knack for quality and efficiency. He is a seasoned entrepreneur, with passion for excellence in service delivery, time management and customer satisfaction with eyes for details.

Alhaja Chief (Mrs.) Sikirat Ejide Adeyanju attended the Muslim Mission Primary School, Mushin, Lagos and had her primary six certificate in 1960. She furthered her education at the Western College of Commerce, Yaba, Lagos, one of the few Secondary Schools offering Commercial and Business Education subjects in Nigeria at that time.

Alhaja Chief (Mrs.) Sikirat Ejide Adeyanju started her business career in Lagos in the 1970s, selling clothing materials and other related business lines. She later expanded her business interest by travelling abroad in 1978, which involved buying and selling of imported clothes, shoes and bags of high qualities.

In 2005, she veered into investment as a Real Estate Developer in Oshodi, which has become a major part of the success story of the growth of her businesses today. She has, in fact, cut her teeth as an acumen businesswoman many years ago in Lagos.

Alhaja Chief (Mrs.) Taofeekat Abolaji Afolabi was born in the mid-sixties into the family of Alhaji TIamiyu Atanbala Babayemi and Alhaja Fatimot Babayemi of Ikereku, Abeokuta.

Thereafter, she attended The Aviation School for a course in Air Hospitality and graduated with an IATA Certification.

Alhaja Chief ( Mrs.) Taofeekat Abolaji Afolabi trained in textile business under her mother at the famous old Gbagi Market in Ibadan. After acquiring deep knowledge, she moved to the new Gbagi Market, Ibadan, where she started her own franchise. This was her pivot to success as she ventured into other business lines, all of which are very successful. These include: • Real Wax Clothing (Ankara) under the brand name “TAO HI TARGET” • Battery Sale under the brand name “TAO BATTERY” • Importation of Candles under the trade name “TAO CANDLES” • Trading in “BJ” quality soap

Aside of the foregoing, he attended various courses, both in Nigeria and overseas in Oil and Gas, Banking, Finance and General Management. These include: • Kennedy School of Architecture, Harvard University, USA – Real Estate and Capital Market Programme.

He is an Alumnus of Lagos Business School and the Harvard Business School. He is currently pursuing a Law Programme at the University of London.  He is the Chairman of Seagle.

Chief (Mrs.) Ayotunde Olambiwoninu Olasumbo Lawal was born in the early sixties. She is an indigene of Iperu Remo in the Ikenne Local Government of Ogun State.

She co-run Seagle Oil and her husband many businesses.

Chief Omolaja Ayodele Majekodunmi was born in the early seventies into the Majekodunmi family of Igbore, Abeokuta.

• As an Employee. Chief Samuel Okanlawon Oso had a brief stint as a teacher under the Abeokuta Schools Board,

before he secured an appointment as a Clerical Officer at the GB Olivant/BEAM, a Division of UAC Plc, Lagos, where he worked between 1974 and 1977. He later worked as a Purchasing Officer with Messrs GOTOS Construction Ltd., Lagos between 1977 and 1978. Chief Okanlawon Oso later served as the Production/Sales Manager with Messrs Unique Construction, Quarry Division, Oniyanrin, Abeokuta between 1978 and 1979.

Chief (Mrs.) Victoria Adeyinka Oso was born in the early eighties into the family of Mr. & Mrs. Sunday Adeyemo of Igbo-Ora in the Ibarapa Central Local Government Area of Oyo State.

and they have been blessed with promising children.

Chief (Mrs.) Omolara Olanrewaju Rotimi-Shojobi was born into the family of late Chief Aduramo Rotimi who held the traditional title of Oluwo of Kemta township and Oluwo Egba during his lifetime. Her late father hailed from the Pagbon Rotimi Compound in Kemta. Her late mother, Chief (Mrs.) Dolapo Aboaba-Rotimi, hailed from the Aboaba Olode Okuta family of Igbein, who was Balogun Egba during his lifetime. While her paternal lineage held the title of Oluwo Egba, that of her maternal lineage held that of Balogun Egba. The two families therefore, held important positions and participated actively in the Administration of Egbaland.

(AGGS), between 1972 and 1977. After high school, she attended a two-year programme at the Technical School, Idi-Aba, Abeokuta. On successful completion of the programme, she proceeded to the City College of Management Studies in London where she obtained a Diploma in Marketing Communication Studies. She later attended the Magna Carta College, Oxford, where she bagged the B.A. (Hons) in Business Management.

Chief (Mrs.) Omolara Olanrewaju Rotimi-Shojobi worked for Civtra International from 1986 to 1988 after which she joined Goldsby Energy Nigeria Limited, an Oil Servicing Company.

She later joined Morin Investments Ltd. as a Director. In 1993, she founded Larush Property, a Real Estate Company with interest in both Nigeria and the United Kingdom. She is the Chief Executive of the company.

Chief Adebayo Olukayode Sodade, a scion of the famous Esado-Sodade family of Igbein, Abeokuta was born in the late fifties into the family of Mr. Adeniji Sodade of blessed memory and Mrs. Ruth Abike Sodade.

Chief (Mrs.) Victoria Olabisi Sodade started her early education in Owo but later continued at the State High School, Ipaja, Alimosho Local Government, Lagos State where she sat for her West African School Certificate Examination and passed brilliantly. She then proceeded to Lagos State Polytechnic for her HND in Insurance. In further search for the Golden Fleece, Chief (Mrs) Victoria Olabisi Sodade proceeded to Ladoke Akintola University of Technology, Ogbomoso for her Master in Business Administration (M BA), specializing in Marketing. She is a member of the Chartered Institute of Local Government and Public Administration of Nigeria.

Chief Michael Adebowale Sodipo was born in Abeokuta over sixty years ago into the family of Chief Samuel Olufemi Sodipo and Chief (Mrs.) Matilda Ayokunnu Sodipo.

Chief Michael Adebowale Sodipo had his primary school education at St. Peter’s Primary School, Ake, Abeokuta. He was at the Premier College, Abeokuta, Abeokuta Grammar School and Comprehensive High School, Aiyetoro for his secondary school education. He became a Psychiatric Nurse upon graduation from the Neuropsychiatric Hospital, Aro, Abeokuta in 1977. Thereafter, he graduated as a General Nurse from the Ogun State School of Nursing, Abeokuta in 1983.

Chief Oluwaseun Olajide Taiwo is a graduate of the Ogun State University, Ago-Iwoye with the Bachelor of Science Degree in Industrial and Labour Relations.

Chief (Mrs.) Moyosore Atinuke Jide-Taiwo attended Lagos State University where she graduated with B.Sc (Philosophy). She later obtained a Masters’ Degree in Industrial Relations and Personnel Management from the University of Lagos.

Hajia Chief (Mrs.) Medinah Similolaoluwa Ajoke Adegbite was born in the mid-sixties into the family of late Sheik Imam Abdul Wahab Olaonipekun Aminu, from Owu, Abeokuta who was a large-scale farmer during his lifetime and Alhaja Ramdat Arinola Aminu, a Lagos-based businesswoman from Oke-Ona Egba.

Hajia Chief (Mrs.) Medinah Similolaoluwa Ajoke Adegbite was enrolled with a teacher in the neighbourhood of the residence of her parents in Lagos, called Aunty Funke, at age 3 because of her early enthusiasm for learning. Thereafter, her brilliance enabled her to gain admission into St. Philip Primary School, Ilupeju, Lagos in 1969.

In her fifth year in primary school, she sat for a common entrance examination and passed. She was, therefore, admitted into the Lagos Secondary Commercial Academy, Association Avenue, Ilupeju, Lagos. She completed secondary school education with an outstanding result and her excellent performance was attested to by the school’s authority.

Chief (Mrs.) Medinah Similolaoluwa Ajoke Adegbite thereafter got admitted to study Mass Communication at the University of Lagos in 1980. Unfortunately, she decided to withdraw her studentship from UNILAG to take care of her ailing mother. That uncommon decision however, received Allah’s support as her mother’s health received divine restoration.

The Chairman/CEO of the company is Chief Oluyinka Kufile, Oluwo Ijemo and Aro Egba. She left the Company in 1987 and went into private business.

Investment. She has also floated an NGO, named SHABAQ Ladies Foundation, which has empowered many people since its establishment.

Chief Ibraheem Adebayo Bakare had his maiden work experience at the Pan Ocean Oil Corporation at Warri, Delta State where he served the Nation as a Youth Corper. On the completion of his mandatory one year National Service, Chief Adebayo Bakare joined the services of UACN Plc. and was seconded to Mr. Biggs Division of the organization. He rose through the ranks by dint of hard work to the position of an Assistant Manager, before he joined Chevron Nigeria Limited.